Oxendine Barnes & Associates PLLC: Light at the End of the Tunnel 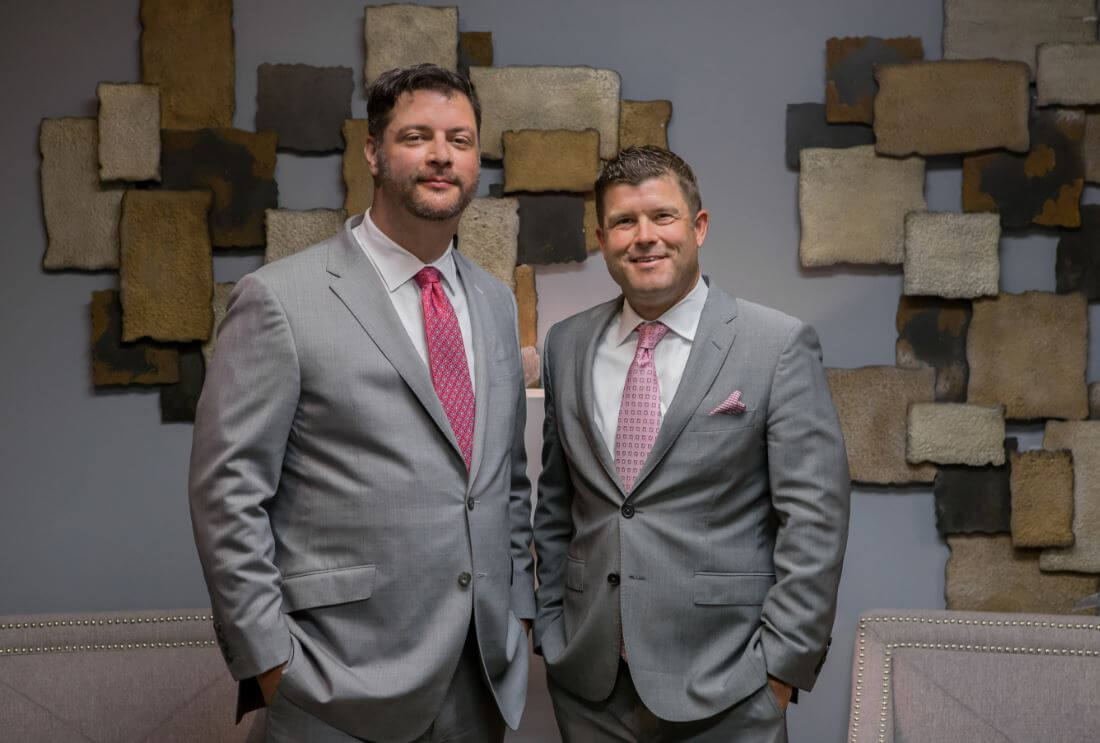 Ryan Oxendine’s face was deep red and dripping with sweat as he trotted off the volleyball court at Springdale Recreation Club during the annual fundraiser in August for the St. Baldrick’s Foundation. His Raleigh-based firm, Oxendine Barnes & Associates PLLC, was one of the sponsors of the campaign that raised $123,000 for research and treatment of childhood cancer.

“Fortunately none of us have had to experience the nightmare of dealing with a child with cancer, but the mission of the Foundation hits close to home,” said Oxendine.

Oxendine and his partner, Jim Barnes detailed a litigation strategy for the firm’s clients that applies the same levels of intensity, focus and teamwork it applied to fundraising for St. Baldrick’s.

“It’s important that we have been there with our clients, laughing and crying and holding hands through their cases,” said Barnes. “Trust with a client is a two-way street. It’s good to build that trust with clients from day one. They trust and respect our opinion even if they don’t agree with it.”

While this sounds like boilerplate lawyer-speak, Oxendine and Barnes are frequently spot-on in assessing the value of a case for a potential new client and how long it takes to complete a case.

“This is the business that we do and through years of experience and working with opposing lawyers, we get a good handle on the value and projected outcomes so we can give a client a good recommendation or analysis of their case,” said Barnes.

The firm handles the gamut of personal injury cases including wrongful death. Some cases have topped $2,000,000. They are among the few PI firms that handle medical malpractice.

Oxendine and Barnes said the hallmarks of their practice are that they leverage their experience to personally shepherd clients from the first day to the last day of a case.

They face some of the same insurance defense firms or lawyers on a regular basis. “We know their MO and how they will react and respond, the numbers they will throw out and the motions they will file,” said Barnes.

“I tell clients don’t take it personally if the insurance company makes a low and unreasonable initial offer. That’s how it works,” explained Oxendine. “I had a mediation in a trucking accident case where before mediation that morning I gave the client my estimate of final settlement. After eight hours of mediation, we settled for that exact amount. It came down to credibility, knowledge and meeting the client’s expectation.”

While Oxendine and Barnes are North Carolina born-and-raised, each came to personal injury law from very different directions.

Oxendine was inspired to pursue a legal career at an early age by the local attorney in his hometown of Robbins, NC, Frank Thigpen. Oxendine was a transactional lawyer from 2001 to late 2010, which is when his father died in an auto accident. He took a year off from practicing law to cope with the tragedy but returned in 2012 as a litigator, launching his own firm. “I empathize with my clients who have lost loved ones in an auto accident. I know what they are experiencing, and can explain I have been in the same boat,” said Oxendine.

A Raleigh-native, Barnes has been an avid golfer since an early age. His career path was to become a golf course architect. But a high school internship with the Wake County DA’s office under Colon Willoughby redirected his plans. “I quickly fell in love with the law profession,” said Barnes.

After graduating from Cumberland School of Law at Samford University in Birmingham, AL, Barnes practiced as an insurance defense attorney. “I learned defense strategies and tactics and about the medicine behind injuries,” said Barnes. “But at the end of the day I wanted to help people and Ryan finally made it happen when he convinced me to cross over to the Plaintiff’s side and join his firm.”

Partners during the week, but foes on the weekend as fervent golfers. Each deny there is any competition. Barnes has a lower handicap, but Oxendine boasted “I joined Raleigh Country Club recently, and now I’m fast behind his trail. I beat him for the first time last week.”

“We just try to beat our sons,” laughed Barnes who has two sons, Avery, 13, and Camden, 10. Oxendine has one son, Hayes, 12, and one daughter, Cate, 9. Avery and Hayes are budding golfers, and each carried their team (which consisted of them and their fathers) in a golf tournament in Wilmington last week. “We finished sixth out of 31 teams thanks to the boys,” said Oxendine.

Oxendine and Barnes are two sides of the same coin. Fraternity brothers at UNC, they are similarly aligned in philosophy and case management.

Where Oxendine is low-key and speaks quietly and deliberately with a Basso profondo voice, Barnes is chipper, gregarious, and personable. They are perfectly cast to play good cop/ bad cop.

“Sometimes I play the bad cop and Jim plays the good cop. The goal is to give the client clarity when an important decision needs to be made in a case,” said Oxendine.

“The wheels of justice grind along very slowly but I tell my clients there is light at the end of the tunnel,” said Barnes. “The process can be very discouraging in terms of how much they think their case is worth and how long it should take is counterintuitive to what they see on TV in an hour-long show.”

“We can’t make everybody happy, but we can do our best at trying to make a positive change in a bad situation,” said Barnes. “We may not make much money on some cases but there is a value in making a difference in somebody’s life that you can’t put a dollar figure on.” Oxendine agrees and adds “No amount of money is going to change your life after an injury or bring someone back, but a lot of times we feel like we can give a client some closure.”