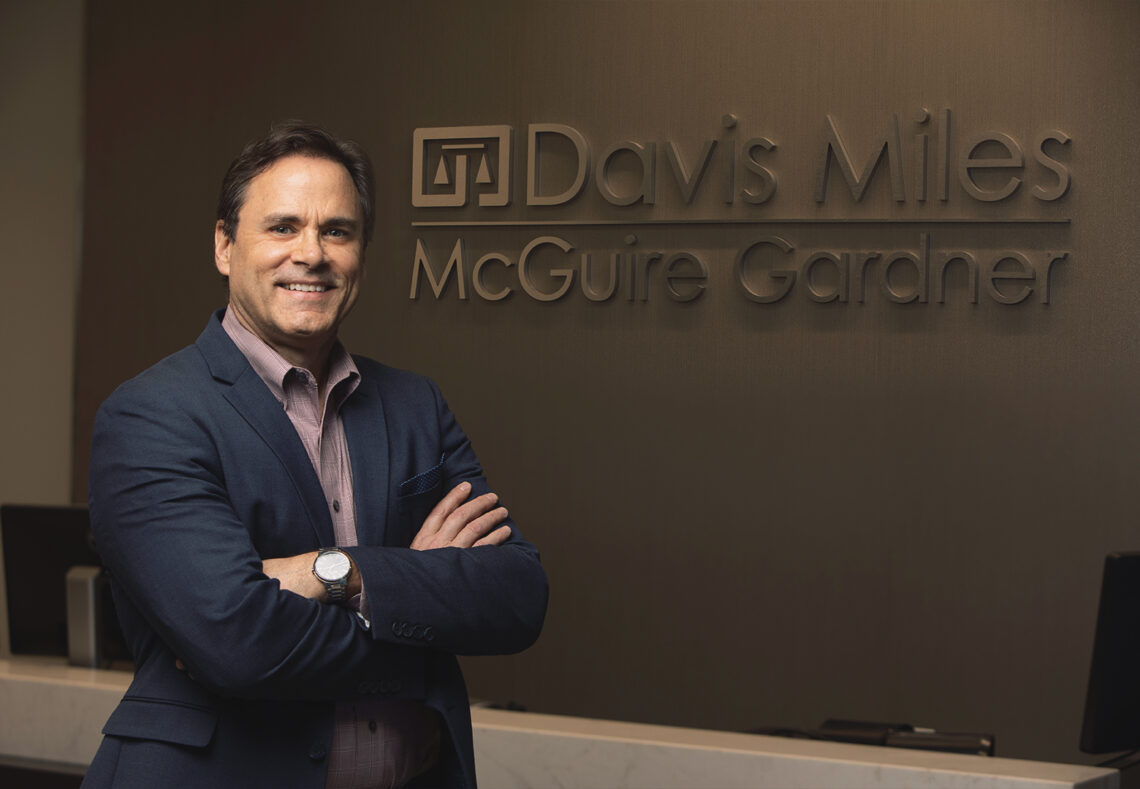 “As in all facets of life, you have to be willing to embrace change. If you do so, you can thrive.”

As managing partner of Davis Miles McGuire Gardner, Pernell McGuire certainly knows something about change. At the helm of Arizona’s sixth largest law firm, with additional offices in New Mexico and Utah, McGuire has navigated myriad ebbs and flows while all the while building, growing and expanding.

“When this pandemic hit there was a lot of uncertainty and people were pulling back, and my message to our attorneys was that we need to embrace this challenge and work for ways to meet our client’s needs. Many of those needs changed dramatically because of the pandemic,” he says. “Our business clients were particularly impacted and were themselves having to adapt and change the way that they did business in order to survive.

“We needed to make sure we were prepared to handle whatever legal needs and requirements that came about due to this,” he continues, “and that’s just what we did. Because of that, our firm had a pretty good year in 2020.”

In his own practice, McGuire looms large with the skills and reputation befitting an accomplished attorney who has been certified by the Arizona State Bar Board of Legal Specialization as a specialist in bankruptcy since 1999.

McGuire has personally handled thousands of bankruptcy and collection cases on behalf of both debtors and creditors in state, federal and tribal courts in Arizona, Utah, Colorado, Nevada, Texas and New York. His capacity to discern shifts and fluctuations, even anticipate potential ramifications, has made his advice and legal acumen virtually indispensable providing bankruptcy and debtor/creditor services to people and businesses throughout Arizona for over 25 years.

Like most extraordinarily successful and influential professionals, McGuire’s preparation for carrying such weighty responsibilities began early. Between the guidance of his parents and the strong influence of their church, McGuire recognized the value of setting goals and hard work from a young age.

“When I was in ninth grade, one of our church leaders had a hardware store and lumber yard. I was always bugging him for a job,” he recalls. “He finally relented, and I worked for him off and on (when I wasn’t playing sports) for the next five years. He taught me the importance of work.

“I recall he once donated all the lumber to rebuild a home for someone whose house had burned down. He took me with him along with several volunteers to rebuild this home. He taught me how to work hard and serve others and was a strong influence in molding me into the type of person I wanted to be.”

Another early mentor in the young man’s life was a high school English teacher. “I hated English,” McGuire admits with a smile.

“However, this particular teacher really expanded my mind to the importance of using the English language to convey important ideas and more importantly its persuasive power. Previously, I really didn’t appreciate the power and influence of mastering the nuances of language and how important it would become to me as an attorney,” he adds. “Coincidentally, I later learned her husband was an attorney. I ran into him many years later when he was the presiding judge in a case I had.”

“I think I had some feeling about becoming a lawyer when I was still quite young,” says McGuire. “We had a close family friend and church leader who was an attorney. He was a man I greatly respected and admired. He was probably the only attorney that I actually knew, and he was a great example to me. I think a lot of my perceptions about the law came from the media – you know, going to court, making great arguments and hopefully winning.

“Although my first name is Pernell, my mother gave me the nickname Perry. Of course, Perry Mason was probably the best-known TV attorney at that time, and I was able to at least watch reruns so I think that was my introduction to what it meant to be a lawyer,” he adds with a laugh.

“In real life, I was always drawn to a good argument. I participated in speech and debate in high school and enjoyed the precepts of law itself. I wasn’t sure then if I actually wanted to become a lawyer, so in college I entered the business program with the idea of being a finance major. However, I ultimately decided I wanted to go to law school and changed my major to accounting because I thought that would be a good undergraduate degree.”

Attending Brigham Young University for both his undergraduate degree and Juris Doctor, McGuire was not your typical law school student. Already married with a young family, life became a balancing act for someone as committed to both family and the law. Interestingly, his second daughter was born on his first day of law school and his third daughter was born during his final year. (Eventually McGuire and his wife, Nancy, who he met in middle school, would have six children and 13 grandchildren and counting!)

“Going into law school I had very little idea of how competitive it was going to be to find my place among my peers,” he says. “I learned how to compete and realize the price that needed to be paid in order to succeed. I had to make adjustments and modify my behavior so that I could compete.

“I did feel that I had a good mind for the law,” says McGuire. “It made sense to me. However, attending law school as a husband and father of three made balancing my time between familial responsibilities and studies a definite challenge. That, of course, required me to become a lot more disciplined and circumspect with my time.”

Between his business acumen and experience running his own firm, McGuire arrived in his position as managing partner amply qualified for the role. Ironically, as he confesses, one of the “perks” about the 2011 merger between his firm and what was then Davis Miles PLLC, was the idea that he would no longer carry the added weight of running a firm.

“Charlie Davis was the managing partner, but five years later, I got drafted. It was good while it lasted,” he quips good naturedly.

Since taking over as managing partner the firm has grown in size and revenue with an increase over the last five years from about $12 million to over $21 million.

“Seeing the growth has been very rewarding,” he says. “The numbers are not as important as what it reflects about us. Our attorneys’ practices are growing and expanding which means our clients are taking notice that we have quality attorneys who can provide proven results and are coming back for those services time and time again.

“We’re also proud that one of our areas of emphasis is on diversity,” notes McGuire. “Just in this past year, three out of the four newly hired attorneys are female, and we’ve hired a legal intern from ASU as part of the diversity legal writing scholarship program. We’ve also recently made a donation to ASU’s law school public interest fellowship program focusing on tangible social justice reform.”

Embracing change is a recurring theme for McGuire. Recognizing when and how to adapt, adjust and advance is an essential part of his and the firm’s continued success.

“We’ve recently gone through a bit of a transition,” says McGuire, “our two founding members have stepped back a little bit from the practice and are turning the reins over to the younger horses who, thanks to excellent mentorship are eager and supremely qualified to help carry us forward.

“Charlie and Greg are still very much a part of the firm,” he adds, “but it’s a new chapter and era. As we move forward, we are bringing on a good stable of new equity partners who are excited and motivated to take us to the next level. We’re all very excited. With the foundation these two talented and accomplished men have helped create, we plan to double our revenues again in the next 10 years by expanding existing practice areas and adding new ones so that we can continue to meet our clients’ needs.”