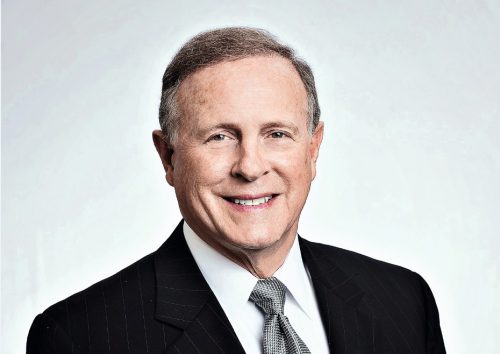 Rod Steakley: Playing at the Pinnacle

Few attorneys can cite more illustrious gridiron experiences – or courtroom experiences – than Roderic “Rod” Steakley. The longtime Sirote & Permutt partner in the firm’s Huntsville office has packed a lifetime of experiences into a stellar legal career.

From being given instructions on the next play by the great Alabama coach Paul Bryant and defending the Hunt brothers of Dallas, Texas, when they were accused of trying to corner the world silver market to representing a small Alabama shipbuilder against the likes of General Electric and litigating on behalf of a Huntsville engineering firm against an aerospace giant to secure the rights to perform work on the Space Station, Rod Steakley has seen it all.

“I feel I’ve been greatly blessed,” Steakley says. “I’ve had the privilege to work on cases, the magnitude of which I never imagined in law school.”

Steakley was born in Tuscaloosa while his parents were finishing their education at UA and raised in Huntsville. During those years, as Huntsville’s population mushroomed following the Army’s decision to centralize rocket and missile development at Redstone Arsenal, Steakley found most of his classmates to be from somewhere other than Alabama.

He did well at Huntsville High, both academically and athletically, and earned a football scholarship to the University of Alabama after walking on his freshman season. In 1967, that meant he would play for the legendary Paul “Bear” Bryant, who after eight years as head coach of the Crimson Tide, was forging a legacy of winning.

“Alabama had just won three national championships under Coach Bryant. And, given the dramatic national and international events of the late 1960s, the entire program was undergoing a transition,” Steakley says.

Part of that action was a return to a stronger emphasis on the team, rather than reliance on the talents of a few gifted players. Bryant drilled his players to meticulously execute the fundamentals as a team. Steakley remembers it as a three-part plan.

“First, he taught us to prepare wisely, to establish and prioritize goals, to develop a superior plan for all that we did, to be committed to winning whatever the cost. Second, we had to play each down like the game would be decided on that play. Finally, there was the emphasis on excellence. He insisted upon that. Coach Bryant wanted the Crimson Tide to always be a class act, to handle ourselves with excellence both on and off the field.”

“Lots of teams talk about winning the national championship, but few actually envision themselves winning that championship ring,” he says. “Those concepts that Coach Bryant drilled into us form the principles upon which I practice law.”

After earning his Juris Doctor from the University of Alabama School of Law in 1976, he clerked for the Hon. J. Foy Guin, U.S. district judge for the Northern District of Alabama. “He was a great influence on my life, both legally and otherwise.”

Shortly afterward, he accepted a position with Shank, Irwin & Conant of Dallas, Texas. The next 10 years would bring him into contact with some of the most powerful people in Texas, and involvement in cases that have become part of American history and folklore.

Some of Shank Irwin’s major clients were oil and gas interests and mining companies. Before long, he found himself involved in the largest mining disaster in North American history. When 92 miners were killed in a mining accident, Steakley participated in the trial of that case for over seven months.

Another major client was the famous Hunt family, who had become billionaires in the Texas oil and gas boom. Success seemed to drip from the Hunts – following their father’s success, the sons went on to build the family fame and fortunes through ventures in energy, real estate and sports franchising. The youngest brother, Lamar Hunt, made a name for himself by founding the American Football League. He owned the Kansas City Chiefs until his death.

Steakley represented members of the family in suits throughout the country arising from alleged efforts in 1979 and 1980 to manipulate the world price of silver.

Returning to his native Huntsville in 1987, Steakley took a position with Sirote & Permutt’s Huntsville office. As a shareholder in a firm respected in many specialties, he soon found himself litigating on behalf of commercial firms embroiled in disputes with other government contractors.

One memorable case involved a shipbuilding firm in Bayou La Batre, just south of Mobile on the Alabama Gulf Coast. The U.S. Coast Guard put out a RFP for development of a sea-based aerostat, a type of dirigible-borne radar system. Steiner Marine had a teaming agreement with a huge, international government contracting firm.

“This firm put together a team to build these aerostats on ships as a way to elevate the radar above the horizon without having to have an airborne vehicle, an AWAC if you will, on station. The Coast Guard wanted to deploy these ships primarily in the Gulf and around the Caribbean for drug interdiction and other security purposes.”

“There is no question this was a case of a big contractor trying to bully and take advantage of a smaller contractor. If this litigation had not succeeded, my client would have gone bankrupt. They would have lost their shipyard, so we were literally the David against the Goliath,” he says.

Steakley smiles broadly as he recalled the trial and verdict. “The three-month trial took place during the first Gulf War. The jury was impaneled as the war began, and returned the verdict literally at the end of the Gulf War. When the Mobile Press Register wrote an article about the $51 million verdict in favor of my client, they called it the ‘Gulf War Jury.’”

Steakley’s practice, and that of the great “team” of lawyers with whom he works at Sirote includes substantial emphasis on government contracting and related disputes, where he and the team have recorded a number of significant victories, some involving hundreds of millions of dollars.

Rod Steakley has had a long and illustrious career, but shows no signs of slowing down. “It’s all still too much fun. It makes me want to get up every day, just to meet that day’s challenges on behalf of our clients.”

And the lessons from the Bear are almost too numerous to list. “I suppose, summing it up, he taught me to set my targets and goals high, and not to compromise until I have achieved them. This is our shared vision here at Sirote & Permutt. It’s what we do for our clients.”

A featured attorney from the SEC College Football Special Issue.