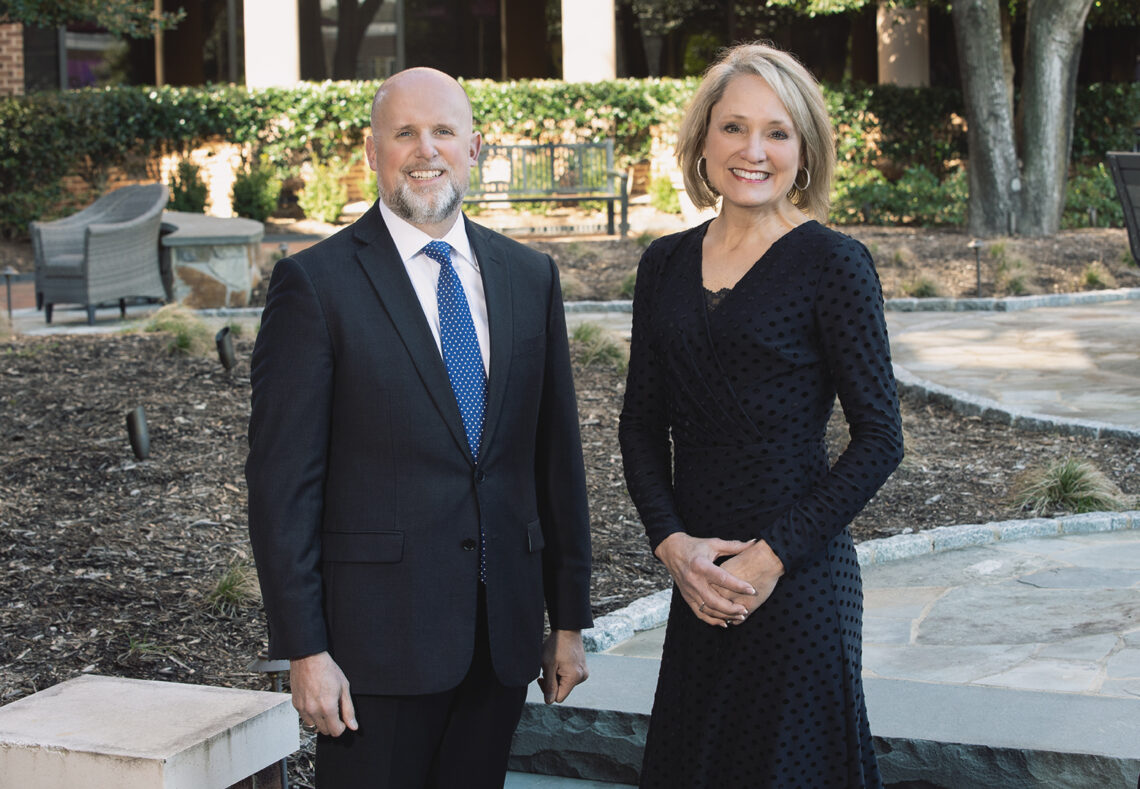 In family law, ending up in front of a judge is akin to choosing surgery when a diet change would suffice. In other words, a much greater risk for minimal return. Minimizing your client’s risk while providing them the greatest possible control over their case is best achieved through mediation or even arbitration. Former family law judges, Kristin Ruth and Michael Denning, who joined Smith Debnam’s family law group in 2014 and 2020, respectively, share that philosophy.

Ruth and Denning enjoy applying their experience on the bench when working with clients and sharing their views from the bench with other members of the firm’s family law practice.

Denning served as a Wake County District Court judge for 10 years, six as a family court judge. “Mediation allows you to educate clients on the risks involved in litigation,” said Denning. “The truth is sometimes a judge cannot see things the same way a client does. Shortly after a judge meets a litigant for the first time, he or she will rule on some of the biggest areas of their life – rulings that will have lasting impacts for everyone involved. For clients, there is a significant amount of risk in that. It’s always going to feel better to a client if they are the ones controlling their destiny rather than letting a judge decide it for them. Mediation lets them do that.”

Kristin Ruth served as a Wake County District Court judge for 13 years and handled family court for most of those years. “I tell my clients that, at best, a judge only gets a snapshot of their lives. Unlike a court proceeding, mediation provides a mechanism to engage with both parties to fairly evaluate the priorities and concessions needed to reach a satisfactory resolution. As a mediator, our job number one is to be a skilled listener – to understand the desires and concerns of both parties and that of their represented council. This understanding leads to thoughtful inquiry and constructive follow up, both of which are instrumental in helping all parties identify their case’s strengths and weaknesses while appreciating the risks involved in litigation. These are the essential ingredients to a successful mediation.”

“Money and children tend to be the issues that end up in front of the judge,” said Denning. “Family law is complex, and it envelopes individuals at the center of disputes. Sometimes parents don’t have any problem with their current custody arrangement, but by God, somebody will keep the house, or somebody wants the piece of antique furniture, and that’s the keystone issue. Generally, if you can resolve the keystone issue, everything else falls into place. Many times, mediation is about identifying that one issue—whether emotional or property-related—that proves a major sticking point and devising a pathway toward a resolution both parties can feel good about.”

“Exceptional mediators can ascertain the priorities for both sides during the initial meeting, and quite often, a divorcing couple’s priorities are very different,” said Ruth. “The greatest thing about mediation is that at the end of the day, when the parties have reached a settlement agreement, these individuals can wake up the next morning and begin a new chapter in their lives.”

Importance of Being Heard

“As a judge and mediator, when we have a settlement, we want it to stay settled,” said Denning. “Through my years of experience, I’ve learned what’s most important ultimately is not who gets what property, but how the individuals got there during the process. After a 20-year marriage, many times one party simply needs to have their voice heard. They know intrinsically where it’s going to end up, they just don’t want to go there without someone acknowledging their pain. It’s important to help people listen to each other and hear each other. As a judge, I found the more people participate, regardless if they have to give something up or not, the greater the odds are the deal is going to stick because it wasn’t imposed on them by somebody else.”

“Mediating a divorce carries additional benefits for clients over the traditional litigation process,” said Denning. “One such benefit is the scheduling flexibility associated with not having to adhere to the hectic nature of an overburdened court system. Another is that, unlike an open court proceeding, mediation is a confidential process, meaning what one spouse says to their attorney about the other spouse doesn’t become part of a public record.”

The lack of privacy in open court is worrisome for some couples, especially those with children, Denning notes. “If the reason for the couple’s relationship dissolving involves any unsavory behaviors, it’s reasonable to expect they would prefer an alternative process that addresses their privacy concerns. In court, privacy is out the door because it’s all coming out on the record, and it will be there, forever.”

Ruth credits her life experiences growing up on a farm in Kansas and her early career at American Airlines in preparing her for life in public service.

“I found that my early experience with people of different cultures, lifestyles, and socio-economic backgrounds cultivated in me a perceptive ability to recognize the unique qualities of every individual and navigate cases accordingly, through knowledge, patience, and understanding,” said Ruth.

She adds that mediation is an important extension of her work because it provides an effective and efficient alternative to the protracted nature of litigation. “A mediator’s role is to help individuals clarify issues in a safe setting in order to negotiate ‘maximum benefit’ solutions that work for both parties,” said Ruth. “Effectively done, mediation empowers the participants themselves with control over the outcome.”

Ruth is an avid equestrian and enjoys the country life in New Hill with her husband, Preston, along with their horses and Australian shepherds, Nell and Babe.

She earned her Juris Doctor from Campbell Law School and is currently on the board of Carolina Dispute Settlement Services. Ruth is a certified family financial mediator and a certified superior court mediator. She has written and lectured nationally and internationally on dispute resolution, including speaking at the 11th annual United Nations Crime Congress in Thailand in 2005.

Michael Denning’s early judicial training came as the seventh of 12 children (four of seven boys) growing up in Estes Park, Colorado. “Being from a large family, as a matter of necessity and survival, I learned to shut up and watch people and read them well, which has been helpful as a judge,” said Denning.

For over 10 years, Denning served in the U.S. Marine Corps, spending most of his time as a Marine security guard at U.S. Embassies in China, Japan, and Indonesia, and briefly in Mongolia.

He earned his Juris Doctor from Campbell Law School. In 2010, he was elected to the district court bench. Denning is a certified family financial mediator through the N.C. Dispute Resolution Commission.