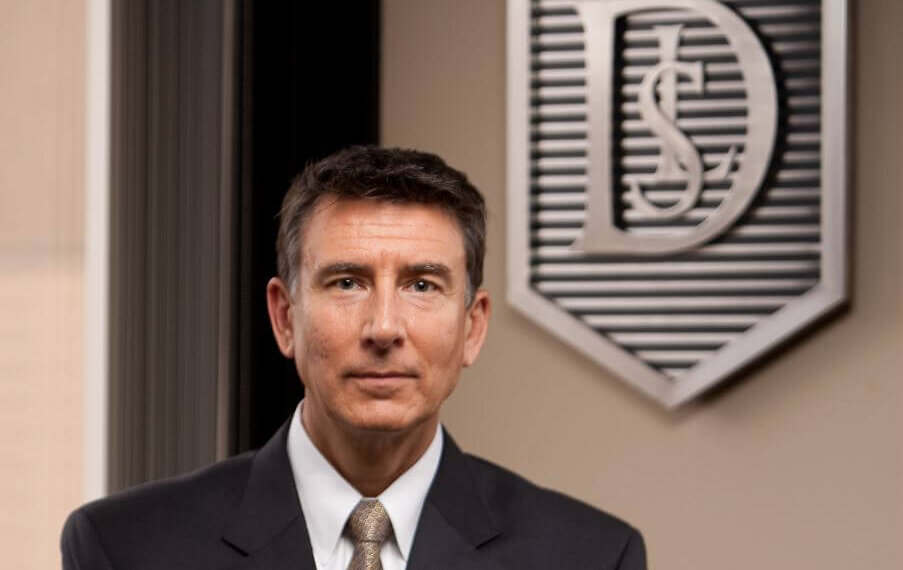 Like other elite criminal defense attorneys, Stephen Duncan was a decorated prosecutor before he went into private practice. A decade of high-profile cases with the Maricopa County attorney and Arizona attorney general provided Duncan with experience and insight he now uses to serve his clients.

Classic American Tale Duncan learned the value of hard work and helping others as a young man growing up on a farm in the Midwest. “People took care of each other,” Duncan reminisces. “You’d help your neighbor build his barn and he’d help you bale your hay.” The values instilled in him by his family and community guide him to this day.

He knew from a young age that he wanted his life to make a difference and that he would have to work hard to have that impact. He paid his way through college as a carpenter and truck driver. Duncan later interned with the San Diego district attorney while in law school. The DA was impressed with his skill in trial and called Duncan “a young prosecutor with the characteristics of a seasoned veteran,” Duncan says.

The San Diego DA spent the rest of Duncan’s time in law school recruiting him to join the office. “He would call the dean to pull me out of class to speak with him,” Duncan recalls. “He said he wanted to make sure he got me first.” Despite the hard sell, Duncan had to decline. He was headed to Phoenix in order to practice law close to his family.

Dedicated Public Servant Duncan started his career as a deputy with the Maricopa County Attorney’s Office. He prosecuted hundreds of felony cases from DUIs to homicides. This wide variety of experience became the foundation for his skill as a defense attorney. “Litigation is tough,” Duncan said. “In front of the judge and jury, there is no substitute for experience, presence and reputation.”

As an assistant Arizona attorney general, Duncan’s tenacity and strong character were obvious to his superiors. He cut his teeth in the criminal appeals section under the tutelage of the Honorable Crane McClennan, who literally wrote the book on criminal procedure in Arizona. Duncan was also entrusted with the most complicated criminal matters when he was promoted to the organized crime and fraud trial division.

“My time as a prosecutor was invaluable,” he explains. “I worked with smart people and learned how the process works from the inside. In fact, numerous colleagues have gone on to become senior prosecutors around Arizona or judges I now appear before on a regular basis.”

Perhaps the most important aspect of his time as a prosecutor was what he learned while working for the Honorable Grant Woods when he was attorney general. About Woods he says, “He has inspired me to champion each case as though it was my only one.” Duncan and Woods have maintained close personal and professional ties ever since. They have shared office space for the last 10 years.

Criminal Defense at the Highest Level After more than a decade as a prosecutor, Duncan was ready for a new challenge and decided to put his experience to use in criminal defense. “I wanted to be my own boss and to do the work that mattered the most to me.”

As a defense attorney, Duncan will go halfway around the world to fight for his clients. In 2011, he flew to Sarajevo in Bosnia when a client faced the death penalty. “I needed to speak with witnesses and obtain documents in order to save his life,” he explains. “The only way to do that was to knock on some doors.” Duncan coordinated with the Bosnian Embassy and Bosnian Consulate, then spent a week on the ground to gather evidence and record interviews. After this material was presented to the prosecutor, the death penalty was dismissed.

While not every one of his clients faces the death penalty, Duncan’s policy is that he treats every case like it is a matter of life and death, “Each client’s case is the most important one in the world to them whether it’s a felony or misdemeanor. It’s my duty to represent each client with that in mind.”

Unparalleled Commitment to Clients “Excuse me for a moment,” Duncan says, as he steps out to take a call, “I’ve been waiting for this.” Upon returning, he explains, “That is what I like best about what I do. As soon as we’re done here, I get to tell a client the police investigation just went inactive, and now my client will be able to enjoy the holidays with his family.”

When Duncan started his own firm in 2001, he had a clear goal in mind, “I wanted to have a practice that I would like as a client.” This meant the sort of personal attention that can only happen at a boutique firm. “It’s me and a few dedicated, longtime employees,” he says. “We really get to know each client and learn the case inside and out. That’s the best way to make sure that every case receives the attention that it deserves and the resolution my client needs.”

Duncan’s track record speaks for itself. He is proud to report that as lead counsel, he has never had a client sentenced to death row. Duncan has represented clients ranging from Toyota to the Marquee Theatre to the Wrigley Mansion. He has defended people in some of the largest and most complicated criminal matters in Arizona, including the biggest police investigation in the history of the city of Peoria and the largest DNA investigation in the history of the Phoenix Police Department.

On occasion, he even returns to his roots as a prosecutor. The Honorable Terry Goddard appointed him as a special assistant attorney general to assist with the grand jury. When the Apache County attorney wanted to investigate the sheriff for potential corruption charges, they deputized Duncan. The sheriff in question, Brian Hounshell, was indicted and pled guilty.

When asked about his most difficult case, Duncan did not hesitate, “State v. Farinas. Three cases, actually. My client was charged in three separate homicides, two of which were death penalty cases. The state had eyewitness testimony, cooperating witnesses . . . you know, the works. It took a couple of years, but we got all three dismissed.”

Life Outside the Office In his free time, Duncan likes to be outdoors in the Arizona wilderness where he camps, hikes and fishes. As a member of the Phoenix Country Club, he is an avid golfer. Although he enjoys his hobbies and his career, his first priority is to spend as much time as he can with his family.

“I’ve been married to the love of my life for 29 years and have two grown sons,” he says. “The oldest is a fantastic chef and the youngest is a fighter pilot in the Navy. I couldn’t be more proud of them.” About his wife, “I wouldn’t be the man I am today without the love and support of my wife. She’s had to put up with a lot of late nights and long weekends. Her love and support makes it all possible.”