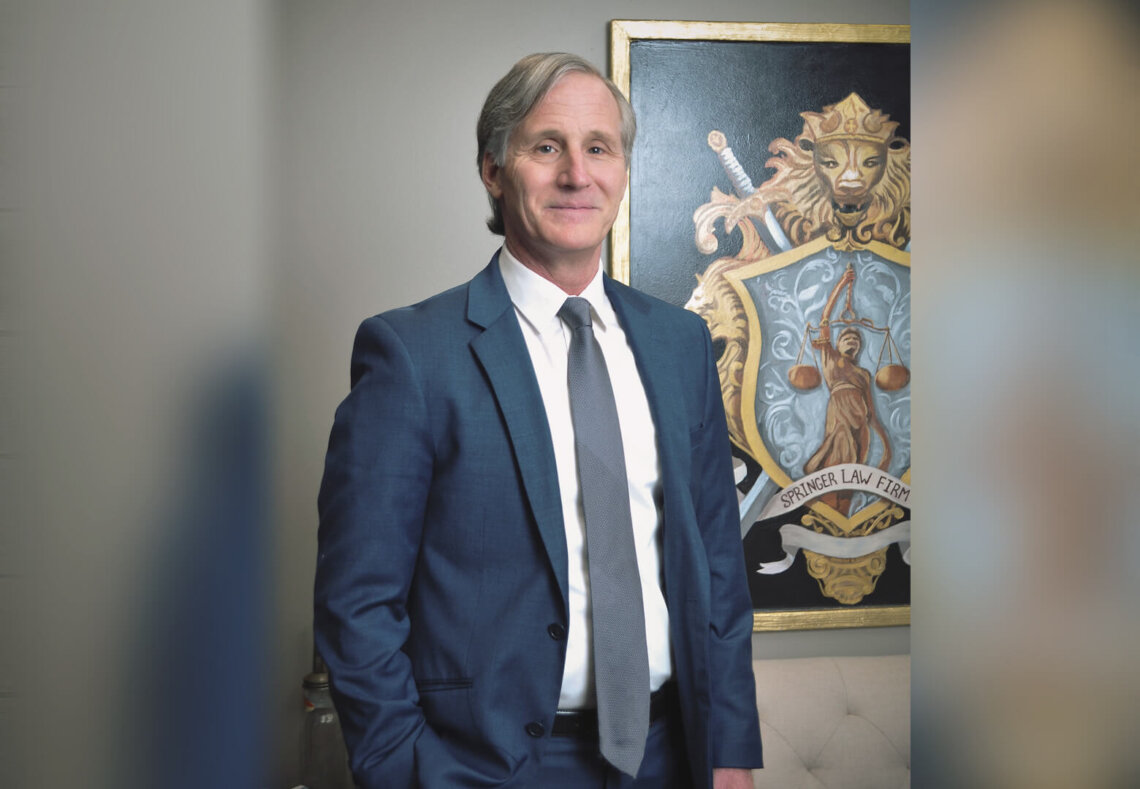 A first meeting with the average attorney is a somewhat predictable experience. Most fit a certain mold: smooth, well-spoken, with a certain lawyer-like style. Stewart Springer does not fit that mold. He might better be described as an unconventional, raw, somewhat unvarnished, but passionate advocate of legal justice who fights for his clients like few other attorneys will.

Ask other lawyers about Springer and they’ll also use terms such as “maverick,” “unconventional” but yet “well respected” and “highly skilled.”

In his youth, Springer never knew or suspected he would end up being a lawyer. There was no tradition of law in his family, and his high school and undergraduate experiences gave little hint that he would choosing law as a career. Average grades at Birmingham’s Berry High School and the University of Alabama, and extracurricular activities limited to cross country track and wrestling, gave little indication of a legal future.

The spark that ignited the desire to go to law school came not long after he had a runin with a car dealership over a “lemon” he had bought and the realization that “people really have little chance of winning against big businesses without a lawyer.”

But getting accepted to Cumberland School of Law was not a cakewalk. “I had to beg my way in,” he laughed, “I had spent four years at Alabama making the best of things, but my education was not one of those things.”

“I remember asking Judge John Haley and Professor Herbert Peterson to help me become a great trial lawyer. They were amused at my bold request, but both said yes.

Springer recalls getting serious once he arrived at Cumberland, knowing he “probably wasn’t going to make it” but that fear drove him and motivated him to pour on the effort and make up for all he had not learned. In his desire to succeed, he quickly enlisted the help of two prominent faculty members. “I remember asking Judge John Haley and Professor Herbert Peterson to help me become a great trial lawyer. They were amused at my bold request, but both said yes.”

Peterson recalls with admiration other Cumberland faculty who helped mold his future success, people such as constitutional law professor Bo Cole, contracts law professor Brad Bishop, and torts professor Edward Nelson. “They were all just brilliant people,” he said, “and I was fortunate to learn from them.”

There was also the shaping influence of Cumberland’s nationally-recognized trial advocacy program. The hundreds of hours spent preparing for and participating in mock trials and moot court competition honed his trial skills. “I would have to say that I could not be where I am today without those experiences.”

He’s maintained a relationship with Cumberland since his graduation in 1990, and from time to time serves as a judge in student mock trials. As an adjunct law professor at Birmingham School of Law, Springer taught trial advocacy and was very proud of his team ranking high in mock trial competitions. A trophy presented to him by his students occupies a prominent place in his home.

He loves being a plaintiff’s attorney. “It’s the area of law that allows you to make the greatest impact.” Springer feels it is part of his duty and responsibility as a trial lawyer to make things safer for others and their children. He gains strength from his desire to “make the community safer.”

This maverick lawyer’s passion extends to other areas attorneys don’t normally venture into. “I’m a member of MADD (Mothers Against Drunk Driving). I’m crazy passionate about stopping drunk driving through enforcement of the law. As bad as that is, now we have the problem of people being killed, or killing others, by texting while driving. Drunk driving and texting kills hundreds of people every year for no reason. It is shameful and has to be stopped. Juries can help make it stop.”

Springer goes to great lengths to avoid settling drunk driving cases out of court. “If someone gets injured by a drunk driver, I want to get all the law will allow. I just hate it when the insurance company offers their policy limits and traps me. That’s their easy way out.”

That passion for injury victim’s rights is shared by his staff. “I work with Marianne, Kristina and Katie every day trying to make them as close to lawyers as possible. Some don’t realize the value of the people with whom they work and they don’t invest time teaching them. I spend hours teaching them and I am so blessed to have them.”

His passion for the sanctity of the Seventh Amendment gives him the aura of a John Grisham novel main character. “Our right to trial by jury is the only thing that levels the playing field between the haves and the have nots,” he says. “Without the right to trial by jury my people have no rights, and big business and government know that.”

TAKING ON THE CITY OF BIRMINGHAM

Springer recalls several unusual cases from a law career that now spans almost three decades, but none stands out like the client he inadvertently ended up representing in an unlawful arrest case. The defendant? None other than the City of Birmingham.

Eric Major, a former Alabama state senator, was arrested for assault, but the criminal charges were dismissed. The mere wrongful arrest had huge political ramifications for Senator Major. Major sued and Springer represented Major against the city at trial. “I knew I didn’t have much of a chance against the entire legal department of City of Birmingham but I just didn’t care. I knew we had to do what we had to do. I was scared – I remember doing deep breathing, trying to get air into my lungs when I started that trial.”

The wrongful arrest, Springer says, was simply a political hit job against Eric Major “and the jury knew it.” At trial, Springer introduced clear-cut evidence of Major’s innocence and told the jury the arrest was politically motivated. He recalls staring into the faces of what he described as “one of the most conservative juries you could imagine, with small business owners and a few folks irritated at even being there. But as the evidence was presented, I could see their expressions change.’”

That jury found for Major and awarded $500,000. “They knew those city officials had lied. A few jurors came down and hugged me and said they wanted to give him a few million dollars, but they could only agree to $500,000.”

It was such an emotional experience for Springer he almost broke down crying. “I was proud of that jury doing the right thing.”

SHERIFF’S CITIZEN OF THE YEAR

He laughs and says there are “more than a few stories people will tell about me. The ones that sound good are not true, but the bad ones are.” He said the judges and lawyers seemed to have been most entertained by an incident from many years ago when, being at the right place at the right time, Springer helped foil a robbery and apprehended the assailant until police arrived.

Eating breakfast in his favorite place next to the courthouse downtown, he looked outside and noticed a man with a large knife try to rob an old man. Despite being warned by the owner of the restaurant to “stay out of that” Springer ran outside to confront the attacker.

“The guy lunged at me with the knife, and took a big swipe at me. I jumped back, and he took off running.” A runner himself, Springer chased the man into the adjacent parking garage, cornering him at the exit gate, and flailing into him with bare knuckles. Soon a squad car pulled up, and the officer – who knew Springer – just grinned. “Mr. Springer, what have we got here?”

The story made the front page of the Birmingham News. “I didn’t think much of it but the judges told me that they were proud of me and the lawyers had a good time making fun of me about it.”

“I am not much like most lawyers as I don’t have the pedigree, I was never smart like them in school and I sure don’t have that high class.” Springer says. Despite being different Springer says, “I love lawyers.”

His nice guy but eccentric behavior just paid off again with a $350,000 verdict, proof positive that being unconventional can pay off.

FAMILY IS ALL IMPORTANT

Springer admits that his legal career does take time away from his family. However, he adores his daughter Caroline who is eleven and his wife Alli who “learned the value of hard work at an early age. Alli was raised in Cullman, Alabama, where she bailed hay, churned butter with her grandmother Recce, and worked cleaning teeth in her father’s dental practice. She learned to cook like nobody’s business from her Momma Kaye. He says of her “Alli is tough as nails and a beautiful person inside and out.”

Even his family life, though, has had its share of trauma. An ugly divorce he endured in 1998 when his now adult children were young brought home the stark realization of the “ugly world of domestic relations where anyone can say anything and there were no rules of evidence.”

Springer took on the judge that handled his divorce case and worked to ensure he was not re-elected. He was sanctioned for his negative public statements about the divorce judge. “It all worked out in the end,” he recalls. “My children, Russell and Julia, now know what happened and why.”

Still eccentric, he wakes up every morning at 4 a.m. and runs with a group of guys. He says “Alli will often join us for our runs at 4:30 and it is pretty funny how the guys give me grief when she runs with us.” Springer has completed three Ironman competitions where he swam 2.4 miles, bicycled 112 miles and ran 26.2 miles, many other distance triathlons and “too many marathons and road races to remember.”

With a chuckle he recalls the last three miles of the Marine Corps Marathon he ran a few years back in Washington D.C. “I bought these Thorlo camping socks to run in, but they were too thick and lit my old feet on fire. I took those things off and threw them on the side of the road and ran barefoot for the last few miles of the marathon. People were laughing at me about running barefoot in a marathon.”