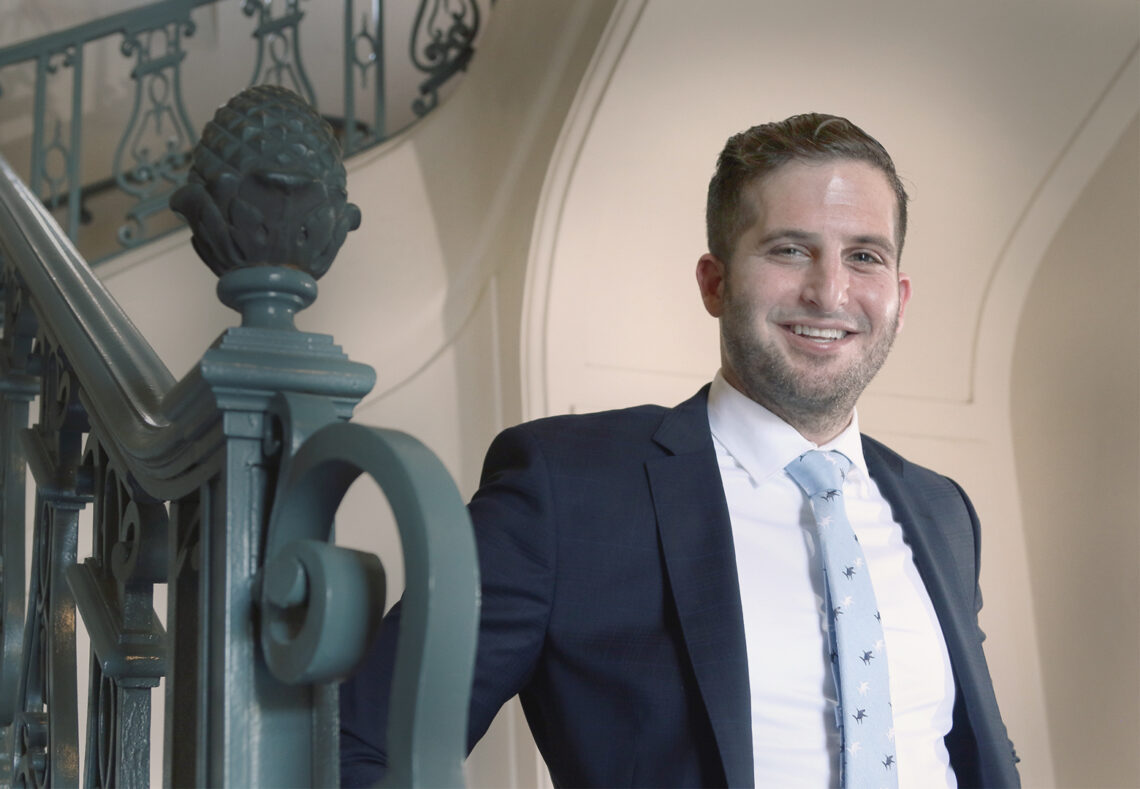 His name is Andrew Leventhal, and he is an attorney.

His story is not unlike many others—one that includes the highs of winning victories for clients and the lows that come with the realization of the gravity of his work in criminal defense. It’s a thirst for justice that can’t be quenched.

“Being an attorney is hard for anyone, but I think criminal defense is unique in the sense that you really do have someone’s life in your hands,” says Leventhal. “Even if it’s a minor case, because something on your record can have a permanent impact.”

Leventhal’s criminal-law calling is fueled by traditional notions of fair play and substantial justice. He names Justice Ruth Bader Ginsburg, Justice Thurgood Marshall and Justice Louis Brandeis as role models for their courageous legal minds, for their fundamental fairness and for their standing up for people against abusive state action.

“What that means to me is standing up to government bullies that unfairly treat the people they are supposed to serve,” he says. “That’s what I am passionate about—standing up for people against government power. This sense of justice naturally led me to criminal law, a world where people are often railroaded with no one truly fighting for them. My mission is to make sure people have a real chance against Goliath.”

In the courtroom, Goliath can take many forms. One of them, he says, is the culture of the system.

“Unfortunately, the system still is in large measure based upon a culture of being tough on crime,” he says. “That’s not bad in and of itself, but with this culture infused in the system over several decades, it does tend to lead to unjust situations.”

Another Goliath is persuading the other key players in the courtroom to feel compassion, demonstrate care, keep open minds and, most critically, look beyond the police report. Leventhal says plenty of them do.

“Often, you have to climb a huge a mountain to get the prosecution and judges to see who the client is really is,” he says. “There’s a whole other story you don’t know about, and it’s my job to convey it.”
And when it doesn’t happen?

“I’m stonewalled,” he says. “Now we’re talking about standing up to a bully. But I love that role!”
It’s a role Leventhal honed as a public defender for seven years before launching his own practice in 2015. It was the job in the Los Angeles Public Defender’s Office that brought the San Diego native north to start his career. Leaving it to go out on his own was a change he says he felt both inside and outside the courtroom.

“As a public defender, you have the opportunity to form different bonds and relationships with the people in the court,” he says. “At least in that sense, you do get a little more of a warmer or better reception just by the notion of familiarity. As an attorney in private practice, if they’ve never seen you before, it can be difficult to get things done. My bonds in Los Angeles run deep, but things can become tricky in other regions.”

And there are other challenges.

“There is a psychology that goes with the client’s paying you directly,” he says. “The client has higher expectations and demands more personal attention.”

Leventhal says a large part of his job is making sure clients are fully informed and comfortable with the level of service. For this, he says, he goes above and beyond.

“I am also in a way a therapist and a social worker, and I try to do the full job so my clients 10 or 15 years from now look back and remember me,” he says, adding that this extra personal touch is often irrelevant to the outcome. “I know exactly what I need to do, and a lot of what you spend your time on does not increase the probability of getting a better result.”

What does get results he says, is having an intimate knowledge of the law.

“I am all about trying to know as much law as possible,” says Leventhal, a self-described hardcore technical legal guy and devotee of constitutional law, particularly substantive due process and equal-protection issues. “Law is power. It’s one of the great equalizers as a defense attorney.”

He says there are cases in which he would not have been able to achieve or manufacture positive results for his clients had he not taken the time to master the nuanced areas of the law.

“When you know the law and you’re citing the law off the top in court, that’s how you create power, leverage and a level of credibility,” he says. “When you do that in the court, you get people to listen, and you earn respect from the bench and the prosecution, especially after they consistently verify your legal accuracy.

“Now you’ve added passion and authenticity to your case, and that just ups the level even more.”
For all his successes now, Leventhal admits that in the early days of his career, finding another Goliath was as easy as looking in the mirror.

In addition to big-time acquittals and typical skirmishes, he says, he recalls being put on notice for contempt in his second jury trial ever, in 2009, for cross-examining a prosecutor who became a witness in the case because that prosecutor interviewed the complaining witness. He says was trying to elicit admissible hearsay, in particular a “prior consistent statement” under Evidence Code section 791.

“As you become experienced, you learn the value of ‘less is more,’” he laughs. “Get in. Get out. But as a super conscientious rookie, I had—like many new trial lawyers—a natural tendency to ask more questions than necessary. That’s what I did, to put it lightly. My form was not well-received by the Court. Rightfully so.”

Calling himself undoubtedly much less mature then as a man and as a lawyer than he is today, he says he’s appreciative of the wake-up call early in his career.

“That moment and others like it helped me over the years to slow the proceedings down and develop a heightened level awareness, which is a critical skill for an effective litigator,” he says. “I am grateful for that lesson—and also for my supervisor at the time, who came down from his office into the courtroom, plain clothes and all, to neutralize a very upset judge.”

And there’s another Goliath at which Leventhal has flung his stone, one that is universal to the legal field: the pressure, the solitude and the overall threat to mental health that nearly all attorneys experience. For that reason, he launched Attorneys Anonymous, an open-forum gathering that welcomes all lawyers. The L.A. County Bar Association’s Lawyer Support Program featured a few Attorneys Anonymous meetings in 2020.

Starting in July 2019 with a group of 20 in attendance, from all areas of law and in stages of their careers, the informal meetings over coffee or a meal (most recently held via Zoom due to COVID-19) give attorneys a space to be “carefree, authentic and vulnerable,” he says.

Leventhal helped set this authentic-vulnerable vibe by sharing his own personal struggles outside the courtroom with addiction and depression. In 2012, Leventhal checked himself into treatment for opioid dependence after battling lower back issues for 10 years. Part of Leventhal’s pain was physical, he says, but much of it was emotional and directly tied to his dedication to criminal law.

“I’m a warrior, and the extraneous aspect of my profession—the mental health aspect—was just another bully for me to take down,” he says. “My commitment to recovery and passion for justice has me flourishing today, but I fight every day to achieve personal and professional health.”

Leventhal is no stranger to bringing people together. His private Facebook group page Leventhal’s Litigator Network, which he created in 2016, counts more than 750 attorney-members who have joined for commerce, as well as “substantive and authentic discussions amongst litigators in the trenches.”
“I created the network fundamentally because I really wanted to connect to the legal community and create a safe zone for people to foster positive relationships and to ask questions and not feel like they’re going to be judged,” he says. “It’s total love, no pressure.”

The page includes discussions about legal issues, and it helps them get business, but he says the main focus is on helping people to be better attorneys. He also encourages the attorney members there blow off steam and joke around. And he discourages censorship.

“It’s all fun, authentic and it’s warm,” he says, “and that’s what I wanted to create.”

And who hasn’t needed some fun these days, with most of 2020 under the shadow of COVID-19 and social unrest? Leventhal admits it has heightened a persistent threat to his own mental wellbeing.
“As the years went by, I started to feel the toll that the job was taking,” he says, explaining that it was claiming control of his life. “I was more and more putting a premium on, ‘Yeah, I can smash this case. But is it worth it?’”

He says he has recognized that staying in a range of income, even if it’s less than what one is capable of producing, is much better for his life in the long run.

“I’ve had this discussion with other defense attorneys who go through what I do, and they’ve come to similar realizations since the pandemic,” he says. “Being able to do well from a business standpoint and improve your mental health is an interesting push-pull. But there’s no amount of money you can give somebody that is worth draining their mental health.”

Subscribing now to the business model of netting a little bit less over a longer period,