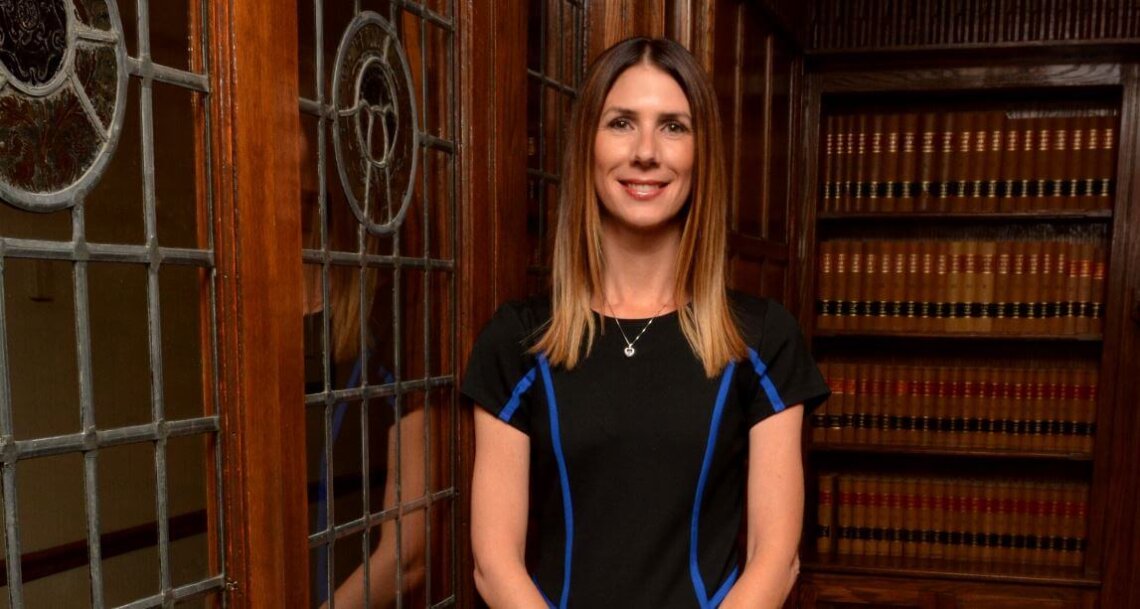 Anna Parise has experienced many transitions throughout her legal career. Beginning as an associate with a small boutique labor law firm in Cleveland to joining the largest law firm in Lake, Geauga and Ashtabula counties focusing solely in the family law arena. Each transition brought a new passion to light.

“For me, the family law practice came naturally” she says. “Despite the stressful and emotional demands placed on family law practitioners, I have found my place here. I genuinely want to help my clients.” Parise joined Dworken & Bernstein Co. L.P.A., in 2005 and made partner in 2015. For the past 11 years, she has helped her clients overcome the obstacles of divorce and other family law issues. And, now as a partner, Parise has the position to help effectuate change in the local legal community. “Giving back through volunteering and fundraising is something that requires a huge time commitment with no individual monetary gain, but I do it because that’s what’s important,” Parise says.

“If I could change one thing about the legal system, it would be time,” she continues. “In dealing with family law issues, clients oft en become frustrated and lose faith in the justice system because of how long the process takes. In Ohio, a common timeline for a divorce with children is 18 months – that leaves a couple or family displaced for a year and a half!”

While discussing clients and the pressures and stresses of the profession, Parise becomes emotional explaining a client she represented involving custody of a 4-yearold girl. Th e client, a server at Denny’s, was seeking custody of her coworker’s daughter. Both birth-parents were drug addicts and the client was more than happy to take her in, but wanted to do it legally correct. Both birth-parents were okay with the client-taking custody. However, the paternal grandmother was not and was seeking to fight for custody of her grandchild. Parise explains that in family law, there are people who become so desperate to gain an advantage in court at the expense of the child.

“Th e paternal grandmother decided to accuse the client’s husband of sexual abuse of her grandchild,” Parise says. “As a result, the girl was taken to the emergency room and administered a rape kit. It was incredibly heartbreaking to witness my client’s family be criminally accused and to put the child through something unnecessarily vulnerable.” Th e rape kit experience is oft en described by the victims as invasive, painful and humiliating – a repetition of the initial rape.

“Thankfully, the judicial officer found that there was no sexual abuse of any type and that the grandmother’s allegations were fabricated,” Parise continues. “She was denied visitation and has had no contact with the child since. Th e client won custody and has been able to provide a loving, safe and fulfilling life for the little girl. In fact, Parise recently spoke with her former client who confirmed the minor child’s growth, stability and happiness.”

Luckily for Parise’s client, she was able to afford the services of an accomplished attorney to advocate for her and the child. In many communities, however, there is a huge gap between individuals who can afford private counsel and those who cannot. However, some individuals who cannot afford private counsel are income eligible through Legal Aid. Unfortunately, with a high demand from those who are income eligible, Legal Aid oft en lacks the staff to service all clients.

As a result, in the fall of 2013, Parise was part of a team that developed a Pro-Se Divorce Clinic. It was founded by Judge Colleen A. Falkowski of the domestic relations division of the Lake County Court of Common Pleas who offered her courtroom for the legal services; Kari White and Ann Porath of the Legal Aid Society of Cleveland who hosted the event and pre-screened the applicants; Ann S. Bergen, Esq., former president of the Legal Aid Society of Cleveland, who created and simplified the forms completed by applicants; and Darya J. Klammer, Esq., a co-chair alongside Parise of the family law section of the Lake County Bar Association, who recruited volunteer attorneys to help with the program. Together, the team was able to develop a quarterly divorce clinic in Lake County, Ohio.

“It can be diffi cult to recruit attorneys to volunteer their time and services for the cause,” Parise explains. “So we came up with ideas thatcould provide incentives, which included free breakfast, free CLEs and networking opportunities.” Additionally, Judge Falkowski presents annual certifi cates of recognition to each attorney that successfully volunteers their time and service to the program.

Since its inception, the program has seen incredible success. Th ey have serviced over 100 individuals. Th e founders of the Lake County Pro Se Divorce Clinic have received an award for their volunteerism through Legal Aid. Th ey also presented at a National Conference in Austin, Texas, and locally in Columbus, Ohio, on creating similar clinics nation and statewide.

Parise has high hopes for the clinic and can envision other surrounding communities adopting a similar clinic to aid those in need.

“We hope that the clinic will gain regional and national reach and will have a huge impact on the legal system in the long run if it can gain that traction,” Parise says. “We’ve seen success in Lake County. We know it will take time, but we have to start somewhere.”