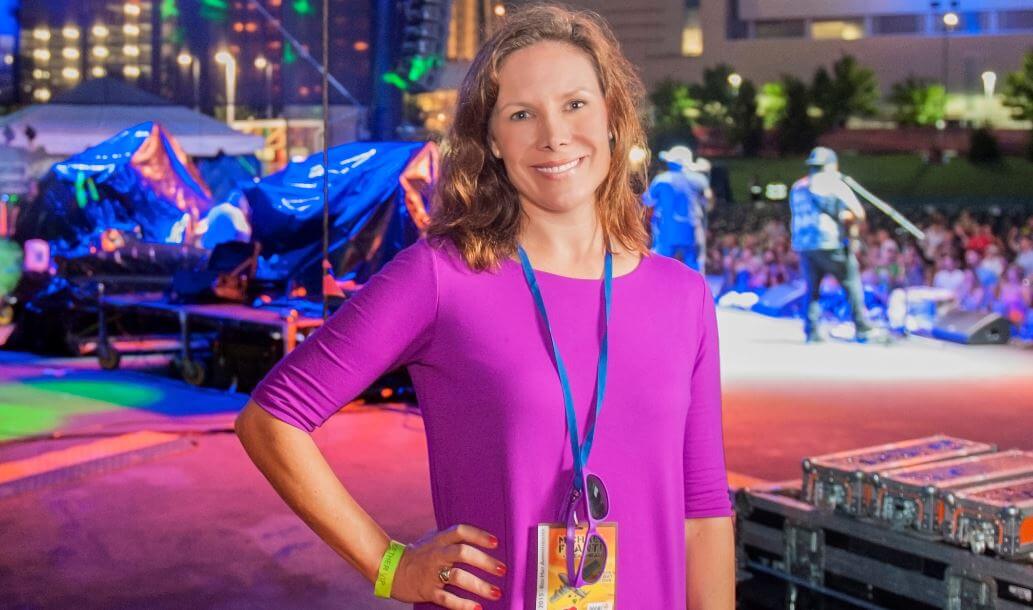 An hour later, as the stars poked through the clouds, the damp but upbeat crowd streamed back in for the rest of the Band Together concert. Raleigh business litigator Ashley Campbell welcomed back concert-goers with smiles, laughs and hugs as if she knew everyone, which she probably did.

The show was a fundraiser for StepUp Ministries; Campbell chairs its board of directors. Events like the concert have raised $2 million in the last year to fund the expansion of the program to other cities.

“StepUp is one of the greatest organizations I’ve ever been involved with,” said Campbell with great enthusiasm.

StepUp is an employment and life skills program for people who are homeless or have a criminal background and have not been able to find employment because of that background. The program helped 322 people find jobs in the last year. “The piece of the program I love is the life skills that people learn in order to transform their lives.”

Ashley Campbell has an engaging personality, frenetic energy, drive and a passion for everything she does. “My life is focused now on my family, work, StepUp, hiking and books,” she said.

Origins of “My Drive” StepUp is emblematic of the empathic thread that runs through Campbell’s life and winds its way back to her upbringing in Gastonia, North Carolina and to her mother, Wanda Beaty.

Wanda left an abusive home very early, got married and had two children. Then a divorce left her and her children alone with only Wanda’s income to support the family. “She worked two jobs because she had to and never missed work,” said Campbell proudly. “She had this incredible work ethic.”

Campbell and her brother, Spence, looked after each other when they got home from grade school every day. “We watched a lot of ‘Perry Mason,’” she laughed, quickly adding, “We are living proof that TV will not destroy your brain.”

When Wanda married Ken Beaty, a successful coach and teacher, Campbell came to regard him as her dad.

“My parents taught me to finish what I start,” she said. “A lot of my drive comes from my parents, but by the time I got to law school the drive was really mine.”

A self-described nerd, Campbell said her drive was evident at an early age. “Every year, I would compete in the library contest and I would read the most books every summer. I once got caught in math class reading a book tucked inside my math textbook so my parents grounded me by taking away all my books and my library card. I was devastated,” she laughed.

“My mom grew up in deep poverty. She taught us empathy for people who were poor. She taught us, ‘for whom much is given, much is expected’ and our obligation was to serve and help people,” Campbell said. While still in high school Ashley started volunteering at a home for people with AIDS and conducting AIDS education with her peers.

Dean v. Hill Campbell graduated from UNC with an undergraduate degree in American studies and a law degree from UNC School of Law. She then set her sights on a career in politics in Washington. But, unexpectedly, Campbell found herself drawn to a job with Legal Aid of North Carolina (LANC). “It appealed to me because it was a chance to provide legal representation to people in my hometown.”

In 2005, while a first year lawyer at LANC, Campbell successfully handled an appeal before the North Carolina Court of Appeals. That resulted in the Dean v. Hill opinion. “It’s my proudest achievement as a lawyer because it reaffirmed the rights of tenants to habitable housing,” she said. “That opinion is still cited by lawyers all over the state.”

Campbell showed me an award she received from LANC. “This plaque means more to me than anything else in this office,” she said. “Working there was one of the greatest experiences of my life, helping people living in poverty. Also, my time at LANC altered my career path because I found that I loved being in the courtroom.” Campbell joined Ragsdale Liggett in 2005 as a business litigator. It was a seven-year case with dozens of depositions and one million documents that first sparked her interest in professional malpractice and accounting litigation. She enjoys business litigation because “You’re dealing with rational actors who can make decisions about what is best for the business.” Campbell enjoys malpractice cases because she is challenged by the complex issues. She loves trying the “hard” cases.

“I was one of those girls they called bossy when I was a child,” laughed Campbell, adding that it is an attribute her clients appreciate. “I think that clients need to see that I have the confidence to lead them in the right direction. Litigation can be scary, even sophisticated business people still need my advice and help.”

Campbell’s practice also draws on what she learned as an American studies undergraduate about the founding of the nation, the Declaration of Independence and the Constitution. “It’s inspiring. Having an appreciation of history definitely gives you reverence for the law. Your first fidelity is to your clients but you have a greater obligation to uphold the law.”

“Litigation is just like politics,” said Campbell who lobbied for several years at the state level. “People become so wedded to their own views that they can’t compromise. At my first meeting with my clients, I always ask them, what are you trying to accomplish?”

What Campbell has accomplished at this stage in her law career is staggering: Best Lawyers in America, Rising Star, Movers and Shakers and recognized by Super Lawyers among others. The cover photo for this story was shot at the annual meeting of the prestigious Federation of Defense and Corporate Counsel. At only 37 years old, she was juried into their ranks last year based on her numerous successes in the courtroom.

At this year’s annual FDCC meeting in Banff, Canada, Ashley was invited to present to the full membership on issues relevant to the attorney-client privilege in the corporate context.

A Game Changer “This has been a real game changer for me,” said Campbell as she gazed at a photo prominently displayed on her bookshelf of her children, Caroline, 3, and Henry, 5. “Focusing on a family, not just work, changed the way I view success.” Her husband, college sweetheart, Russell, works at Fidelity Investments.

“My mother is my role model,” said Campbell. She and her husband now pass to their children a message similar to the one she received from her mother. “We try to teach them empathy for all people. I want them to always think about how their actions impact other people.”

“Lawyers are hard on themselves. We’re all so type A. Sometimes I think we just keep driving, driving, driving because that’s what we are used to. Making space and finding joy and slowing down is a challenge when you are so hard-charging,” said Campbell.

“I really like to be busy and like to work and love to be right in the middle of all kinds of exciting things. But it can wear me down so I have to ask myself, is this really fulfilling, is it bringing me joy or am I staying busy because I’m used to being busy?” said Campbell. “I have learned that I have to take breaks, it’s not good for me to keep the pedal to the metal.”

Campbell and I talked about what her life and long-term goals are. “I constantly struggle with that question. I used to think the goal was like a trophy for an accomplishment, something big at the end of your life. As I have matured, I have realized it’s more of finding contentment and joy in your work, joy in the everyday and it is important for me to continue to challenge myself and grow.”