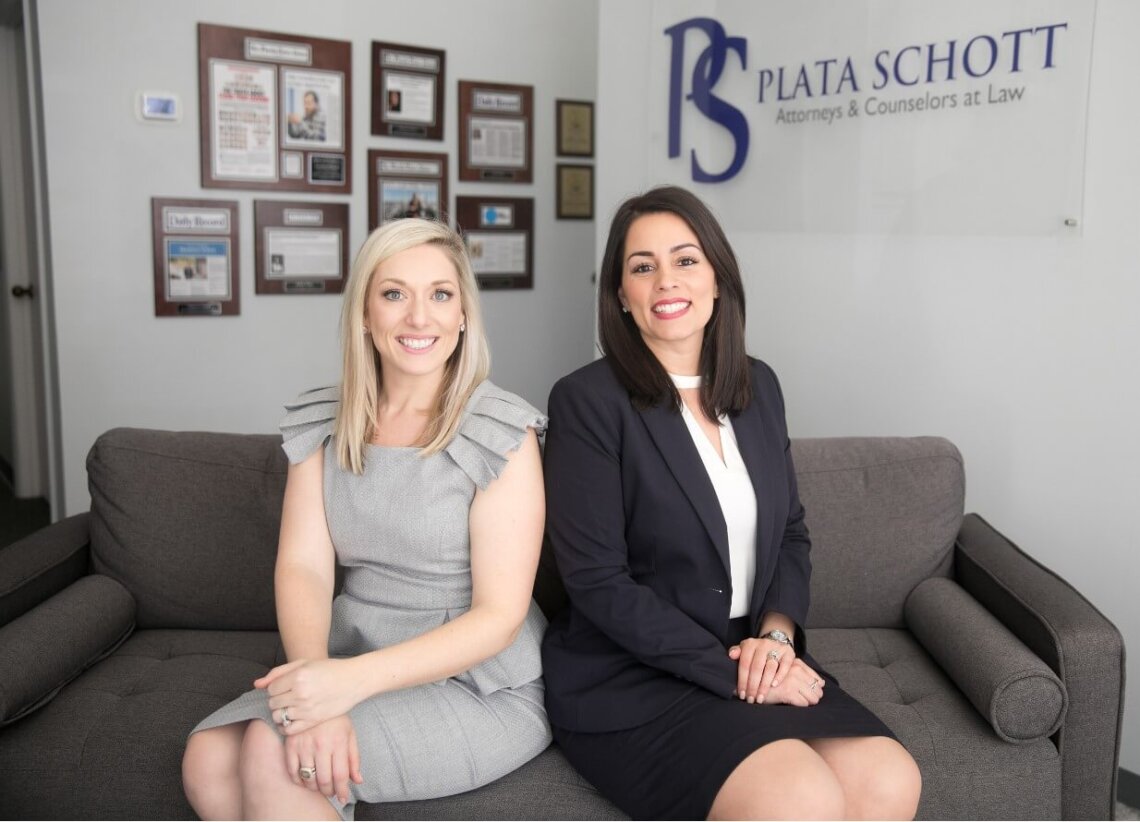 When Jacksonville attorneys Belkis Plata and Shannon Schott joined forces to open a law firm in 2014, they knew they had the experience and skills to provide formidable legal advocacy to juvenile defense, criminal defense and personal injury clients.

The two young women had formed a strong friendship while working together as trial lawyers at the Office of the Public Defender for Florida’s Fourth Judicial Circuit. Though they both loved the work, turmoil within the office convinced them it was time to move on. Instead of going to established law practices, the hardworking and ambitious attorneys recognized that their complementary personalities and combined legal expertise would make them a force to be reckoned with if they formed their own firm.

Five years later, after helping thousands of clients and trying numerous cases to verdict, they know their decision was the right one.

Plata, who is originally from the Bronx, New York, and Schott, a Jacksonville native, had crossed paths several times over the years prior to meeting again at the public defender’s office. As a high school senior in a work-study program, Plata worked part-time in Schott’s father’s chiropractic office.

“It’s kind of a funny story,” Schott says. “Even though we both worked for my dad, we never really met. Belkis was working in the office and I was outside pulling weeds.”

When Schott and Plata decided to go out on their own at the ages of 29 and 28 respectively, some people in their professional orbits told them that at their young ages, they weren’t ready to run their own firm. But the talented and determined partners knew that their law practice would be founded on smart business acumen and solid planning, not simply on taking a leap of faith that it would be successful.

Both women had grown up with parents who were business owners, so they were familiar with the challenges of being one’s own boss. Schott grew up watching her father run the aforementioned chiropractic office. Plata’s father owned a furniture upholstery business in which her mother worked as a seamstress. Her experience growing up in a family that worked very hard for everything they had instilled in her the importance of frugality. That early lesson has translated into the strong financial savvy that guides the firm today.

The duo started their firm with no loans and low overhead to minimize the financial risk. “Our first indicator of success came when we could pay our bills and pay ourselves small salaries,” Schott says. “We had a 1000 percent return on investment in the first year.”

The dynamic partners have continued to work hard through the years to grow their firm’s reputation in criminal defense, juvenile justice and personal injury practice areas. In 2017, Plata and Schott became part of the first class of board-certified attorneys in juvenile law. This certification recognizes their special knowledge and skills and demonstrates their dedication to helping young people stay out of the juvenile justice system. Schott currently sits on the juvenile law certification committee.

Earlier this year, Plata was sought out to join a team of attorneys representing an 11-year-old charged with manslaughter. Plata quickly realized she was the youngest lawyer on the team of experienced and distinguished attorneys. Plata, relying on her juvenile law experience, worked closely with the team to provide her unique insight. In the end, the team’s efforts led to the charges being dropped.

In their personal injury practice, they’ve collected seven figures for their clients in only the past two years. Through it all, their litigation prowess in fighting for clients arrested for misdemeanors and felony offenses ensured the firm’s doors stayed open.

Plata and Schott’s passion for defending people accused of crimes comes from their understanding that sometimes good people make bad choices. Schott herself knows how easy it can be to fall into the justice system because she was arrested as a teenager while filming a school project about Stalingrad. Armed with fake rifles, she and other students were on a construction site. A frightened neighbor, thinking the guns were real, called the police, who arrived with their real guns drawn. No one was harmed but the memory of that day has never left Schott.

“Fast forward 14 years later and kids carrying fake guns are getting shot by police,” she says. “It was very poignant to me. I will never forget having an officer pull a gun on me.”

CONTRIBUTING TO THE COMMUNITY

Both attorneys devote extensive time to legal pro bono work and volunteer activities. In 2014, the pair was recognized for their pro bono work on a Federal Clemency Project in Northeast Florida. Schott volunteers with Jacksonville Area Legal Aid (JALA), the March of Dimes and several other legal and philanthropic organizations.

Plata was recently selected to receive the 2020 Florida Bar Young Lawyers Division Pro Bono Award for the contributions she has made to those in need of legal services. Plata volunteers at JALA events, like their Ask-ALawyer and Name Change Project, she serves as a volunteer attorney ad litem to children in foster care, she provides pro bono assistance on complex juvenile cases such as the juvenile case mentioned earlier, along with many other selfless causes.

Plata also mentors and provides legal advice to juveniles through Take Stock in Children, a program that awards college scholarships to low-income students. Plata herself received a scholarship from the organization for her undergraduate education.

“Kids in the program will lose their scholarships if they are arrested,” she says. “I represent them for free to protect their scholarship. I might have had to give up on my dream to go to college without it because I didn’t have the resources. The program is amazing and provides all kinds of resources to kids.”

As passionate as they are about their legal practice, family comes first for both partners. Schott is married to attorney Michael Rainka and the couple have a three-year-old son named Henry. “I was 32 weeks pregnant when I went into preterm labor. Everything had been easy until then and suddenly my baby was hospitalized for 30 days. I think that period made me realize sometimes you just can’t be a lawyer. Your family needs you and you have to be present for them.”

Plata’s parents, sisters and extended family have always been her biggest cheerleaders in her journey to the law and starting her own practice. When she isn’t working, Plata enjoys spending time with them.

“I like to travel with my family,” she says. “For my 30th birthday and my mom’s 60th, I took her to Dubai, where she has always wanted to go.”

“Memories are all we will have one day. A month after Henry was born, my dad was diagnosed with cancer. A few days after we received the diagnosis, ten of us dropped everything and set out on one last trip with my dad.”

The partnership Belkis Plata and Shannon Schott enjoy has opened a lot of doors for both attorneys and they wouldn’t have it any other way. As the future unfolds, what do they hope for?

For Plata, it’s to continue participating in challenging cases in which she can help children both in juvenile court and those charged as adults. Plata recently defended a juvenile who was prosecuted as an adult for his first offense. Through her efforts, Plata persuaded the judge to give the young man an opportunity at life without a felony conviction or an adult record by sentencing him as a juvenile over the state’s objection.

“I hope that we continue to be leaders in the community, both on the social and civic side of it as well as in the courtroom,” Schott says. “I would love for us to join the million-dollar verdict club. I would love for us to continue to litigate cases and do trial work. I hope we can stay somewhat small and intimate as a firm and continue having great personal relationships with clients. We never want to exchange customer service for volume.”