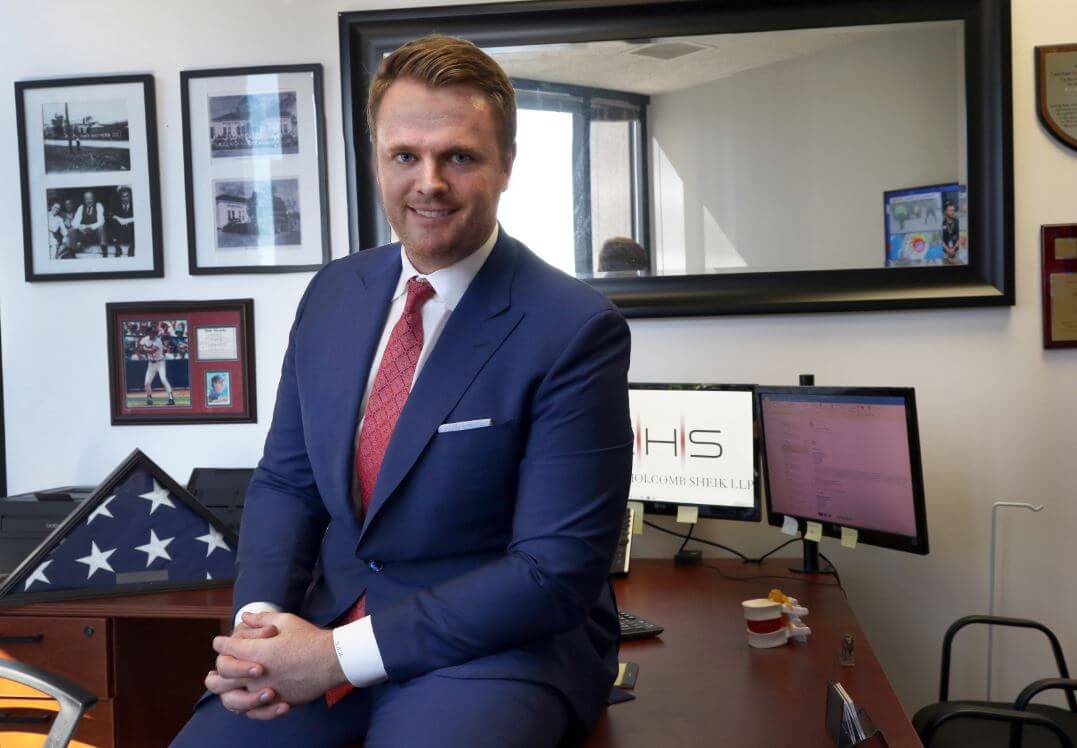 Parachuting behind enemy lines. Fighting the Nazis in their own soil. Taking a solo mission to destroy an enemy satellite in German territory. These were the first-hand accounts Dan Kramer, founding partner of Kramer Holcomb Sheik, heard from his grandfather, a World War II paratrooper. These experiences of battle prepared his grandfather for the North Carolina courtroom as a skilled trial lawyer, where he gathered even more stories, and the retelling of all of them instilled Kramer’s desire to fight to win.

“The way he was animated and told colorful anecdotes, being in trial almost sounded like a sport,” Kramer says. “Being on the field of battle, the competition, fighting for a client. Civility is number one, but you’re advocating. You’re fighting.”

As an athlete in a driven family, Kramer—who grew up until age 7 in Atlanta and then Los Gatos, California—first took his fight to the football field and basketball court, but Kramer was destined for a different type of warfare.

“Probably when I was about 12 or 13, sports dominated my whole life, but I realized I was not going to be a professional athlete so I needed a fallback plan,” he says, explaining that practicing law was the natural place for him to channel his competitive spirit. “I knew kind of young that’s what I wanted to do.”

Six weeks after his graduation from Southwestern Law School, where he studied to be a corporate transactional attorney, Kramer took a post at insurance-defense firm Gilbert Kelly, where the managing partner thought Kramer would do well in front of 12 citizens. Within his first 11 months of practicing law, Kramer was trying a case in front of a jury as first (and only) chair.

“I was absolutely hooked from there,” he says, adding he was fortunate to have good mentors at the firm. “Immediately after the verdict, I went from partner to partner at the firm offering to try any case I could get my hands on. I knew I had so much to learn and the best way to do it was actually getting in front of a jury.”

He ended up trying seven cases in three years, all as first chair. But as much as Kramer enjoyed the challenge, he says, there was something missing.

“I had set out in my career to fight in court for the underdog, but I didn’t feel I was doing that,” he says, explaining he was defending big corporations and insurance companies. “I asked myself, ‘Is this what I want to be doing?’”

So in 2012, Kramer made the decision to become a plaintiff attorney and started KHS with two friends from law school, which has now grown to nine attorneys. To enter this new front, he armed himself like he was going into battle—his weapon: knowledge.

“I had to immerse myself. I read every plaintiff’s book I could get my hands on. I was going to a seminar and conference twice a month,” says Kramer. “It was a great learning experience.”

The first case he earned hit close to home. A WWII veteran, whose life closely paralleled his grandfather’s, had been hit and killed by a grocery truck, leaving behind a loving widow, children and grandchildren.

Kramer says he left no stone unturned for the family he grew to care about deeply. With 17 depositions carried out, the case settled for multi millions for the family on the eve of the trial.

“It was tragic, but it was the right outcome for the wonderful family,” Kramer says. “It made me feel at that point that I’m on the right side of things.

“People go through the hardest times of their lives and we need to be there for them. My goal is to make it so that they don’t have to worry about anything, just mourn. I don’t want them to worry about how are they going to afford all this. That’s my job. I want them to focus on making themselves better and try to get their lives back. It’s so rewarding and the reason I got into this profession.”

The taste of victory and strong desire to get back into the courtroom prompted Kramer to sharpen his skills even further. He graduated from CAALA’s eight-week Plaintiff’s Trial Academy that refined his opening statements and allowed him to practice in front of legendary trial attorneys, and he attended the three-week Gerry Spence Trial Lawyers College, where he learned the fine art of storytelling. To this day, he reads books on winning trials multiple times through and he listens to tutorials in the car.

“I never want to stop learning,” he says. “We need to pick up as many different tips and practice pointers as we can. The more we do it, the better any trial lawyer will get.”

Kramer got his chance to get back in the courtroom on his next case in which a widow in her 50s was injured slipping on spilled coffee on the tile in the restroom at LAX. The injury left her permanently unable to work. LAX claimed it lost all of its construction work orders and that it had no cameras in the terminal to see who was carrying the coffee. With person after person offering no answers and LAX offering $0, the case was forced to go to trial, and Kramer was ready.

“After all the years of having done all this defense work and all of this studying, I finally had my crack at the plate,” says Kramer. The results: A $2.2 million judgment for the plaintiff and new code-compliant non-slip tile in the LAX restrooms to make all travelers safer.

More winning jury trials came along, including those for catastrophic injuries, wrongful death and even employment cases. Then one day a friend from law school called Kramer up about a case against a high-end jean manufacturer on behalf of a non-English-speaking worker who was fired because he got injured and couldn’t do his job. Kramer had to go up against a large Ivy-league law firm.

He won for him a nearly $2 million judgment with punitive damages plus attorneys fees, and the employer learned a valuable lesson: “You can’t fire people just because they’re hurt.”

The art of storytelling played an important part in Kramer’s career choice, and it is a key factor in representing clients now.

“You have to know your client’s story,” says Kramer. “Know them as people. Understand what they’ve had to go through. How it affects them. Why it affects them. We are their mouthpiece. We have to go in front of the jury and convey their story.”

This was especially true in a recent $2.8 million verdict for an electrician who was injured when he fell into a trench on a construction site, suffered 3 rib fractures and lacerations on his spleen. The man couldn’t work for six months, and nine months after the fall he looked normal and went back to work full time but was still in pain.

“He was suffering from the injury and he deserves a lifetime of compensation for it,” he says. “I needed to tell his story—that it was too painful for him to sit, to play with his kids, and that he was working through the pain.”

Kramer spent nearly 200 hours with his client and his family, including sharing many dinners together with his family, to understand the loss they were all experiencing. It’s a practice that works on all levels, he says.

“You get to know them, love them like family and treat them like family,” says Kramer. “There’s no trick. It’s just us caring for their story, and the jury sees it if we care.”

Kramer is not all about going to war. In 2017 he reached his goal to become one of the youngest attorneys to join the American Board of Trial Advocates, a prestigious national organization that aims to raise not only attorneys’ skill and expertise but also their levels of ethics and civility.

“It was a huge honor to be invited to join,” Kramer says. “I loved hearing all the stories about it from the trial attorneys at my old firm.”

ABOTA, he says, stresses the importance of being able to sit down with the opposing counsel to work things out.

“There’s so much we can achieve if we just pick up the phone,” Kramer says. “It doesn’t mean we don’t advocate. If you can give an extension give it, if you can do a favor, do it. Cut them a break. And if it’s not harming your case or client, by all means you should be doing it.

When it comes to activities outside the courtroom, Kramer has friends there, too. In 2021 he will take the post of president of the Los Angeles Trial Lawyer Charities, the organization made of trial attorneys that raises money for and physically goes out to help the city’s needy, including disadvantaged children, the homeless, women in abusive relationships, and disabled men, women and children. LATLC, which began in 2006, has raised nearly $5 million in the last 10 years and is working to expand its reach in San Diego.

“I love being a part of it,” Kramer says, adding that the board is comprised of wonderful people. “As trial lawyers, we can do so much for our clients and the community, too.”

In addition, Kramer co-founded the Beverly Hills Bar Association’s Person Injury section and speaks on panels about his craft. He continues to play sports and roots passionately for his alma mater the Colorado Buffaloes and the Atlanta Braves. Married in May 2018, he and his wife, Jennifer, share a passion for traveling and spent their honeymoon in Europe.

A self-described family man, who is as close to his wife’s family as he is to his own, Kramer holds a special reverence and love for his grandfather. Kramer not only keeps his grandfather’s burial flag next to him at his desk, he keeps his lessons of war and court close to his heart in his practice.

“Being in trial, you’re non-stop. You have to think on your feet,” Kramer says his grandfather taught him. “You can’t give up at any moment.”