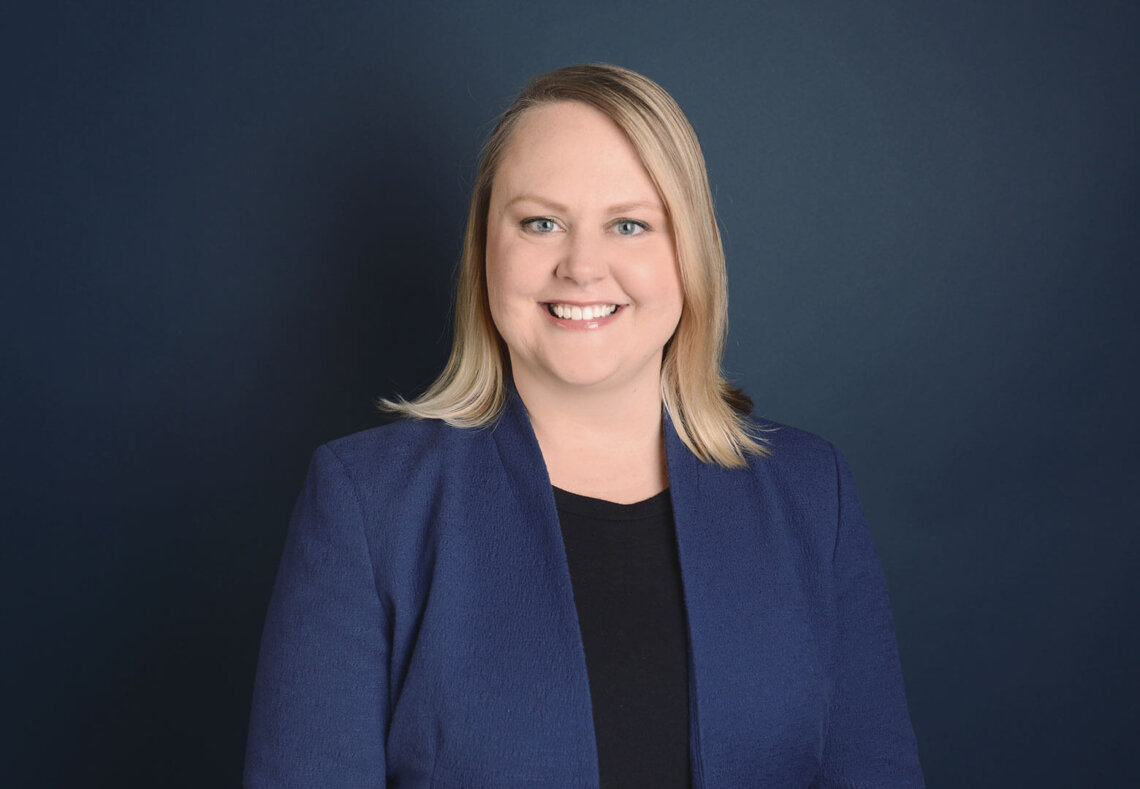 As a partner in the Mass Tort group at Robins Kaplan LLP, Holly Dolejsi is a champion of justice, most often on behalf of persons who have been harmed by medical devices or pharmaceuticals. Her practice demonstrates her abiding belief that all people, regardless of their social or economic status, should have access to the protections of the legal system.

Dolejsi grew up in Minnesota as the middle child of four. Always studious, she was accepted to Northwestern University, where she earned her bachelor’s degree in anthropology. After she had difficulties finding employment in her field, she secured a position as a temporary legal secretary at a local plaintiffs’ law firm. What began as a six-week gig turned into a career. She stayed on as a legal secretary for the next three years, attended law school at William Mitchell College of Law and returned as an associate attorney.

“I appreciated helping people in desperate situations, and the team aspect of legal work, especially litigation, really appealed to me,” Dolejsi, says. “Being in that environment helped me understand what it meant to be a lawyer in terms of the amount of work and the unpredictability of litigation.”

Dolejsi followed her mentor to Robins Kaplan, where there was an opening in the Mass Tort group. “He thought it would be the perfect fit for me, and he was right.”

Recently, Dolejsi’s focus has expanded beyond medical device and pharmaceutical cases. She is currently handling cases on behalf of dozens of Native American tribes for damages caused by the opioid epidemic.

“I represent 27 Native America tribes. They, along with other Native American tribes, cities, counties and states, have sued manufacturers for creating the epidemic in their communities. Working with the tribes is a new experience for me. We have an American Indian Law and Policy group in our firm, and Tara Sutton and I were brought on to help on the mass tort side. It’s been a great collaboration. I can’t even express how rewarding it’s been to represent the tribes, especially in this type of litigation that is so impactful. It makes me want to get up every day and fight.”

In a similar case, Dolejsi is representing the State of Minnesota against JUUL Labs, maker of vaping devices. “The State is bringing claims for creating the vaping epidemic in Minnesota. There are a lot of overlapping themes in these cases, and I see it as a positive development in my practice to be able to work on behalf of industries and entities with the power to make big social changes.”

Dolejsi says that Robins Kaplan’s formalized training programs and hands-on mentorship have contributed greatly to her growth as a professional. “All the senior partners in the department have given me great opportunities and gone to bat to make sure I’m in the room for important meetings. It’s clear that the partners really want our employees to get as many great experiences as they can.”

Since she became a partner herself, Dolejsi says she is embracing the opportunity to pay that mentorship forward.

“As a new partner, I’m being taught how to take on a more managerial role and mentor others who are junior. When something needs to be done, I think about if there is someone who needs to get the experience, and make sure they get it. I’m learning that each associate has such a different work style, and trying to appreciate where they’re coming from, not just saying that they need to do it my way. I also take some cues from them to see if there’s something I can learn.”

In 2018, Dolejsi was one of five attorneys named “Member of the Year” by the Minnesota Association for Justice for creating an annual conference for women trial lawyers in Minnesota. Now in its fourth year, the conference is bringing dozens of women together in an informal setting for quality programming and meaningful conversations.

“We really get to know one another and strengthen the network of women attorneys. It’s nice to be in a safe place where we can have an honest conversation about what obstacles women lawyers face.”

“This has been another incredibly rewarding experience. Access to the courts is something I’m really passionate about, and something I try to speak about even outside the legal field. All people should be aware that they have the right to seek legal assistance. My commitment is that everyone has access to justice.”