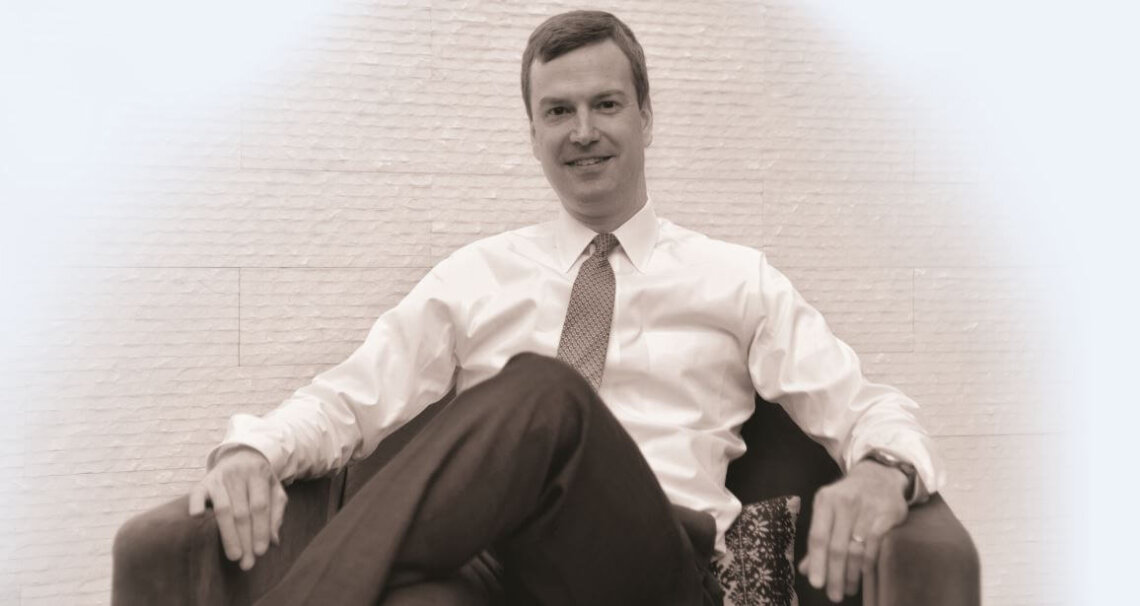 In 1878, a small town called Whittemore was mapped and parceled in northern Iowa.The 2010 census reported that only 504 people reside there today, but at the time of its founding, eager settlers purchased farmland in anticipation of the incoming railroad.

In 1895, just a few years aft er the town of Whittemore sprang into existence, the firm of Piper Jaffray was formed and headquartered in Minneapolis. It endures today as an institution trusted for its expertise in investment banking; equity and fixed income sales and trading; public finance; and asset management. It is these two places where our protagonist’s tale unfolds.

John Geelan’s grandfather had a choice – own a part of the family farm or go to college. He chose the latter, and aft er college he worked for his uncle in the general store in Whittemore. His grandfather eventually owned stock in Farmers State Bank, the local bank, and, in 1979, Geelan’s father moved his family back to Whittemore aft er purchasing a majority interest in the bank. From his father, Geelan learned lessons he would come to apply throughout his life – taking thoughtful risks for an uncertain but achievable return, managing that risk prudently, interacting with and managing people, and valuing the community and your family.

Geelan went off to college at the University of St. Thomas, knowing he had to come out of it with a business degree, but also finding a love of music and the classical guitar. “I didn’t start challenging myself until I started playing the classical guitar. The discipline of a musical instrument created a lot of drive that carried over into economics and eventually law school.” He earned his bachelor’s degree with a double major in economics and music, and went on to earn his law degree from the University of Notre Dame School of Law.

For the first four years of his career, Geelan worked in the corporate finance group at what is now Faegre Baker Daniels LLP. “I learned an incredible amount from very intelligent, hard-working attorneys who highly valued meritocracy and doing the right thing. I also developed many life-long friendships, but my instincts told me that the right in-house position would speed my development.”

At only 37 years old, Geelan was placed at the legal helm of the company, an NYSE-listed public company with a large broker-dealer operating subsidiary. He says the journey that brought him there was “part self-discovery and part pure luck. In the olden days, lawyers who went in-house were thought of as those who couldn’t get a job at a law firm. But I chose this. When I left the firm, I had a lot of fear that I had made a mistake and had given up on being a partner, something that had been a goal since law school. But I found myself doing really interesting work, and I got to be a part of opportunities I never would have experienced anywhere else.”

Geelan admits that stepping into such big shoes was daunting at first. He had the wisdom to ask the company for a leadership coach, a move he says bolstered his confidence and helped him to lead his team more effectively. One of the great lessons he learned from executive coach Tom Goodell of Linden Leadership is to embrace fear. “He told me to accept some fear, and then take a chance and act anyway. It changed what I thought about myself and the way I think about decision-making and risk.”

As a new GC, Geelan was also formulating who he wanted to be as a leader and how he wanted to direct his team. “Tom also imparted a philosophy about getting more out of people by instilling in them a sense of wanting to excel themselves – not a top-down mandate from management. He showed me a TED Talk on the power of vulnerability. It helped me appreciate that if I wanted to have a dynamic group of lawyers and other people working with them, I needed to lead with values they could believe in. We strive for the attributes of hard work, courage, doing the right thing, transparency and a sense of humor. These are the qualities that promote a healthy work environment and bring people together even when there is conflict.”

Geelan brings a well-rounded legal perspective to the boardroom that is enhanced by his former experience working for a private firm. “Being at a law firm I learned the value of hard work and client service, and at the company I have worked to become a thoughtful leader in the midst of multiple viewpoints. I need to have my own view of potential outcomes, know the objectives of the CEO, understand the viewpoint of the board, and work within that framework to achieve the best outcome for the company. I’ve also learned the importance of a culture of ethics, a key factor in mitigating losses. And loss prevention is reputation preservation. We must consider our reputation in the financial services industry, with so many recent negative headlines about the industry and Wall Street.”

Geelan also believes in making a call. “I think it’s important to have an opinion. I might not be right at all times, but I believe it is incumbent upon me to offer a position. I have to say, ‘Here’s the analysis. Here’s what I think we should do.” There also has to be room for a direct report and others to disagree. Within that framework, if everyone is working within the same set of assumptions, I believe you are able to reach the correct outcome. True strategy partners are giving advice about what to do even if it’s uncomfortable.”

Due to his experience in private practice, Geelan also understands what it’s like to be outside counsel. “I didn’t really know this going in, but it is a very complex relationship. Outside lawyers have viewpoints about outcomes, your abilities as an attorney, and conversely, you have your opinions and beliefs about their service level and motivations. You have an insider’s perspective, and they may understand external factors better. Given this dynamic, we mostly pick lawyers based on individual relationships rather than the law firm, but there are exceptions. I’ve found that it’s important to have established relationships because people understand you better once they’ve spent some time with you. But I’ve also come to appreciate the importance of meeting new people and law firms and forming new relationships.”

Geelan talked about some of the things he looks for in outside counsel. One is the opportunity to explore alternative billing arrangements. “We understand that pricing can get better if we send more work to a firm, but there’s still not enough discussion on the billing front overall. We’d like to see more transparency. Are they partnering internally to ensure efficiency and value? Are the right people getting credit? If a managing partner said, ‘I think on this deal it would be better for you to do an alternative billing arrangement,’ we’d definitely want to take a look.”

Diversity is another thing that can enhance the appeal of an outside legal team. Among Geelan’s own eight direct reports, five are women. Of these, four are managing directors. “It’s been a great opportunity and privilege to work with the women in my group. I have learned a lot, and continue to learn a lot from my partners. I think we need more women and diverse partners because people from different backgrounds bring new perspectives. And it helps us to approach challenges with more relatability because it reflects the world we live in.”

From a small town in Iowa, John Geelan set out on a path of self-discovery. Rather than taking the well-worn track, he trailed his instincts and passions to become general counsel of Piper Jaffray. “I’m passionate about the financial services industry, and I see the importance of engaging with and understanding the business and company I am advising. I think as professionals, we are best-served through a process of self-discovery and matching up with the right professional opportunity. The closer we get to that zone, the happier and more successful we can be.”