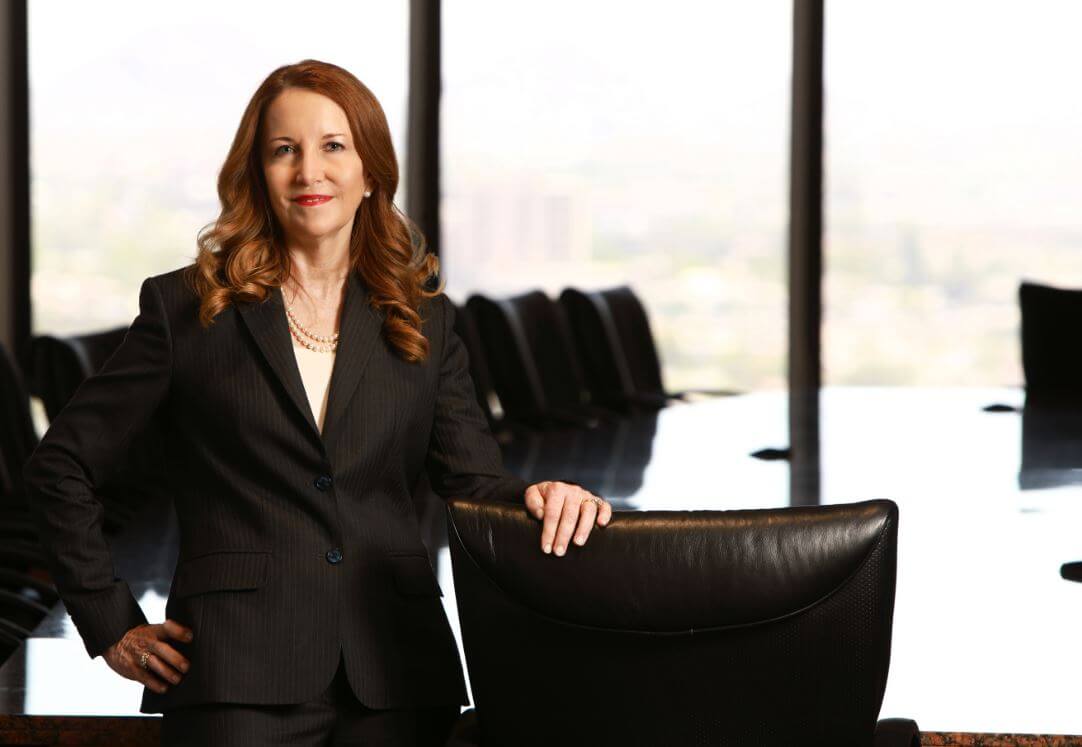 Attorney Joyce Wright is a certified real estate law specialist who is a partner and longtime practice group leader of the real estate group of Snell & Wilmer. Her commitment to integrity and ethics shines through in every aspect of her work and in her interest in mentoring those in the up-and-coming legal community.

An Arizona native, Wright’s interest in law was born of the educational example and work ethic of her parents. “My family was very academically focused,” Wright says.

Although her mother set aside plans for medical school when she was married and became a mother, Wright was inspired as her mother returned to college shortly after having twins. Her younger sister became an MD and brother received a Ph.D.

She became interested in law in high school when taking government and economic classes. “I was very interested in topics related to constitutional law,” Wright says. While earning her Bachelor of Arts at the University of Arizona, she did an internship at the Pima County Public Defender’s Office where she got to know some of the lawyers. At times, she was sent out to do a variety of interesting tasks such as interviewing inmates at the jail, while further honing her interest in law. While in her college sorority, Kappa Alpha Theta, she re-wrote its bylaws with the assistance of an alumna who was a lawyer.

GETTING INSPIRED AND GETTING STARTED

In law school, Wright wasn’t entirely sure of her potential area of practice, but a summer clerkship at a firm that specialized in mining law helped to further her interest in transactional law. Her second year, she clerked for Schimmel, Hill, Bishop & Gruender, where she was befriended by attorney and now federal judge on senior status with the United States District Court for the District of Arizona, Susan R. Bolton. Bolton had clerked for Judge Laurance T. Wren, and suggested Wright to the judge which led to him hiring her as a law clerk.

“Things just fell into place,” says Wright. “I feel fortunate that I had such capable people take an interest in me.”

It was Judge Wren who knew Thomas Reilly on the executive committee at Snell & Wilmer and suggested the firm interview Wright. Wright recalls Judge Wren receiving a call from Reilly who inquired about young law clerks who might be a good fit for the firm.

“Judge Wren told me I’d be a fool not to take whatever job they offered because it’s a great firm,” says Wright.

She was offered a position in the real estate group where she initially worked on both real estate litigation and transactional matters. Wright has now been with the firm 36 years. As a young associate, she had the chance to work on major real estate development projects throughout the Southwest with seasoned real estate partners at the firm. Her earliest years of receiving mentorship from senior lawyers have not been forgotten and she continues to pay it forward to the next generation.

Wright now practices in all areas of real estate. A significant portion of her practice involves being outside counsel to a REIT firm that owns a large portfolio of hotels throughout the United States.

“The firm is committed to hiring people who have academic talent and integrity,” Wright says. “We look for people who will be good team players because we handle so many complex projects that require numerous law specialties. You’re not just working as a solo person and, on many of the projects, there is a team of people with different disciplines.

“It’s fabulous that we have, in most cases, somebody in our firm that has the expertise to bring to bear on the projects I have for my clients,” she continues. “That’s been good for my ability to attract and support many large companies as well as a variety of individual clients and small businesses with real estate needs.”

IN SERVICE TO OTHERS

There are many young staff members working with Wright handling everything from corporate work, finance transactions, licensing and entitlement matters, due diligence and more, and she revels in their successes. She points to the younger lawyers and notes that they are valuable team members. “I work with the young people in my department on virtually every project I have,” Wright says. “I enjoy watching them grow up and become partners at the firm, or even leave the firm and go off and work for our clients. It’s very satisfying to be part of their development.”

She also serves as a specially appointed mentor to younger lawyers in her group. “That means more than giving them work,” Wright says. “It means being helpful to ensure that they have a successful career, ensuring that they get the right training, become integrated in the firm and helping them navigate issues like maternity or paternity leave.”

Until recently, Wright served on the board of directors and on the executive committee for many years for Homeward Bound, an Arizona based nonprofit that serves various needs of families going through homelessness. She’ll continue to be a strong supporter of the organization that was initially founded by Snell & Wilmer.

Wright has been married to her husband, Paul, for 39 years and they have four grown children. She is involved in all things related to her immediate and extended family and in her time away from the office, she enjoys cooking, quilting and yoga and spin classes.

As she continues to embrace her work at Snell & Wilmer, she looks forward to more years working in a career she loves.

“I like the challenge of working on transactions that will create something lasting and in the real estate development field, that’s what’s happening. In addition to being part of what is being physically developed, I enjoy the lasting relationships created with my clients along the way,” Wright finishes.