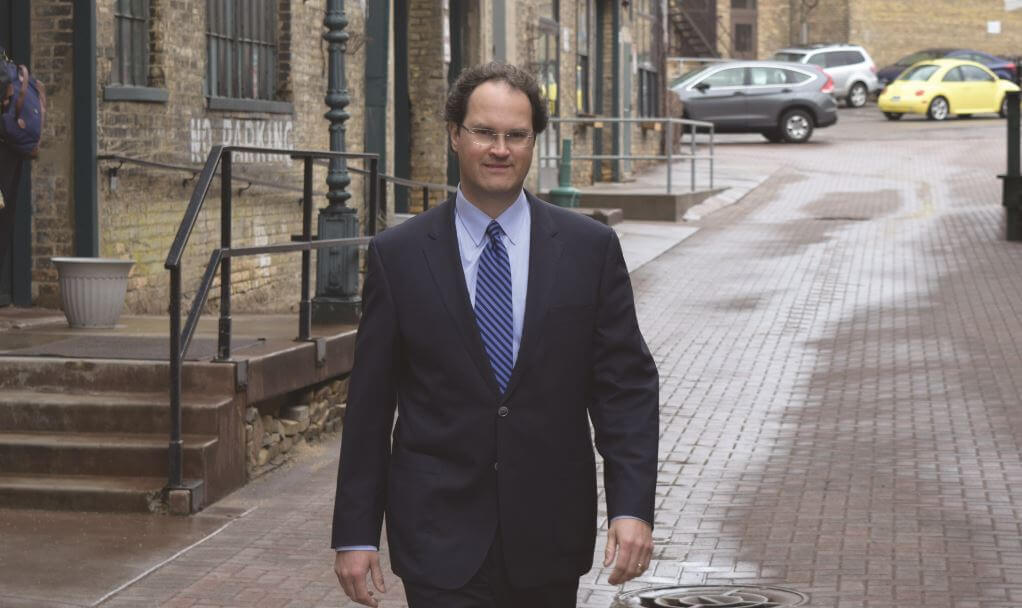 Patrick Burns embodies the essential characteristics of an attorney, arbitrator and mediator of the next generation. He is an entrepreneur, an innovator and a master of his trade.

Burns is one of only four mediators in Minnesota to be certified by the International Mediation Institute and is a member of the National Academy of Distinguished Neutrals. He recently earned an LL.M. in dispute resolution from the Pepperdine School of Law Straus Institute for Dispute Resolution. He also serves as a mediator and arbitrator for the American Arbitration Association (AAA) and the International Centre for Dispute Resolution (ICDR). He is a recognized authority in his field and regularly teaches the art of ADR to his peers through continuing legal education programs and to law students at the University of South Dakota School of Law.

Burns grew up in Sioux Falls, South Dakota, where his father was a trial lawyer and his mother was a teacher. After completing three degrees at the University of South Dakota, Burns took the unusual step of serving as an active duty officer and lawyer in the Army JAG Corps. Not many lawyers can say they have been paid to jump out of airplanes. “I went into the JAG Corps because I wanted to serve my country. My grandfather fought as a paratrooper in World War II and earned a Silver Star. I also chose it because I wanted trial experience, and I got that in spades. I defended soldiers charged with crimes and tried cases in Alaska and all over the West Coast for three years.”

Following his military service, Burns and his wife returned to the Midwest and settled in Minneapolis. Burns went to work for a litigation firm and then spent three years as vice president of the Minneapolis office of the American Arbitration Association. He later returned to law practice and was a partner at two large Minneapolis firms. Today, he is a solo practitioner licensed in Minnesota, Wisconsin and South Dakota. His dynamic practice includes personal injury, class actions, outside general counsel services and ADR.

Burns’ versatility and humanity make him exceptional at his craft. “I feel like I have a 360-degree view of the law. I’ve worked on both sides of the fence, working for defense firms where I primarily represented businesses and insurance companies, and I’ve also represented consumers and individuals. As a result, I feel like I really understand people – the lawyers and parties – in a dispute. I can process information quickly and find areas of commonality to build upon and resolve a matter. It’s not always about the money; sometimes a simple apology or creative solution can get a case done.”

Burns’ parents instilled in him a genuine desire to help others. “I couldn’t imagine ever being in a profession where I didn’t help people,” Burns said. “I saw that in my dad. He helped injured people, sometimes taking on causes to his own emotional and financial detriment. It was inspiring to me to grow up seeing lawyers as advocates for people.”

Burns has channeled his considerable legal skills and passion for dispute resolution to create a thriving and innovative practice in ADR. His philosophy is summed up in the words of Abraham Lincoln, “Discourage litigation. Persuade your neighbors to compromise whenever you can. As a peacemaker the lawyer has superior opportunity of being a good man. There will still be business enough.”

Burns strives to be that “good man.” His efforts have not gone unnoticed. In 2015, he was honored by Minnesota Lawyer magazine as a Lawyer of the Year for his pro bono work assisting a Vietnam War combat veteran with his claim for PTSD benefits.

In the course of his ADR practice, Burns identified an underserved segment of the population. “I noticed a big gap in the market for reasonably priced ADR services. There are a lot of attorneys doing pro bono ADR and a lot who are charging $500 an hour for services. But there are so many cases where an affordable option is needed.”

This reality prompted Burns to form ValueSolve ADR, a flat fee model that is efficient, effective and affordable. Minnesota Lawyer magazine honored ValueSolve ADR as a Legal Innovator in 2011. Burns has assembled an impressive panel of top attorneys across an array of disciplines who are also at the leading edge of ADR in Minnesota. The ValueSolve panel includes David Allgeyer, Joseph Daly, Linda Mealey- Lohmann and Michael Tewksbury.

ValueSolve ADR administers Hennepin County’s Fourth Judicial District Flat Fee Mediation Program. “We are lightening the court’s caseload and workload by resolving the majority of the cases they send us. We’ve handled more than 100 cases for them in the last five years with a settlement rate over 80 percent.”

Burns is currently assisting the city of St. Paul in developing a new employment mediation program and was recently hired by the Metropolitan Airports Commission to resolve an internal executive-level employee dispute. These opportunities came about because of his consulting and mediation work with the city of Minneapolis Department of Civil Rights.

According to Burns, it is an “exciting time to be in the law and be a solo practitioner. It requires being very versatile. I especially enjoy facilitating resolution through ADR. To me, mediation is more than just effectuating a settlement; it’s an art that requires listening to and reading people. I put forth the same effort in a small case as in a large one. I enjoy working with all kinds of people and find real satisfaction in helping to negotiate a dispute in a way that leaves the parties feeling like they have had a voice in their resolution.”