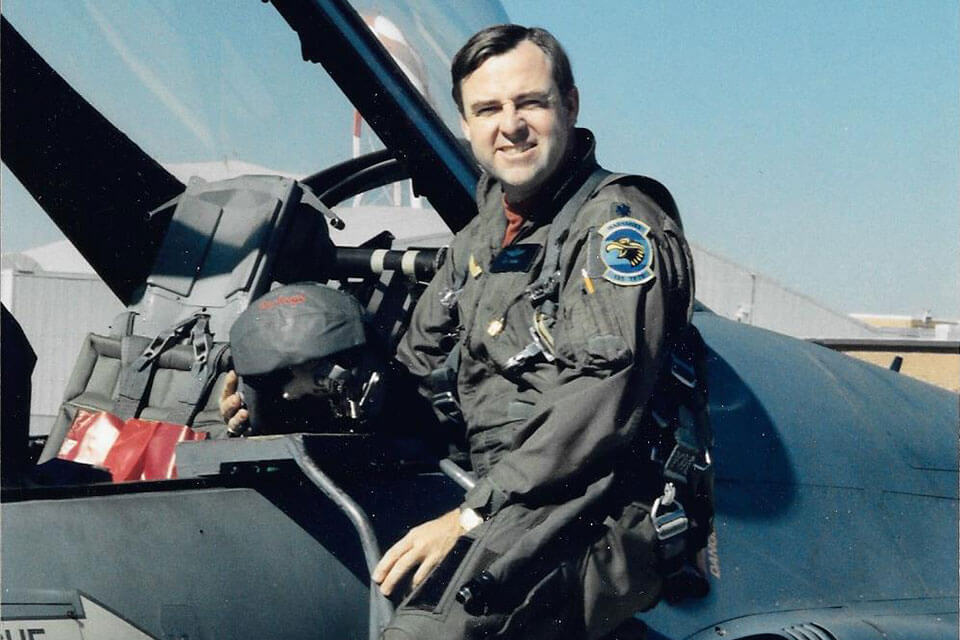 Peter Collins Jr. always wanted to fly jet fighter aircraft; the faster, the better. When he was young, Collins’ uncle, an Army Air Corp accountant, sent him photos and brochures from aircraft manufacturers, and he was fascinated by the afterburning power of these fabulous machines. Finally, by fate, Collins got his chance.

Collins was drafted in 1969 after graduating from Georgetown University in Washington, DC. He elected to go to the Air Force and completed undergraduate pilot training at Laughlin Air Force Base in Del Rio Texas a year later.

He qualified for jet fighters in pilot training and was assigned to the greatest manual jet fighter in the inventory – the F-100 Super Sabre. The F-100 was the first aircraft to go supersonic in level flight. At Luke AFB in Phoenix, Collins graduated in the last USAF F-100 training class. The F-100 was tricky and might blow up on occasion, but it was a marvelous combination of guts, power, and speed. It stank of oil and grease, exactly the way Collins had hoped it would.

In his book The Right Stuff, Tom Wolfe wrote about having 20,000 pounds of thrust in your left hand and 7.33 G’s in your right hand, a testosterone-boosting combination, which could not be beaten in any other arena in the world. Collins added, “Tom Wolfe incredulously got it completely correct when he wrote The Right Stuff. It felt like riding a bucking bronco at times, but like a magic carpet when you stroked the burner at 400 knots, and suddenly found yourself at 550 knots!”

Then came reality – again – when Collins’ entire class was sent to become Forward Air Controller Pilots (FACs) in Southeast Asia (SEA) as President Nixon prepared to order a massive air campaign. Collins was assigned to fly a small propeller spotter plane in Vietnam. He arrived just in time for another rush, but of an entirely different sort. Collins was front and center for the second Tet Offensive, also called the Spring Offensive of 1972.

The North Vietnamese attacked Saigon with a frontal assault of 300,000 men, 700 Soviet tanks, thousands of anti-aircraft guns and – worse yet – the first combat use of heat-seeking antiaircraft missiles. The missiles were lethal to small propeller aircraft and helicopters, and they changed the USAF’s entire approach.

The second Tet Offensive was stopped at An Loc, a small town some 50 miles north of Saigon. U.S. ground combat units were largely withdrawn, and Collins was one of the primary airborne “King” Facs in the battle of An Loc. He directed approximately 1,500 airstrikes. “Based on great flying, lots of support, and abundant good luck, we stopped that offensive,” said Collins.

Thousands of men and dozens of allied aircraftwere lost. “I saw three aircraft shot from the sky before my eyes, but it worked,” recalled Collins. American airpower and South Vietnamese Rangers won the second Tet Offensive. The North lost every tank and anti-aircraft gun, along with most of its men. Collins dispatched over 50 Russian tanks in airstrikes. He completed his tour with 260 combat sorties and 896.5 combat hours. He was awarded the Distinguished Flying Cross with two Oak Leaf Clusters.

Although he won a number of awards and decorations for his service, Collins will tell you that “the best one was from the 21st Division, Vietnamese Army at Lai Khe, sometime around July 1972. It’s the top of a ration can, with a ‘ribbon’ of sorts on top, and Sharpie marks, thanking me and three other FACs for what we did at An Loc.”

When the Vietnam cease-fire occurred, Collins and his fellow servicemen came home to a disapproving public. Collins let his hair grow and attended Ohio State University College of Law while assigned to the 166th Tactical Fighter Squadron at Lockbourne/Rickenbacker Air National Guard Base.

While at Rickenbacker, he again flew the F-100 “Hun.” Collins considers his F-100 experience and his association with the 166th Tactical Fighter Squadron among the high points of his life.

Collins got an internship at the Franklin County Prosecutor’s Office, where he tried over 60 felony jury trials in just two-plus years. Good fortune hit Collins again; he met Deborah Munger, a brilliant teacher in Columbus, and they married. Today, they have two great kids and four great grandkids.

Collins needed to make a living, not just a career, so he went into private practice and learned the art of civil litigation. As time went on, Collins tried more and more civil lawsuits to verdict.

Fortune struck again for Collins. After he graduated from USAF Fighter Weapons Instructor School in 1987, he became the Night Attack Manager for Air National Guard at the Air Guard Reserve Test Center in Tucson. During this commission, Collins was a primary force in the development of night vision goggles, integrated night helmets, and infrared equipment for low altitude night attack in single-seat fighters.

Collins completed his 21-year flying career with over 4,000 hours of flight time as Pilot in Command, and a final checkout in the F-16 “Viper” jet.

He returned to the law at Slutes Sakrison, a civil trial law firm. There, he tried 11 jury trials in three years, and dozens of arbitrations. Collins learned the skills required to be a successful civil litigator and trial lawyer. He also learned the appropriate and civil way to practice law as a professional.

Three years later, Collins joined Gust Rosenfeld P.L.C. and has been in the Tucson office since 1993.

“It has been a great ride at Gust. Supported by superior lawyers and staff, I work interactively with over 60 outstanding lawyers in every aspect of the law. We have a terrific mix of young and experienced lawyers, and we produce great results for quality clients every day, year in and year out,” said Collins.

He serves on the diversity committee at Gust, and recently wrote an article detailing the history of the Tuskegee Airmen.

Collins serves as a judge pro tem for the Arizona Superior Court. He has been recognized for insurance law and personal injury litigation in The Best Lawyers in America each year since 2009 and for Insurance Coverage in Southwest Super Lawyers. Collins was also recognized in Top Lawyers 2010, Corporate Counsel Magazine, and is AV Preeminent rated by Martindale Hubbell, representing the highest rating in legal ability and ethical standards.

Collins was once asked about the difference between trying a civil lawsuit to verdict and flying a jet fighter. He said “There is no difference. Both involve hours and hours of boredom and preparation, interspersed with seconds of sheer terror!”