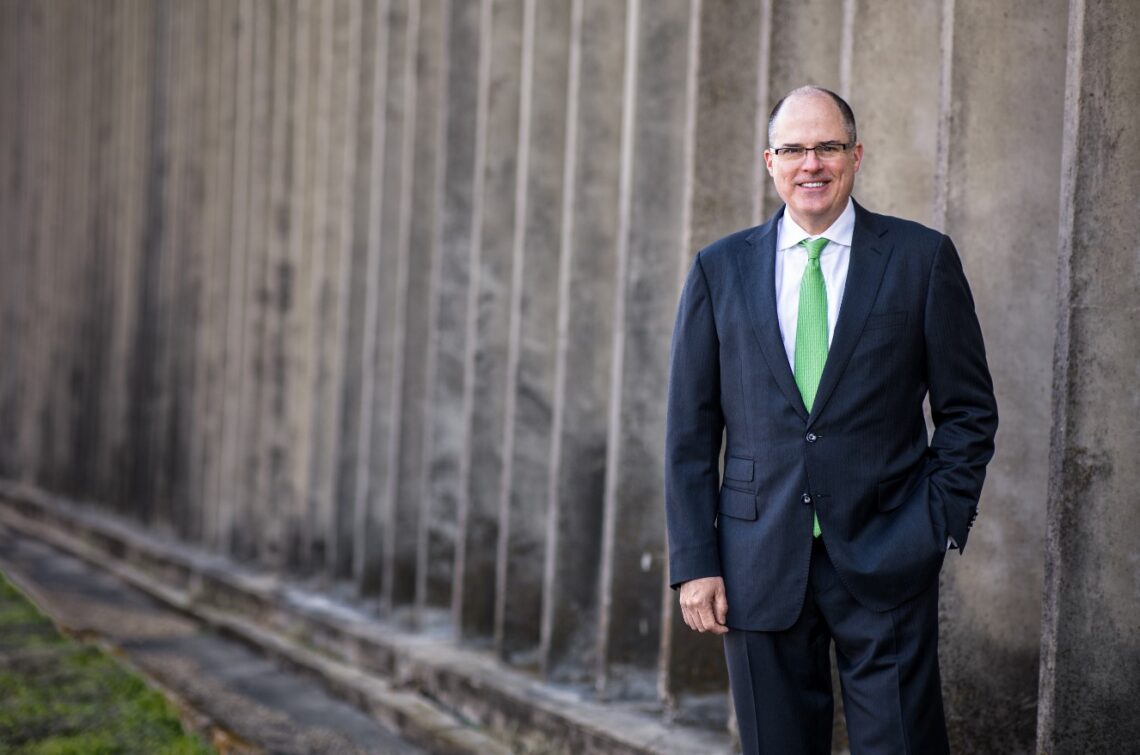 “Long distance and extreme cycling take planning, conditioning, discipline and focus – just like litigation. Especially litigation that involves people’s lives. Whether cycling up the world-famous route on Mt. Lemmon in Arizona or participating in the grueling 125-mile Triple By-Pass in Colorado, each event requires the same disciplines as those needed in court defending your client,” says Phillip Linder, founder of The Linder Firm.

His commitment to his clients and his law practice is on a par with his commitment to cycling. Linder rides 3000-4000 miles a year to prepare for the handful of events he participates in each season. As with his trial practice, he can spend months preparing for a single jury trial. He is in it for the long-haul.

“The events that I train for and participate in are generally rides that involve some element of environmental challenge, such as long distance (100 miles or more), or high elevation.”

He travels around the country a few times a year to participate in these bucket list rides, trips that have included routes in Maine, Napa, Arizona, Colorado, Lake Tahoe and Big Bend, Texas. 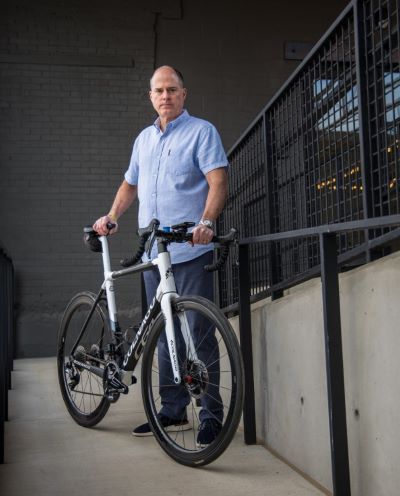 Growing up in Dallas, Linder was always infatuated with bicycles and motorcycles, and he got started riding at the early age of 6 or 7.

“Like any kid, I loved the freedom of being on two wheels. I felt like I could go anywhere. I couldn’t own a street bike then because I was too young to have a driver’s license, so I rode dirt bikes and motocross. When I went to college, I started riding motorcycles, and then after I got out of law school, I bought the first of four I would own.”

His serious motorcycling began after graduating from Baylor Law School but ended in a near-fatal motorcycle accident in 2001.

Even though he and his wife, Stephanie, had left their wedding reception in 1999 on his black and white Harley Davidson Road King Classic, she sold the motorcycle while he was in the hospital. “When she told me what she had gone through, I promised I wouldn’t ride motorcycles anymore. However, I continued cycling and eventually it became an important discipline in my life.”

A Calling to the Law

Linder is entering the 30th year of his law practice and his experience gives his firm and his clients an enviable edge, especially in litigation. During law school at Baylor University, he clerked for two large downtown firms specializing in civil litigation. However, he quickly realized that young lawyers in that situation have to wait years to see the inside of a courtroom. After talking with his father, who was involved in the federal criminal justice system in Dallas, and a few other lawyers who had mentored him, he decided to join the Dallas County District Attorney’s Office in 1992. He stayed there almost four years, trying nearly 100 jury trials to verdict – from DWIs to capital murder.

Linder credits early influences in his life as major contributing factors to his legal career and his success in criminal defense and family law. His father had been a career federal agent for the Treasury Department, who after having worked a few years in New York City in the ’70s, spent the rest of his career in Dallas, Texas. He became friends with many of the local criminal justice lawyers. This exposed Linder to those lawyers who eventually became his mentors in the law. They were legendary criminal defense lawyers such as Jim Rolfe and Robert “Bob” Hinton and the late George Milner Jr. and respected District Judge Merrill Hartman.

Linder says there was no particular “aha” moment. Instead, due to his exposure to his dad and his lawyer friends, was called to the law at a young age.

With dual business degrees from Baylor University, Linder originally thought to pursue civil litigation, but there was always this pull in another direction.

“That is why I eventually joined the District Attorney’s Office,” he says. “I enjoyed being an assistant district attorney in Dallas. We got to try all kinds of cases, and we were in court almost every day. However, over time, I began to feel for many of the defendants. Often, they were backed into taking a plea deal simply because they lacked the money or ability to defend themselves. I learned that no matter how intelligent or wealthy a defendant may be, in criminal court he is still fighting against all the manpower and resources of the state or federal government. The defendant is literally the underdog in any criminal proceeding because the government always has a big head start.”

Linder left the Dallas County District Attorney’s Office in 1996 and formed The Linder Firm. Over the 25 years since, he has grown his firm and merged it with other lawyers. Together, they have grown their group to more than 20 lawyers and 15 support staff, with offices in both Dallas and Collin County.

For example, he cites numerous cases in which one spouse or the other stole retirement money, diverted funds, hid assets, or hacked the other spouse’s email or cell phone.

“There are things I can do to navigate my client through their family law case, and advice that I can give them on what they can and cannot do to avoid their actions getting them charged criminally; and if I think the other spouse is engaged in some type of criminal behavior, I can usually use that to my client’s advantage.”

Linder’s experience in the criminal defense practice was an essential element in the recent successful representation of a Dallas woman whose husband had just been sent to federal prison for bank fraud. She had been married for more than 30 years and had children, grandchildren and large financial obligations. Even though she was well-educated, she had no career to fall back on in order to meet her family’s financial needs.

Because of the husband’s bank fraud conviction, the federal government had put liens on their homes, and frozen all their bank accounts. The client called her family law attorney, Chris Lake, who in turn called Linder.

“I was able to figure out which federal agency had seized all their assets. I was able to reach out to the supervising attorney at the United States Attorney’s Office, and over a period of a few months was able to negotiate the release of the bulk of her assets. She was then able to get back into her house with enough money and property to support her family. That’s something a lawyer without my knowledge and experience in the criminal justice system would not have been able to do,” Linder says.

“Even though I have had the privilege of working with such incredible influencers on the criminal justice side of the docket and originally built my practice around criminal defense, I also really enjoy practicing family law and have been lucky to work with some of the best family lawyers in North Texas. I like working with people, rather than corporations, and there are a lot of family law cases that have criminal law implications. No matter the criminal allegations – real or otherwise, these are serious issues that have to be ferreted out before a family law case can come to a proper resolution. Like criminal defense, family law is a very personal practice of law. You are meeting and working with good people who are experiencing a very tough time in their lives, often through no fault of their own.”

Since leaving the District Attorney’s Office in 1996, Linder has handled more than 150 jury trials to verdict and handled countless other cases that were dismissed or no billed due to his professional efforts. Cases ranging from DWIs and other misdemeanors, to violent crimes in state court, to complex, multi-defendant drug conspiracy and health care fraud cases in federal court. He has appeared on the A&E Network show “After the First 48,” where he defended a local man charged with capital murder. He is also currently discussing one of his upcoming trials with the A&E Network, which may be featured on their new series “Accused – Guilty or Innocent.”

Linder’s personal mantra is posted in his office and engraved on his Road ID bracelet: Wisdom, Integrity, Perseverance and Patience.

“I try my best to conduct my personal life and guide my law practice by these principals,” he says.

Linder says a trial lawyer, like a cyclist becomes more proficient with experience. The four tenets of his mantra apply equally to both and were developed through 30 years of trial and error, hard work, and a commitment to seeing the “race” through to the end.

He says when he started practicing 30 years ago, his attitude was all about trying to represent his clients well and do whatever he could to win and to build a successful practice. But over the years, he began to see things in a different light. The first part of his mantra came early.

“As a believer, I’ve always tried to operate with wisdom and integrity. I respect other lawyers, judges and the legal system itself. In turn, I work hard to earn their respect.”

The second two tenets of the mantra had to be learned over time. “Perseverance and patience are acquired character traits. They are generally not traits innately possessed by most 25 to 35-year-old lawyers. They come with age and experience.”

Linder is one of those fortunate few who combines his passion for a vacation with an equal passion for an avocation.

“Cycling is a time when no phone is ringing and no people are walking into my office, a time when I can become singularly focused on big issues. Whether I’m challenged by a particularly hard route, or a challenging case, I have learned over the years what perseverance it takes to make it to the finish line.”