Robert Bennett: Strength in the Face of Injustice 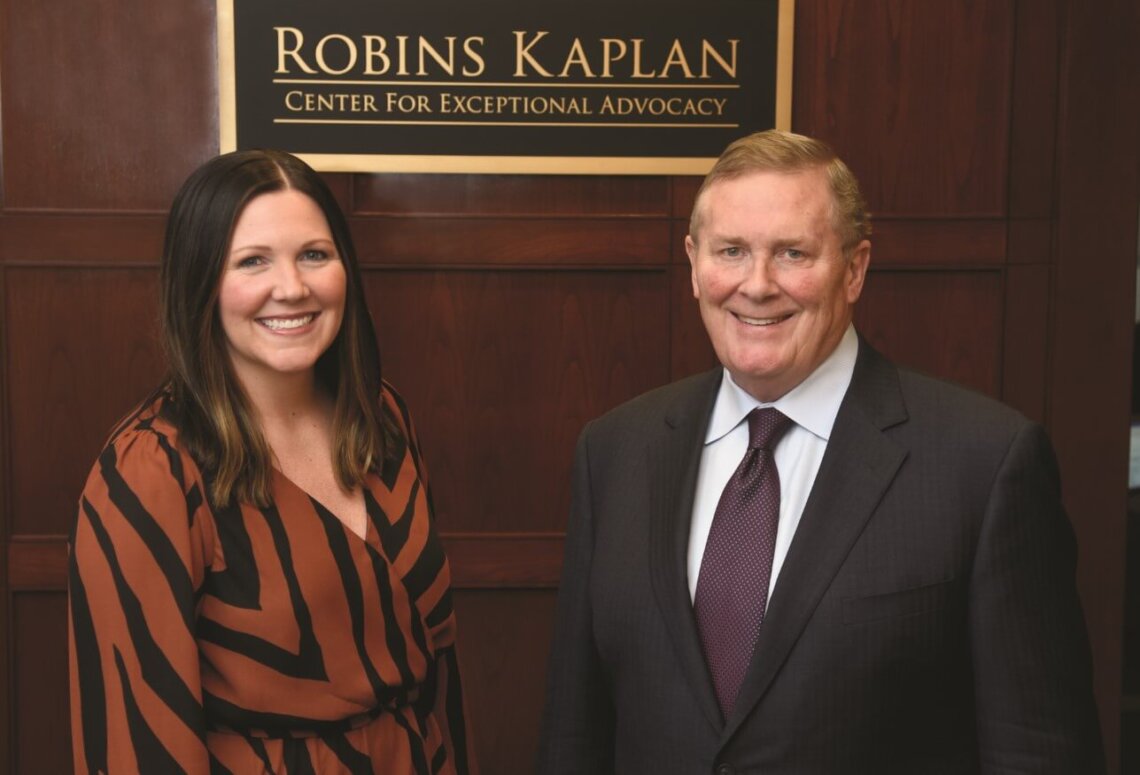 In January 2020, Robins Kaplan LLP welcomed four distinguished attorneys to its Minneapolis office: Robert Bennett, Katie Bennett, Andrew Noel and Marc Betinsky. Collectively, these civil rights and personal injury attorneys possess more than 75 years of experience representing clients in an array of matters and have secured in excess of $100 million on behalf of victims. They have triumphed in cases involving civil rights violations and police misconduct, police shootings, and prison neglect and abuse. In 2019, they achieved the largest ever settlement of a fatal police shooting case nationwide with the landmark settlement of $20 million with the City of Minneapolis on behalf of the family of Justine Ruszczyk, who was shot by a Minneapolis police officer in July 2017.

Peter Schmit is chair of Robins Kaplan’s national personal injury and medical malpractice group. He says he is thrilled to add lawyers of such fine quality to the firm. “Their mission of helping people who have been wronged matches our department’s perfectly. We believe their 1983 civil rights work is important, and we look forward to advancing it further. We are proud to have one of the best groups in the country at Robins Kaplan.”

After Bennett and his team collaborated with attorneys at Robins Kaplan to help secure more than $54 million on behalf of victims of the Minneapolis 35W bridge collapse, he says a merger seemed inevitable. “Over the years, we talked about joining forces one way or another,” Bennett says. “It makes perfect sense when you think about it. We’re a great fit and have a tremendous amount of synergy with the team here. It’s like putting the fifth finger in the glove. We’re excited about adding civil rights 1983 police conduct work to the Robin’s portfolio.”

A civil trial specialist certified by the National Board of Trial Advocacy and Minnesota State Bar Association since 1989, Bennett has not only righted the wrongs done to his clients, he has helped shape policies that will protect the civil liberties of generations to come.

“I started out in my career trying regular car accidents. Whether the light was red or green does not have so much societal significance as this work does. This is what gets me going and keeps me going in terms of thinking I’m doing the right thing for myself, my kids and the people in my town. There’s extra juice that comes with this kind of work.”

Looking back, Bennett says the two cases that give him the greatest satisfaction are those involving Abbey Taylor and Justine Ruszczyk.

In 2008, 6-year-old Abbey Taylor died from injuries she received from an improperly maintained wading pool drain. In each case, a portion of settlement funds were donated to charitable causes committed to preventing future tragedies.

“It’s bigger than just the families involved,” Bennett says. “These are big cases monetarily, but they are also big on a societal basis. There are so many people who did great work, including the Taylor family who created Abbey’s Hope, and John Ruszczyk who contributed a large sum to the city where his daughter was shot. It’s an act of grace when something like that is done.”

Referencing the Ruszczyk case, Bennett recalls, “The things that happened at that trial demonstrated that the police were essentially more concerned about themselves than the poor woman who was dying in alleyway. Thee whole process showed what lengths they were willing to go to in order to protect the accused officer and proved without a doubt that the blue wall of silence is alive and well in Minnesota. Hopefully, the police got the message that now they can get convicted of murder and face the consequences. Cases like this should prevent these things from happening in the future.”

With seasoned attorneys in eight key cities from coast to coast, Robins Kaplan represents clients in cases across the spectrum of medical malpractice and personal injury matters, and on boarding Bennett is an opportunity for the firm to extend its expertise to police misconduct cases.

“We are looking to expand this not just in Minnesota, but in other areas where we have offices,” Schmit says. “Bob and others on his team are going out to offices in New York, California and Boston in the next 60 to 90 days, and we are optimistic that once they are exposed to his group’s level of expertise, this will be a growth area for us.”

Bennett and his team will also enhance Robins Kaplan’s already extensive work in the area of medical malpractice by expanding its representation of cases relating to the quality of medical care provided to people who are in jails and prisons throughout the country.

“We’ve handled some one-off s where the care rendered was just horrendous — and these were not people who were in for a life sentence,” Schmit continues. “They were just in jail waiting for some determination. With the lack of resources, the terrible results are foreseeable. This is another area where Bob’s team has been successful and where we’ve had success. We will continue to look at that, especially as for-profit organizations are running a lot of prisons and making money while providing inadequately for inmates.”

Katie Bennett is a graduate of William Mitchell College of Law and was named Attorney of the Year by Minnesota Lawyer in 2014. She is also Robert Bennett’s daughter and a key member of his legal team. She says that the high degree of substance abuse and mental illness among inmates combined with inadequate medical care on the inside is a deadly combination.

“Unfortunately, we’re seeing an increase in jail suicide cases that could have been stopped,” she says. “Often, people are dealing with mental health issues by self-medicating with drugs on the outside. Once they get sober, their mental health issues end horribly for them. Medical care is a Constitutional right to people who are incarcerated. In Minnesota, there are private correctional companies that are running prisons as a business and violating the rights of the inmates they house.”

Known as “Bob” to his friends and colleagues, Bennett is enthusiastic about how working with Robins Kaplan will amplify the call to justice. “Having more resources means we don’t have to feel pressured to settle cases; we can be patient and righteous, and use our shared tenacity and determination to accomplish the best result. I feel confident that as we expand our practice to Boston and wherever we have enthusiastic partners, we will do big things.”

It’s not often that two legal titans like Robins Kaplan and Robert Bennett join forces. There can be no doubt that this phenomenon is a good thing for the cause of justice.

“We’re here to seek justice for people who need help getting it, right the wrongs and get fair compensation for their injuries and damages,” Bennett says. “When we can influence and change the system, we do that too.”