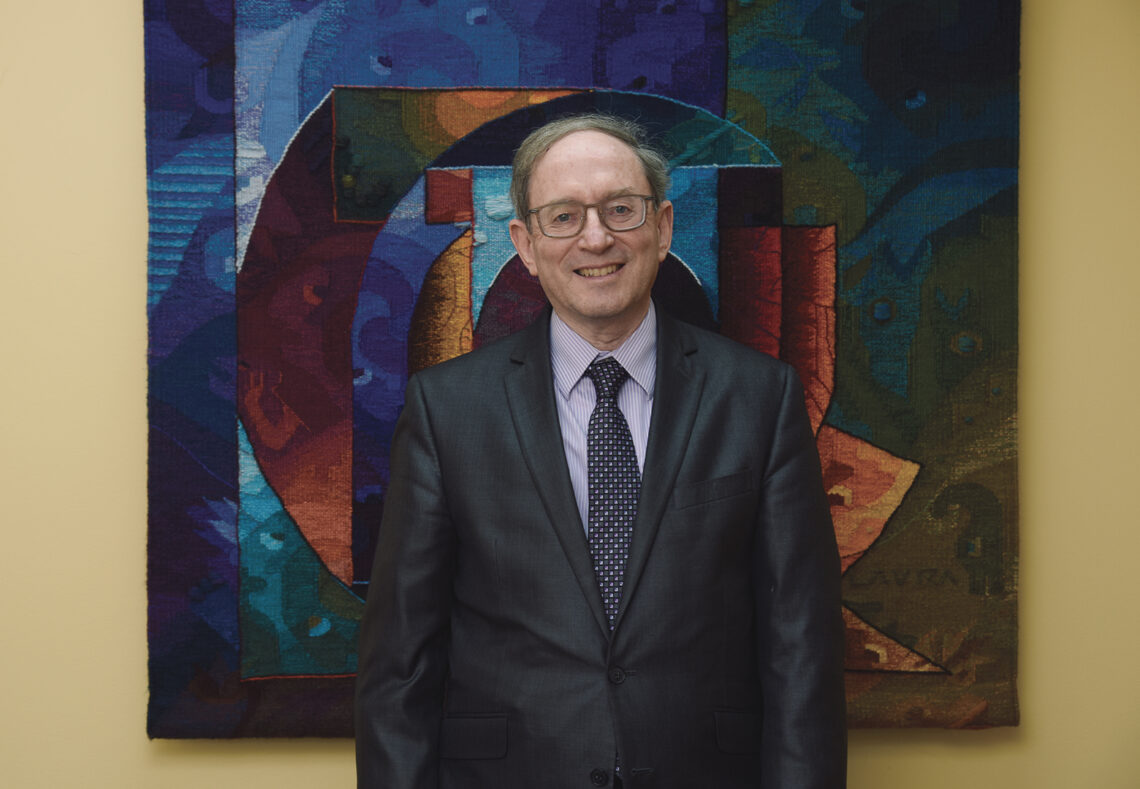 Attorney Steven Thal may hail from the small burg of Watertown, Minnesota, but he possesses a decidedly global point of view. For more than 35 years, he has helped people resolve complex issues relating to U.S. immigration — issues that often have far-reaching consequences for their families, careers and even their personal safety. Thal and his compassionate team of attorneys and staff assist clients from the Midwest, nationwide and overseas, who are seeking status in the United States.

According to Thal, “The reward of doing immigration law is hearing other people’s stories and then getting to tell them.”

From Family Farm to Counsel Table

Thal grew up on a beef cattle farm, and became state president of the Future Farmers of America (FFA). “Through that organization, I developed a lot of interest in public speaking, and I won a number of state speaking contests. Later, in college, I took a course in TV and radio production and joined the University of Minnesota debate team. I didn’t know any attorneys growing up, but I think my communications background ultimately compelled me to a career in law.”

While earning his undergraduate degree from the University of Minnesota, Thal and his wife (who was also a student) worked with the University’s International Student Advisor’s Office as well as the nonprofit Minnesota International Center, now Global Minnesota. After graduation, they spent two years together in the Peace Corps serving in the rural community of Puerto Limón, Ecuador, South America.

From their unique vantage point on the western edge of the Andes Mountains — where there was no running water, electricity for only a few hours at night, and communication with the outside world required a series of connections through ham radio operators — Thal says it was a chance to “see how the world sees you. It was important for us to come back and share our experience with others and expand on what we had learned. I probably wouldn’t be doing what I’m doing today if it hadn’t been for the Peace Corps.”

Following their experience in Ecuador, the Thals had a desire to sponsor students to stay with them back at home. “It’s the first immigration work I did,” Thal says. “We made the visa applications and, as the sponsors, we went to the consular interviews. Both students we sponsored ended up attending high school in the United States, and one graduated from the same high school I did. We still maintain contact with the families in Ecuador.”

The Thals have since hosted many more international students.

Thal returned to the University of Minnesota to earn his law degree, while his wife earned her master’s degree in social work. He began his career with a small, general practice law firm, where he represented clients in matters spanning contracts, business formation, personal injury, criminal defense and family law litigation. He opened his own practice in 1988, bringing his broad legal experience and Spanish language skills to bear on immigration matters.

Making a World of Difference

Thal’s immigration practice touches on virtually every aspect of immigration law. He employs a diverse staff, many of them immigrants, some of whom have been with his firm for well over a decade.

Thal emphasizes that communication and care are vital to creating successful outcomes. “We go through a lot of training and investment to develop the expertise everyone needs to help people. A lot of clients develop great relationships with our staff, not just our attorneys. We have a large Hispanic clientele, so everyone here speaks Spanish. Since the ’80s, there has been an increasing Hispanic population in the area with a need for immigration services. I also have strong ties to the Liberian community. Somalians are another group I did a lot of asylum cases early on. Many were here because of the wars in their country. That later evolved to, after they were granted asylum, applying for permanent residency and citizenship and applying for other family members to join them.”

Thal is a member of the American Immigration Lawyers Association (AILA) and has served in many leadership roles at state and national levels. He has also served as chair of the immigration section of the Minnesota State Bar Association. Thal is the recipient of numerous honors. In 2001, he received the AILA’s National Presidential Award for Tireless and Creative Advocacy.

“Advocacy has always been an important part of my career and practice. For years, I have taken clients with to Washington, D.C. to lobby Congress for changes in our immigration laws.”

Threads That Make the Whole

As Thal asserts, immigration law is about telling people’s stories — who they are, where they come from and the reasons they are seeking a new life in a foreign land. During his career, Thal has been the raconteur of thousands of stories — each one unique, each one meaningful and, some, downright epic.

Take, for instance, the story of Marieke Penterman, who immigrated from Holland. Marieke missed Dutch cheese, so she decided to start making her own gouda. What began with a midnight revelation led to her taking the title of Best Cheese in America at the 2013 U.S. Cheese Championship. As her lawyer, Thal saw a unique opportunity. He suggested that Penterman apply for an Extraordinary Ability Visa — a green card for people whose achievements are internationally recognized. Her status was approved and, today, Marieke is producing 330,000 pounds of cheese each year and continues to accumulate awards for skill in caseiculture.

Thal also had a hand in securing a national treasure. After meeting the famed Latin jazz musician Ignacio “Nachito” Herrera at a fundraiser dinner, Thal offered to assist him pro bono with the immigration of his wife and two children who were still in Cuba. “The family finally got visas, the only ones at the time issued by the U.S. Interests Section before we established diplomatic relations with Cuba. Then I began work on their green cards and, later, their citizenship. “

Thal recalls an amusing anecdote that unfolded when he arranged for Herrera to perform at his own swearing-in ceremony as a U.S. citizen. “At the venue auditorium, all they had was an out-of-tune upright piano. We couldn’t have him play on that, so we arranged to have a grand piano brought in, but it got stuck in the hallway. We had to find a baby grand and finally got it to the ceremony.”

The ceremony ended on a profound note. Thal adds, “Nachito wrote and performed a special piano arrangement of ‘America the Beautiful’ and, his daughter, Mirdalys, who had naturalized earlier because she joined the National Guard, sang. So many newly minted citizens came up afterward to Nachito to say, ‘Thank you for representing all of us. You show what we have to offer America.’”

Nachito was later honored by the American Immigration Council with the American Heritage Award, its highest honor. The prior, most recent Latin musician to receive the honor was Carlos Santana.

Thal’s immigration odyssey has also hit home personally, and the story reads like a chapter from a James Michener novel. Thal was perusing the St. Paul newspaper one day in the early ’90s, when he saw an article about an international business consultant by the name of Edward Thal. Since it’s not a common name, Thal wrote to the man, and they agreed to meet and explore whether they were related. A family story had been handed down to both Thals about forebears who had supplied horses to Napoleon — and they knew instantly they were kin. It turns out that toward the end of the 19th century, one branch of the Thal family had immigrated to America from Germany, and the other branch went to South Africa. For a hundred years, the two branches did not know of each other’s existence. Thal later helped Edward’s brother, Phillip and his family immigrate to the United States after seeking asylum for opposing apartheid in South Africa. The story was retold in the book “Asylum” under the pen name Hugo Thal.

Through the millennia and from culture to culture, people have woven narratives into fabrics, using textiles to communicate the stories of themselves, their communities and their values. Many cultures did this before they had a written language or a literate population. Yet, they wove their stories into cloth, preserving their legacies through the ages as works of art. It is notable, however, that if you look at the back of a tapestry, you will see a tangle of knots and threads. In like manner, Thal is a teller of stories and a weaver of the American tapestry. Every added thread becomes part of the sometimes messy, but undeniably beautiful, fabric of our diverse nation.

“We don’t always realize what opportunities we have and the great system of government we enjoy,” Thal says. “There are so many hard-working immigrants who come here and are so elated to make a new life with all this opportunity. Many are willing to do jobs native-born citizens are not willing to do. Ordinary people can make something of themselves here; they can provide a service or create jobs. From cleaning ladies to executives, people do amazing things when they’re given the opportunity. Hopefully we can begin to see America once again as a nation of immigrants and a welcoming place for all people.”