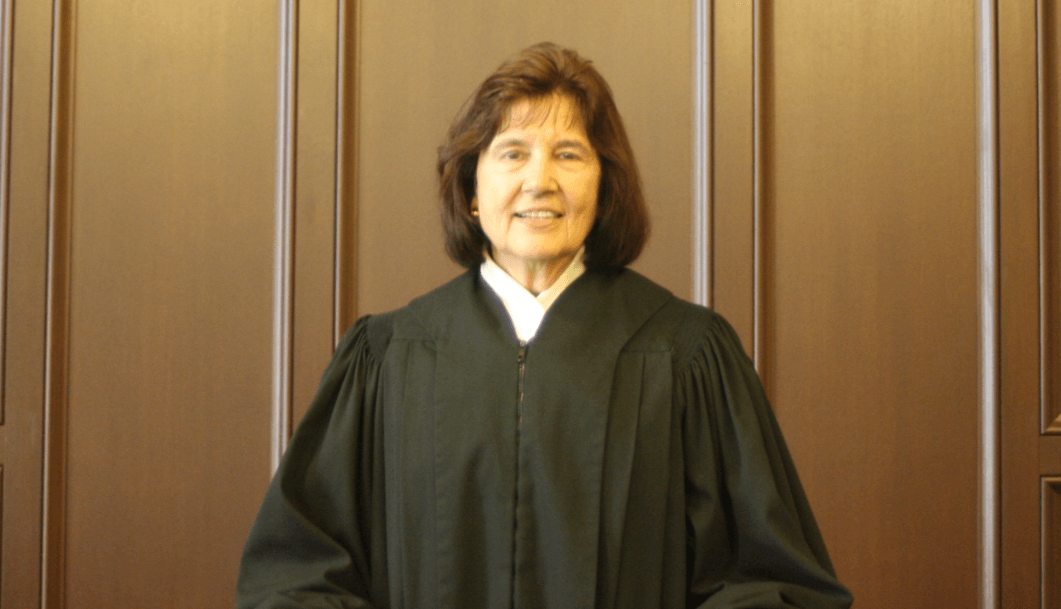 Judge Linda McGee straightened her white collar and pulled on her black robe in the judge’s conference room and headed for the bench as she has for 20 years. “I continue to be interested and excited when I pick up 12 cases that I need to read for a session of court,” she said.

McGee was named chief judge of the North Carolina Court of Appeals in August by then North Carolina Supreme Court Chief Justice Sarah Parker. McGee has served on the court of appeals since 1995 and is now the first woman to be chief judge since 1979.

The seat on the appellate bench is a long way from McGee’s upbringing in Marion, North Carolina. The daughter of textile workers, McGee was the first member of her family to attend college. Local attorney E.P. Dameron took an early interest in McGee and encouraged her to go to law school. She graduated from UNC with a Bachelor of Arts and earned a law degree from UNC School of Law. McGee said she was pleased be able to follow in Dameron’s footsteps serving on the North Carolina Board of Law Examiners. “It’s a public service which he showed me is a great responsibility in addition to an opportunity,” McGee said.

McGee practiced law for 17 years with the Boone firm of di Santi, Watson & McGee. She found herself in the courtroom most days handling a variety of cases, from real estate law to family law to criminal defense. “I think its a great experience for someone who has seen the practical end of practicing law to be able to inform their opinions when they are on an appellate bench,” McGee said. “When I’m writing an opinion, I keep the lawyer’s next client in mind. I want the lawyer to be able to pick up my opinion, understand the law and be able to share that with their client. The opinion needs to be clear, straightforward and relatively concise.”

As McGee begins her stewardship of the 15-member North Carolina Court of Appeals, she said “fairness and efficiency in the court system is our only agenda. Our first role is to do our work here and understand that the people whose lives are affected deserve as fair and correct a resolution as we can possibly find for them.”

While in college and law school, McGee spent her summers working as a reporter for local newspapers The McDowell News, The Clayton News and The Benson Review. McGee briefly considered a career in journalism as a way to report about how government affected people. Instead, she decided the way to help people was to become a lawyer. Some of the skills McGee acquired as a reporter, she now applies to her work on the court.

“You do have to get at the heart of matters,” she said. “The skills you develop in journalism have assisted me in having very direct, succinct opinions.”

McGee was one of what she describes as the “founding mothers” of the North Carolina Association of Women’s Attorneys (NCAWA) in 1978 when she was still in private practice. One of the primary goals was to give women in law a chance to work on issues that affected women. “For instance, changes in marital property laws, dealing with custody, divorce and distribution of property within the family. We thought women lawyers would be the appropriate people to develop an expertise and through that make positive changes.”

According to McGee, the major goals for the NCAWA have not changed. “To make certain that the viewpoints of all society are looked at and considered; if the women lawyers have an expertise or the black lawyer’s organization has an expertise then they ought to be able to share in helping develop laws that consider those viewpoints.” McGee is also literally the mother of two adult sons, one a lawyer and one in real property management.

McGee was also one of the first co-chairs of the North Carolina Bar Association Foundation’s Lawyers in the Schools program (now called the Law- Related Education program). She is being honored in November for her leadership and service to the program. The LRE programs reach 12,000 teachers, students and volunteers both directly and indirectly each year. “It is important that young people in particular understand that we have a fair court system,” she said. “If they ever find themselves involved in the court system they need to be aware that it operates to be fair. You always hope that you might inspire a young person to serve in the court system in law enforcement or as judges and lawyers.”

McGee also believes all people are entitled to effective access to the courts. She has promoted that goal in her service on the IOLTA board of trustees and the Chief Justice’s Equal Access to Justice Commission, which she has served since its inception. From her efforts, she received the NCBA’s Pro Bono Award when she practiced law.

McGee now lives at Corolla on the Outer Banks where she and her husband participate in water sports such as kayaking, jet-skiing and walks on the beach looking for sea glass. Another member of the judiciary who also shares a fondness for the North Carolina beaches is U.S. Supreme Court Justice Antonin Scalia. While McGee had met him recently, when she rounded a CVS Pharmacy aisle to come face to face with Scalia again, they enjoyed friendly conversation but no shop talk.

Now, as to the 1969 photo of her in the The McDowell News with her golf tournament trophy … . McGee had just taken golf in a physical education class the previous semester at UNC. “I was trying to remember if there were actually any other women who played in the tournament,” she said with a laugh.