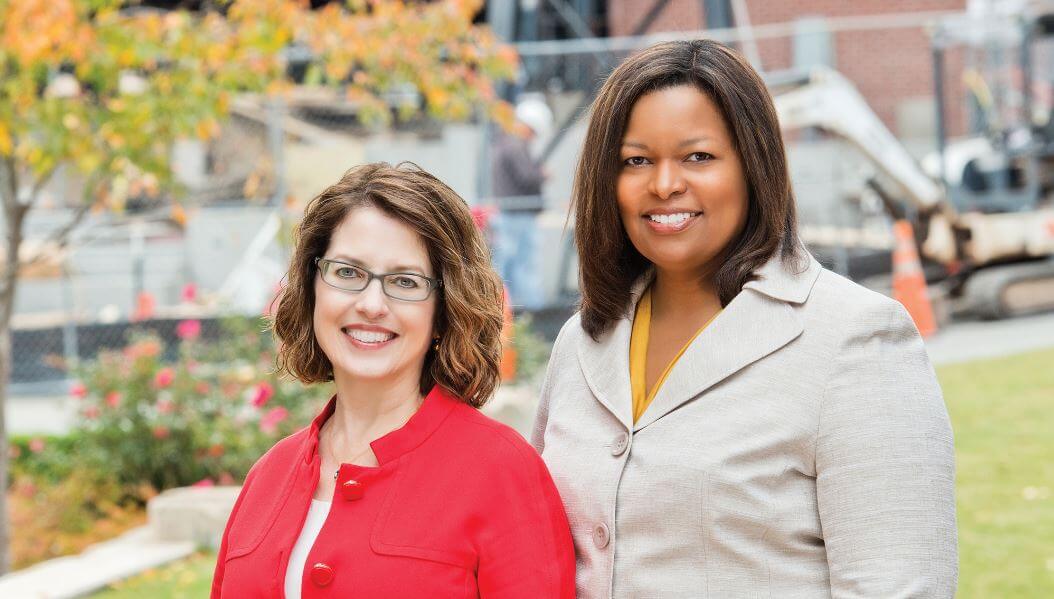 Durham workers’ compensation attorney Valerie Johnson’s book never made the New York Times Best Sellers list nor are you likely to see a movie version at the multiplex, but the 2014 book she co-edited, “North Carolina Workers’ Compensation Law: A Practical Guide to Success at Every Stage of a Claim” is as much a labor of love as mass-market blockbusters. Johnson drew upon her vast experience with workers’ compensation matters in compiling a primer for other lawyers.

Valerie Johnson, Leto Copeley and Ann Groninger formed Copeley Johnson & Groninger PLLC in 2011 with workers’ compensation as a core practice area. Johnson’s practice primarily focuses on claims for state employees, union members, police officers and bus drivers. Copeley handles other workers’ compensation cases while working on the personal injury segment of the practice. She also represents victims of sexual harassment in the workplace and victims of sexual abuse. Copeley and Johnson often work on their cases as a team in the firm’s Durham office. Groninger practices personal injury law, with a focus on bicycle accident cases, in the firm’s Charlotte office.

The partners have been included on the Best Lawyers in America list for the past 10 years and the North Carolina Super Lawyers list since 2006.

Early Experiences The paths for Copeley and Johnson were paved by experiences earlier in their lives.

Growing up in Henderson, North Carolina, Johnson would hang out at the courthouse and watch the proceedings. “There was one particular case in which a man had stolen a can of food from the local grocery store,” Johnson recalled. “Because he was arrested frequently, he got time for something that in my 14-year-old mind just said he was hungry. I thought it was unfair.”

Copeley worked her way through college waiting tables, cleaning houses and working in an auto parts factory. “I know how hard it is to work at a blue-collar job,” she said. “It is physically demanding.”

Copeley’s father was a doctor who made house calls to some very depressed neighborhoods in the rural New Jersey area where she grew up. “It made me very conscientious and instilled in me the duty to help others who weren’t as fortunate as I was,” she said.

“State and local government employees have different benefit structures than other workers, and the intersection of state employees’ benefits and workers’ compensation should be explained to every affected employee,” explained Johnson.

“Workers’ compensation is not an intuitive field of law,” Johnson said. “It often doesn’t make sense to people how we draw the line between an injury by accident or an occupational disease and an injury that is not going to be payable under workers’ compensation law.” She uses her experience as an elementary school teacher in explaining the vagaries of the law to clients. “It really is my mission to help people navigate through the system.”

Johnson and Copeley explain to clients the link between a workers’ compensation claim and a personal injury claim. “When an employee is injured due to the fault of some other party, such as a car accident when the employee is traveling as part of their job, the workers’ compensation and personal injury awards need to be coordinated to ensure that the recovery from both sources is maximized,” said Johnson.

“Sometimes the workers’ compensation case can have more value than the personal injury case or vice versa. We understand both cases so we know which case to pursue more aggressively,” added Copeley.

Collective Bargaining The firm does a lot of work with union employees such as those in the manufacturing and service industries in the private sector.

“We’re very supportive of the rights of working people,” Johnson said. “For example, we’re used to examining leave policies provided under collective bargaining agreements for those injured workers receiving workers’ compensation benefits. And for those who are not receiving workers’ compensation, careful consideration of short and long-term disability benefits and subrogation rights must be made.”

“We may be aware of what the particular collective bargaining agreement provides so we understand how the settlement of a workers’ compensation claim may affect their receipt of other benefits or their employment rights,” said Copeley.

Mad Men “If you watch ‘Mad Men,’ you realize that the world has changed. But there is definitely still sex discrimination and sexual abuse for women the higher up you go in the traditional work world. Sexual harassment cases involving women are the most prevalent in male-dominated fields such as construction,” said Copeley, who handles sexual harassment and sexual abuse cases.

In some situations, the firm acts on a behind-the-scenes basis. “Such as when a university student is about to be expelled, a corporate executive is accused of an impropriety, or a consensual affair happens between two people at work which may threaten the jobs of those two individuals,” said Johnson.

“Victims and their families are now much more willing to come forward than previously. Awareness and reporting are on the rise. I think police departments and law enforcement are starting to take these situations seriously. We’re very fortunate that in North Carolina there is no statute of limitations on felony sexual assault crimes, so for victims of sexual abuse, that’s a good thing,” said Copeley.

Tales of Past Clients Copeley and Johnson bookend our conversation with tales of past clients who suffered job-related injuries and received favorable settlements.

Johnson recalled receiving a Christmas card from a former client who had been injured on the job. She used her settlement to get her GED, go to community college, start a business and was about to get married. “Her whole life has turned around,” said Johnson with pride.

Copeley handled a claim for a client who suffered foot and hand injuries on the job and found it difficult to find a new job because of the injuries. “He called the other day and said, I was able to take the settlement money and invest it. Now he has a little business and he’s been able to make some money and keep going,” explained Copeley. “It’s very nice for him to be able to do that. It’s very gratifying when that happens.”