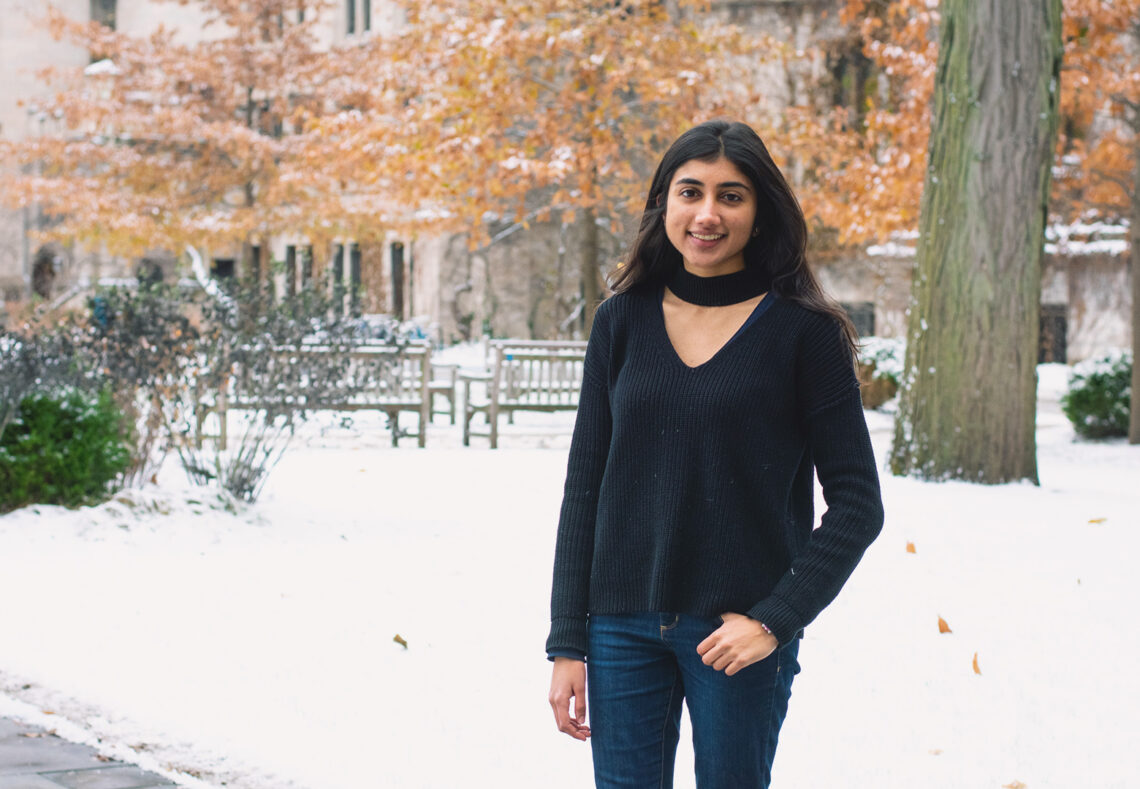 Devshi Mehrotra was a freshman computer science major in 2015 at the University of Chicago when a video from the prior year’s murder of Laquan McDonald by a Chicago police officer was released to the public. A dashcam video showed the 17-year-old African American was unarmed and walking away from a police officer, not coming forward with a knife as police claimed.

The event had a profound impact on Mehrotra. “In the aftermath of this murder, I saw the local government investing a lot of its resources in creating gang databases, investing in facial recognition software, and creating data centers for advanced policing,” said Mehrotra.

She noted that public defenders appeared to be at a disadvantage when it came to access to technology.

“I entered my senior year with a very, very strong sense that I wanted to be of service in addressing this inequity, but I had no idea how exactly to accomplish that.”

Mehrotra and classmate Leslie Jones-Dove enrolled in an entrepreneurship course and fostered the idea for JusticeText. Mehrotra serves as CEO of JusticeText, and Jones-Dove is the chief technology officer.

“One day, Leslie and I decided to cold email the Cook County Public Defender’s Office. We simply showed up at their office, and that’s how we got started”

The most common types of audiovisual discovery are video interrogations, body-worn camera footage, and calls such as 911 or jail calls.

“Audiovisual evidence is a powerful vehicle for justice,” said Mehrotra. “JusticeText is strengthening the ability of public defenders to analyze this crucial data with our evidence management software.

“Under the status quo, public defenders are frequently swamped with high volumes of discovery a couple of weeks or even days before trial,” she added. “Even with advance notice, it can be incredibly difficult to digest hours of information while simultaneously managing hundreds of other cases.”

“Our service generates an automated transcription of the uploaded evidence, notifying you immediately upon completion,” she said. “Our interactive editor makes it easy to edit the content, take notes, create video clips, and export the generated transcript.

“We also identify keywords that may be of interest to attorneys, including references to crimes, medical conditions, legal terminology, and more,” she added. “We are working to create the infrastructure needed to review, catalog, store, and transfer audiovisual data within the criminal justice system.”

The initial prototype for JusticeText was developed in collaboration with attorneys at the Cook County (Illinois) Public Defender’s Office, which in 2019 handled more than 75,000 cases with a staff of about 700. “JusticeText has now been formally deployed in a few indigent defense agencies like the New York County Defender Services,” said Mehrotra. “We are also piloting with offices like PDSDC, Queens Defenders, Maryland’s statewide Office of Public Defender, North Carolina’s statewide Indigent Defense Services, Harris County Public Defenders, and Still She Rises.”

The company is working on a roll-out to criminal defense attorneys.

JusticeText was named a 30 Under 30 for Social Impact by Forbes this year. It won the 2020 Duke Law Tech Lab Demo Day. Four companies had competed for top prize.

Each of these teams represents important opportunities for technological innovation in law,” said Jeff Ward JD/LLM ’09, director of the center and associate dean for technology and innovation at Duke Law. “Even more though, these founders possess the right attitude. Law can do better. Law must do better. And these are the visionaries who will help get us there.”

“We hope that our work will shed light on how important it is for technical innovation and capital to be invested in strengthening public defense,” said Mehrotra. “Our dream is to be able to serve every single public defense office in this country while trying to tackle the access to justice gap with the private criminal defense market as we work with court-appointed private attorneys.”