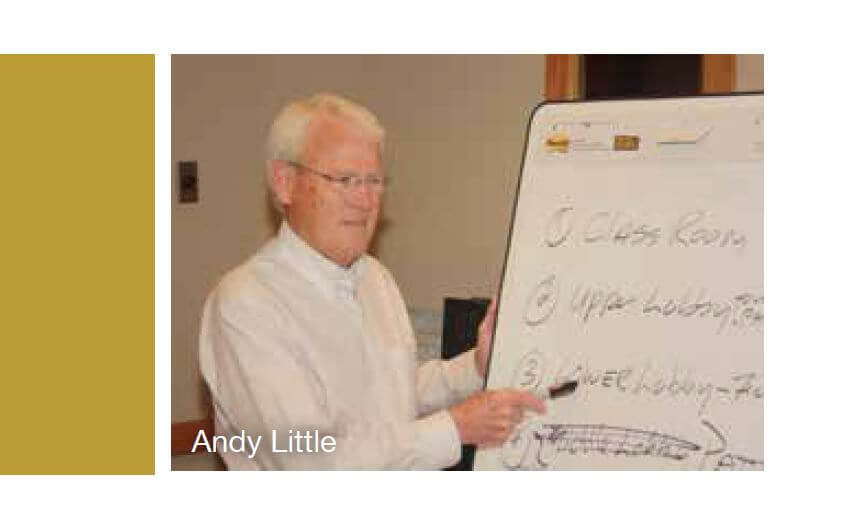 “Mediation has been successful beyond imagination,” said Andy Little, president of Chapel Hill-based Mediation, Inc. as he observed the settlement discussions in Delta v. Willis.

Delta v. Willis is a fictional, collection claims case that Little uses for role playing during the five-day, 40-hour, mediation workshops his company holds in Raleigh and Charlotte.

Half of the attorneys who attend the workshops will go on to become certified as mediators. The rest of the class are attorneys, business people, insurance claims representatives and HR specialists who want to learn negotiation skills and techniques. “It’s amazing but true, most attorneys, business people and professionals have never taken a negotiation class in their entire academic careers,” said Little.

“Here they learn negotiation theory and skills and put it all into practice negotiating the settlement of five superior court case simulations.”

Making Money Talk Little is considered one of North Carolina’s foremost authorities on mediation. In 2007, he authored, “Making Money Talk” a book on mediating litigated cases published by the ABA. “My approach to mediating civil litigation involves traditional, facilitative mediation techniques as a substitute for the more directive approach that characterizes mediation in many courts.”

Little earned his litigation stripes on the job as a trial lawyer for 17 years handling criminal litigation as an assistant district attorney and in civil litigation as a solo practitioner and later as a partner at Northen, Blue, Little, Rooks, Thibaut & Anderson in Chapel Hill.

In 1989, he chaired an NCBA committee that studied the use of mediation in civil cases. That led to the establishment of the mediated settlement conference requirement in superior court and the establishment of the Dispute Resolution Commission. Little was appointed to the commission by the North Carolina Supreme Court Chief Justice and later chaired it for four years.

Little formed Mediation, Inc. in 1992. As a certified mediator he has conducted over 5,500 mediations and been the lead trainer for 130 of the certified mediation training workshops put on by his company.

Streamlining Cases Gone are the days when settlement discussions were not conducted until the day a case went to trial. “We’d spend a lot of time and a lot of the client’s money preparing cases for trial that never got tried,” recalled Little. Now, mediated settlement conferences are required at all levels of state and federal courts in North Carolina.

Those conferences are typically ordered four or five months after a case is filed and held two to four months before trial. “Mediation streamlines the practice of law and is more time and cost efficient for the clients and their attorneys,” said Little.

Mandatory mediation takes away some of the brinksmanship as to which side will make the first call to schedule a meeting. “It’s no longer a matter of, how am I going to approach the other side without looking weak,” said Little. “Court really has become a forum of last resort. Mediation jump starts the conversation between the attorney and the client as to the risks and weaknesses in their case. It can help the client go from ‘I want to sue the heck of them’ to ‘What’s the best way to negotiate a settlement?’ From the very start of a case, we can begin discussing settlement negotiations with our client and building a bridge with the other party.”

In his workshops, Little teaches theory and skills. “In mediation, we nudge the parties to go beyond the problems and look for solutions that work for everyone. We urge them to use questions instead of arguments, to move from arguments to understanding the other side’s position. The person playing the role of the mediator learns to keep negotiations on track by regularly summarizing what each of the parties is trying to communicate.”

In Delta v. Willis, Little coached each student as they played the role of the mediator and the attorneys for the two sides. “For the person mediating, it gives them a chance to see what worked well and what didn’t. For the ones playing attorneys and clients, they learn to become productive negotiators. They get a 360-degree view of a case.”