vTestify: The Future Of Testimony Is Here 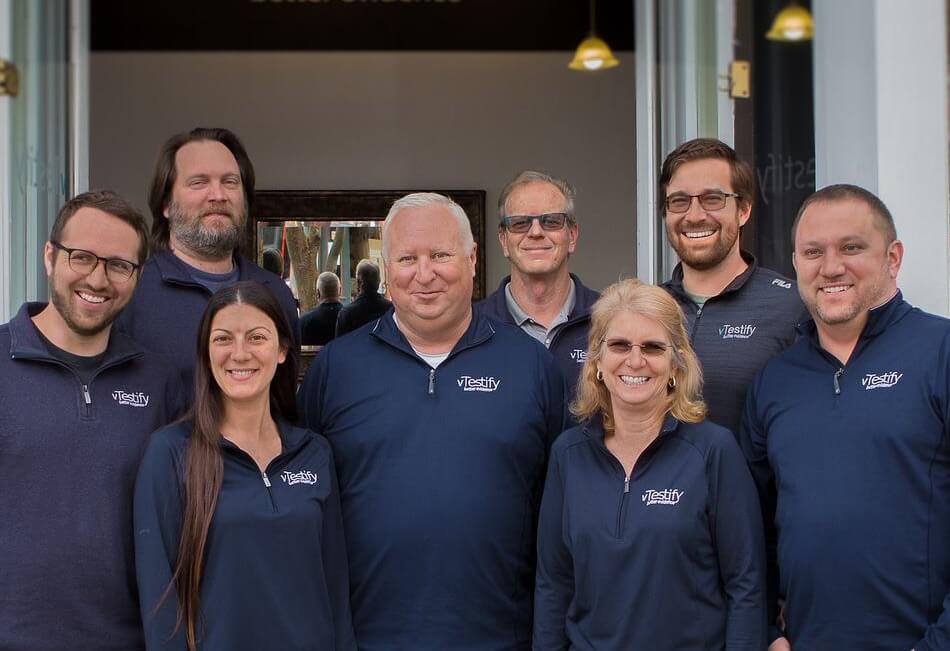 “There are three keys to success in business,” explained Mike Hewitt, co-founder and CEO of vTestify, “One, know your customer. Two, be customer focused. Three, present a solution that solves their problem.” These principles have guided Hewitt along his career and continue with his latest endeavor to innovate the way in which depositions are conducted and testimony collected.

“vTestify’s goal was to create a web-based platform that improved the quality of the evidence gathered, reduced the cost of gathering that testimony significantly, and worked with consumer-grade technology that is readily available, all while not disrupting the way business is conducted within the law firm.”

vTestify was hatched around a kitchen table in Cary, North Carolina, by founders Mike Hewitt, Mike Daniels and Mason Ambrose.

“Ever increasing legal costs affected the decisions I made as a former CEO. A significant portion of those expenses were for court reporters, videographers, travel expenses, etc., which started us thinking and ultimately led to this ambitious journey of innovating a practice that hasn’t significantly changed in over a century,” said Mike Hewitt, the former CEO of Mobile Reach.

As we looked at the litigation market, we saw how rising legal costs were impacting businesses and pricing individuals out of the justice system. In addition, we learned the court reporter shortage trend is an approaching storm off the coast. We’re not sure exactly when or where it will hit, but when it does it’s going to be disruptive to the legal industry.”

Mike Hewitt and his team set about creating a solution to this problem and released the Beta version of vTestify in early 2016. “The feedback on the Beta from law firms across the country was overwhelmingly positive,” he said.

After refining and perfecting the product based on feedback from multiple attorneys, vTestify was formally launched in late 2016. Industry recognition came quickly with acceptance into the Duke Law Tech Lab, where vTestify was selected as the audience favorite during the “Demo Day” pitch competition. Soon after, vTestify was selected to participate in the prestigious LexisNexis Legal Tech Accelerator Program, also in 2017.

“Duke Law School and LexisNexis are well respected legal technology institutions. These programs helped put our name on the map, gave us credibility, and legitimized what we were trying to do,” stated Hewitt.

In October 2017, the company relocated from the kitchen table in Cary, to their new headquarters in downtown Raleigh.

“We looked at every aspect of the deposition process and asked ourselves, how can we make this more efficient and cost-effective?” Hewitt explained.

“It starts with scheduling,” he said. “Coordinating a location for a deposition and setting a date with the witness, the videographer, and the court reporter with travel accommodations can take weeks or even months. We’re told the sooner you capture the evidence the better, as memories fade and the risk of coaching can come into play.

“With our technology,” he continued, “it takes mere minutes. You can stipulate that a notary swear in the witness and certify the transcript. Notaries are much more readily available than court reporters.”

vTestify depositions can be conducted in the same room or remotely, allowing attorneys and witnesses to be in multiple locations and see and hear each other in real time on a split screen. “Everyone can see and hear a witness’s non-verbal communication such as the intention and the inflection in their voice,” said Alex Hewitt, vTestify’s director of operations.

“Often, both sides will go into a deposition trying to decide if the case should go to trial or if a settlement is the best choice. The lead attorney might confer with other attorneys at the firm what they heard and saw during the deposition, seeking advice or consensus on which path to pursue,” said Adam Breakey, vTestify’s director of marketing.

With vTestify, immediately after the deposition, the lead attorney can walk into the office of their partners and immediately show everyone the video from the deposition, along with the vTestify ScriptSync transcript. That information enables the team to use better information to make a more informed decision, to settle or continue.

“We call it, ‘Speed to Settlement,’” Mike Hewitt said.

Which prompts the question, “Why isn’t this the new standard?”

“It’s a matter of changing habits, changing an activity that the attorney is familiar with,” said Mike Hewitt, “More importantly, to make vTestify’s ambition a reality the stars needed to align. Consumer-grade technology had to reach a point of quality and price that even a few years ago would have been hard to imagine. In addition, speech-to-text had to improve on its promise of accuracy. What once used to be only 50-60 percent accurate is now 85-90 percent accurate and continuing to improve rapidly. We’ve found there is an increasing appetite for legal technology services at the AmLaw 100 firms.

“We think our technology is well-timed to meet a series of converging challenges facing the legal industry,” Mike Hewitt concluded.