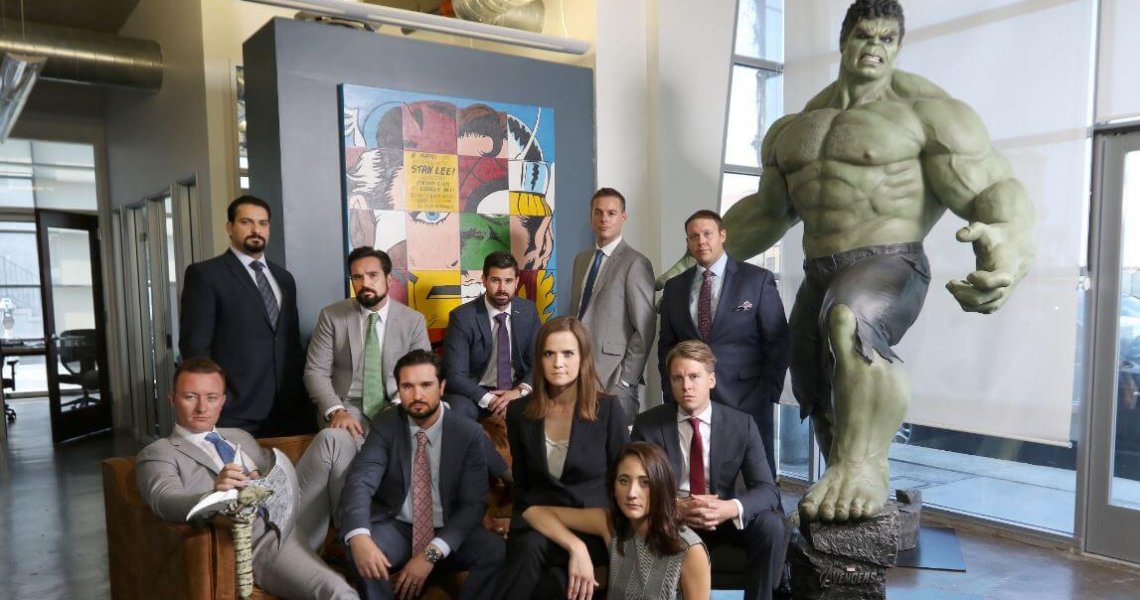 Twin brothers Robert Simon and Brad Simon came together to found The Simon Law Group LLP. The partners have made a name for themselves as dedicated personal injury litigators and trial attorneys.

“It all began with our uncle,” Robert says. At a young age, their uncle experienced a tragic accident that left him paralyzed from the waist down.

“He was working a labor job and was hit by a drunk driver,” Brad says. “The litigation lasted over a year, but it ended up settling during the trial. He received a structured settlement that covered his medical bills and other compensation to accommodate his new life.”

The attorneys his uncle hired were also able to identify that the drunk driver worked at a bank. They pursued a lawsuit against the bank as well. Robert and Brad’s uncle was able to live a comfortable life with his disability, and his wife and children were well taken care of.

That personal experience drove the brothers to make it their mission to represent victims of similar circumstances. At The Simon Law Group, the Simon brothers and their team of attorneys represent victims who are facing an uphill battle in life and the challenges of the judicial system.

“Being able to help them find a bit of justice is well worth it,” Brad says.

While Brad and Robert both wanted to dedicate their lives to the law, they took their years as undergraduate students to evaluate their options.

“I essentially spent three years organizing oversized maps,” Robert laughs. “I knew then corporate law firms weren’t going to be the right fit for me.”

During law school and after, he found his niche in representing injury clients at Lederer & Nojima.

Brad worked as a law clerk in the white collar crime division at Steptoe & Johnson. After graduation, he took a year offto explore other options before enrolling in Southwestern University School of Law.

After earning his Juris Doctor, he joined Lederer & Nojima, working on private equity, mergers and acquisitions as well as finance. He then joined Roup & Associates where he began litigating mortgage defense, earning a strong reputation in the real estate sector.

After three years, the brothers were ready to strike out on their own. In 2009, they launched The Simon Law Group, representing injured clients.

Brandon Simon stepped up to help his older brothers in the foundation of their practice, following his graduation from The George Washington University.

Once the firm was up and running, Brandon took leave to finalize his education at Thomas Jefferson School of Law. While attending law school, he continued to clerk for the firm. Today, Brandon is an associate at the firm.

Over the years, the brothers have built a true family business that calls on the strengths of every member. “We really tried to make this a family affair,” Robert says. “We’ve recruited our parents ‘Big Bob’ and Linda, as well as our sisters, Nicole and Julie, and cousin Lisa to support the business.”

With a staff of nine attorneys, the boutique culture of the firm allows the brothers to keep things light.

“Our office is kid friendly and everyone is considered a part of the family,” Brad says.

In the beginning, the brothers accepted every personal injury case that walked in the door. They built their practice from the ground up, gathering speed as referrals started rolling in.

“Most personal injury firms litigate aggressively,” Brad says. “That’s not our style. We like to work together with the other side to respectfully resolve the case at hand. We’ve continued to receive good results and we leave the table with no bridges burned.”

Since the founding more than six years ago, the firm has continually grown, adding a roster of young attorneys eager to learn. The brothers want the firm to become known as a breeding ground for future generations of trial lawyers.

“We recruit young talent and teach them the essentials of trial law,” Brad says. “We make a point to allow them to have the independence they need to succeed on their own.”

“It’s a team effort, but essentially lawyers try their own cases and receive the deserved credit,” Robert says. “Each young lawyer is given the opportunity to try their own case without our names tied to the victory. This allows them to earn the confidence they need to evolve and grow their practice.”

“We love the opportunity to work closely with our clients and forge lasting relationships,” Robert says.

“We try to be an inspiration to our clients,” Brad says.

Following the successful resolution of one of their cases, a client’s son took an interest in the law. The brothers offered the young man an opportunity to shadow them for a couple hours a week, so he could see if the law was the right fit for him.

“That was a real honor,” Brad says.

Whether they inspire a career or not, the attorneys at The Simon Law Group are just pleased to be able to walk away from a case knowing they’ve done their best to help their client achieve some sense of justice and be able to face their future with a lighter load.

“The big hug after a winning verdict is incredible,” Robert says. “Indescribable, even. We are the attorneys that cry with our clients. We put ourselves in their shoes because we’ve been there before. When you injure someone, you’re not just harming the individual; you’ve changed the life of an entire family.”

After the celebratory hug, the brothers shake it offand turn to the next case. “We don’t forget about our clients or disregard this moment of victory,” Brad says. “We just know there is always more work to be done and another family to help.”

The brothers were both deeply impacted by their uncle’s accident. Robert, in particular, took a keen interest in personal injury cases involving spinal damage.

“Through the millions of dollars of verdicts we’ve achieved, we’ve been able to redefine the landscape for personal injury law,” Robert says. “It’s frustrating,” Brad says, “when you’re dealing with an insurance company that goes out of its way to successfully screw someone over. We will win a verdict and then face an appeal from the insurance company. Often, that move will force the client to settle for less than the amount they originally won and deserve. It’s terrible how they take advantage of innocent people.”

Running a family business, it is immediately clear that family is an important part of their practice and lives. It is no surprise that the two regard their parents as the biggest mentors in their lives.

In addition to their parents, the two list Brian Panish and Gary Dordick as two of their legal mentors. The brothers are still good friends with Dordick and often seek each other’s counsel and even try cases together. Panish is a well-known trial attorney in the area practicing in personal injury, wrongful death, mass tort and product liability cases. They admire the services and knowledge Panish offers and delivers to his clients throughout the area.

Coming from a small suburb of Pittsburgh, the Simon brothers always remember where they came from emphasizing that in their experience of essentially “coming from nothing,” they’re passionate about giving back to the local communities.

On giving back to the community, the brothers revisit some of the best advice they received, which happened to come from their father, “Big Bob.”

“Be true to yourself,” Brad says. “He also implored us to be nice to everyone and to be humble, both in victory and defeat.”

That advice is something they pass on to future generations of attorneys on finding success within the legal industry.

“It’s also important to never be satisfied,” Robert adds. “In doing so, you can develop a strong work ethic and consistently be over-prepared. Don’t be afraid to invest in yourself.”

“Wayne Gretzky once said, ‘You miss 100 percent of the shots you never take,’” Brad says. “Don’t try to be someone else. I think attorneys try to mold themselves into a field that might pigeon hole them in positions they aren’t passionate about or burn out on.”

Life on the Beach

Aside from the business side of things, the Simon family likes to keep things rather casual. While the brothers much prefer sporting shorts, t-shirts and ball caps, the family also enjoys having an office in close proximity to the beach where the two brothers take breaks to catch some waves in between meetings. The two also don’t mind having mom around who still makes breakfast for the boys when visiting the Hermosa Beach and Seal Beach offices.

“Working with the family is great,” Brad laughs.

“Finding a balance is kind of easy for us because not only do we get to work with our family, but work is our personal life,” Robert adds.

Other ways they find relaxation is spending time with their own wives and children. Brad, a father of two, Kane and Kaia, says that his hobbies are whatever his children’s are, which as of recent includes trips to Disneyland and watching “How to Train Your Dragon” 12-15 times a day. Brad’s wife, Jamie, is also an attorney, but has chosen to focus her time on being with and teaching the children echoing the sentiment of family first.

“I don’t have a social life, per se,” Brad says. “Basically, I work until 3 p.m. I come home and play with the kids until they go to bed.”

Robert enjoys taking vacations with his wife, Christine, a fitness celebrity. He also says she’s very entrepreneurial and loves helping her with the fitness business. Both brothers are Pittsburgh sports fans and enjoy getting together with the family to cheer them on.

Outside of the legal realm of ambitions, the two brothers have vivid imaginations of what they envision their dream lives to be like.

“I’d like to build the Simon Compound, which would consist of houses surrounded by a big wall with a drawbridge and a moat,” Robert says. “There would be a sports bar and pool inside, too, of course.”

“I would like to open a comic book store,” Brad says. This doesn’t come as a shock with the legacy he left behind at his alma mater as the political cartoonist for the school’s newspaper, The Hatchet. Brad also notes that he has a giant Hulk statue in the office, as well as an Iron Man coming out of the wall in the bathroom.

The brother’s creativity doesn’t stop there. In 2007, Robert participated in “Are You Smarter Than a 5th Grader?” and won. Brad also competed and won the game show, “Trivial Pursuit.” The two also wrote a science fiction novel together in 2013 titled, “A Wonderful World: The End of Times,” which delves into the futuristic world and addresses the topics of human lifespan expansion, artificial intelligence and religion. Both brothers said they received surprised reactions from the book, but loved every second of writing it and the outcome.