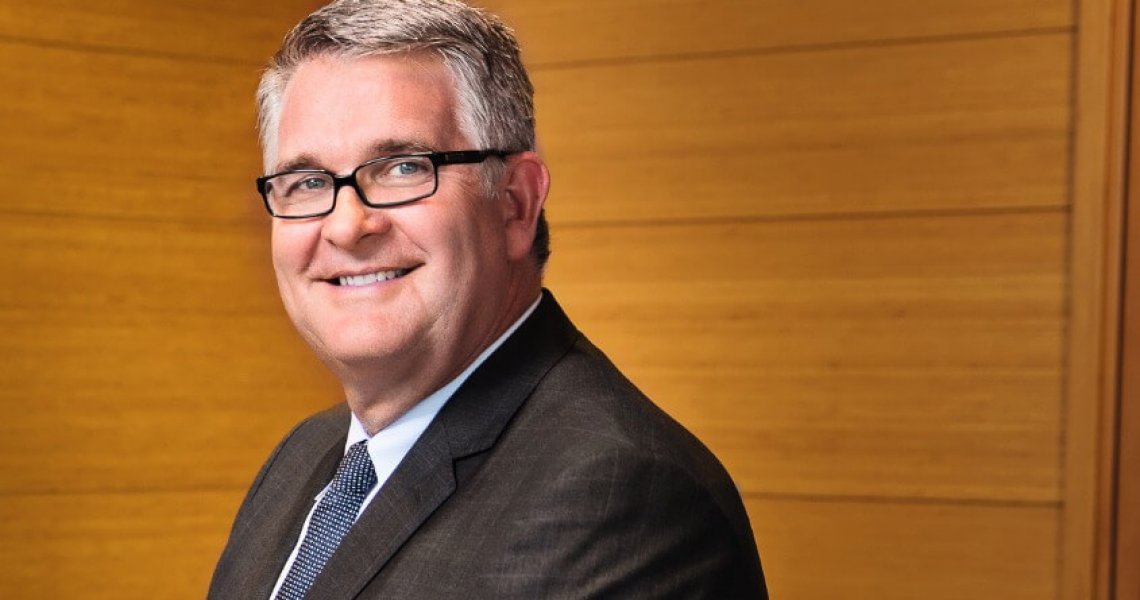 “I enjoy the excitement of a live performance, whether it be on an athletic field or in the courtroom,” says Tom Walsh, a partner in the Dallas office of Winston & Strawn LLP. In addition to his list of satisfied clients as a lawyer, Walsh has created a captive audience with a fan base built over two decades of plying his craft as a sports broadcaster. He has served as the radio play-byplay voice for Jesuit College Preparatory School football games for the past 20 seasons, and he has appeared on television on the AXS network (formerly HDNet) as a color commentator for major college basketball games for more than a decade. For the past six years, Walsh called the prestigious Battle 4 Atlantis college basketball tournament over the Thanksgiving holidays with well-known basketball commentators Kenny Rice and Seth Davis. The trio have called games together involving basketball powerhouses such as Wisconsin, Duke, Kansas, Florida, Villanova, North Carolina, UCLA, Georgetown, and Michigan State.

As a trial lawyer, Walsh’s practice is national in scope. He has handled cases in jurisdictions throughout the United States, including California, Colorado, Texas, Oklahoma, Alabama, Florida, Delaware, and New York. He has also traveled extensively as a sports broadcaster for both radio and television and has broadcast sporting events in places such as Los Angeles, Salt Lake City, Dallas, Houston, Kansas City, Indianapolis, Atlantic City, and Dublin, Ireland.

A COMMITMENT TO PREPARATION

Walsh says the two fields of litigation and sports broadcasting complement each other. “To be a good trial lawyer or a good sports broadcaster you have to have more than a good voice. There’s substantial preparation. But in addition to preparation, you have to be ready to react to the unexpected, and that means thinking quickly on your feet.”

He believes his commitment to total preparation for the upcoming legal proceeding or game gives him an edge in each arena. “When you’re a trial lawyer or a sports broadcaster, nothing is ever going to go according to the script. And that’s why I think preparation is so important. Because if you’re prepared, no matter what unexpected occurs, if you know the record and the case cold, if you know the information about the teams cold, you can adapt, you can pivot, and you can take the unexpected and make it a positive.”

The parallels between the two endeavors are closer than many people might think, even if the stakes are very different. He says, “You’ve got to be able to communicate persuasively, and you must sound knowledgeable. To sound knowledgeable, you have to actually be knowledgeable. When you are on television, people are not just listening to you, they are also watching you. You need to look calm and composed. When you are in court, you want to project to the jury the image that you’re in control, that you know what you’re doing, and that your client is on the right side of the case. There are a lot of parallels.”

A PASSION FOR THE LAW

Walsh was preparing for a career in business or in sports broadcasting at Southern Methodist University in Dallas when his mother made a life-changing phone call. “You know, you ought to consider being a lawyer. You love to talk. You like to argue. You’re quite effective and people like you,” she said.

He walked into the office of his academic adviser and changed his major that day.

Walsh says getting into the University of Texas School of Law was a “home run” for his career path. “At that point I knew I was going to be a lawyer. I still loved sports broadcasting and knew it was going to be a big part of my life, but my calling and my passion was for the law. And once I decided on becoming an attorney, I knew that I wanted to be a trial lawyer. My dad is both a lawyer and a successful motivational speaker, and I learned a lot from him about the art of public speaking.”

As a first-year law student at UT Law, Walsh met two young lawyers who have had a big impact on his life – Tom Melsheimer and Steve Stodghill. “I have learned so much from both of them. Tom Melsheimer is a nationally-acclaimed trial lawyer, and Steve Stodghill is one of the absolute best case strategists and masterful business developers I have ever known. I am very lucky to have worked with both of them for much of my legal career.”

Walsh says, “I really love being a lawyer. As with any job, there are times when matters are extremely stressful. There is a lot to get done in an incredibly short amount of time. But you always get it done. If that means you lose a lot of sleep in order to make sure that your client is getting the top-notch service they deserve, so be it. The client’s interests always come first.”

Doing something he loves and having a passion for trial law are what get Walsh through the toughest days. “I like matching wits with other outstanding lawyers. In my 25 years of practicing law, I have learned a lot from my opposing counsels. As a trial lawyer, I’ve got somebody on the other side of a case who is trying to come up with strategies to counter the strategies we’re coming up with. That’s exciting to me because I’m matching wits and strategies with other very smart and capable lawyers, as each side is trying to get the case in the best position so our respective clients can prevail.”

His philosophy is basic – he believes his clients’ problems are his problems. It’s a way of conducting business that is as rewarding as it is challenging. “I love the satisfaction of knowing that I’ve done a good job for people who need my expertise. I love the satisfaction of doing my job to the utmost of my ability, and to achieving success for people who have put their trust in me on cases that mean a lot to them,” he says.

Walsh and his wife, Tara, have been married 16 years. They have two daughters. His daughters are active in sports and Walsh has been their basketball coach their entire lives. He knows that none of his success in law or in sports broadcasting is possible without the support of his wife and his daughters.

“There is a lot of sacrifice and time away from my family at times so that I can practice law at the highest level and so that I can pursue my passion of sports broadcasting. Nothing I do would be possible without the unwavering love and support of my wife and my daughters.”

Walsh is also an active member of Prince of Peace Catholic Church in Plano, Texas where he serves as a lector. At Prince of Peace Catholic School, he serves as a member of the school’s athletic advisory council and previously served on the school advisory council. He is also very involved at Jesuit College Prep as the Master of Ceremonies for the Jesuit Sports Hall of Fame Banquet, and he volunteers his time at Ursuline Academy.

Whether in the law, the broadcasting booth, or in life, Walsh believes thorough preparation is the key to long-term success. “I pride myself on the fact that nobody is going to be more prepared than me,” Walsh says. “When the hours get long, and sleep gets scarce, I often say to myself, ‘Nobody is going to outperform me. No one on the other side is going to out-prepare me.’ I use that phrase so much it’s almost my mantra.”