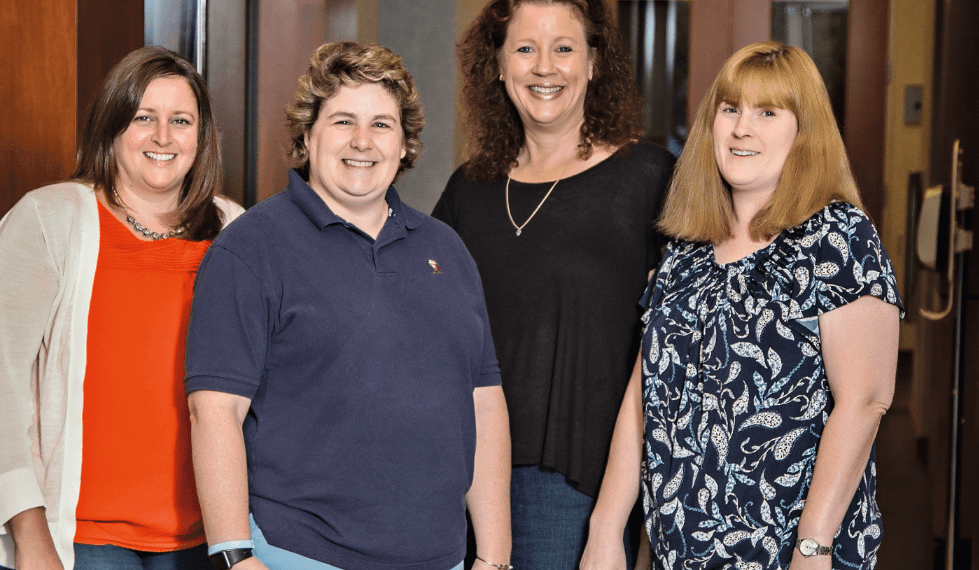 “In addition to being snarky, I am straightforward and frank and direct, which is a style that doesn’t work for every potential client. I think it’s important for me to give them reality-based solutions based on my experience and their individual facts. It’s not my job to give them false expectations and false hopes,” said Bradley.

Bradley launched Triangle Smart Divorce in early January 2017 after 11 years as a divorce attorney at Cheshire Parker Schneider & Bryan in Raleigh. A native of Maryville, Tennessee, she graduated from Emory and Henry College in Emory, Virginia, with a Bachelor of Science in psychology.

Bradley’s interest in family law was sparked at UNC School of Law where she earned her Juris Doctor.

Jenny Bradley launched Triangle Smart Divorce in her own image. The environment at the four-person firm is laid back and collegial.

“You have to have a sense of humor to work with me. We’re usually playing ’80s music and singing,” said Bradley who is wearing Carolina Blue pants, a golf shirt with a Grumpy insignia and tennis shoes.

“Tennis shoes are much more sensible and practical. That’s me, comfortable,” she said, quickly adding that her preference is also due to an ankle injury.

“I was running sprints at Crossfit after doing nothing for a while,” she added. “Pedal to the metal. When I do something, I go all in.”

Bradley was very deliberate in the name she selected for the firm – Triangle Smart Divorce. “Our tagline is we keep smart people from screwing up their divorces.”

“Smart people realize that even though emotions are involved, we’re trying to figure out how to disentangle two people’s finances such that they can have a secure life moving forward. The future may not be what two people in one household could do but we are trying to put together the best resolution of the assets and the debts and the income and the cash flow that we can,” explained Bradley.

“Smart people have gotten to the point where they are realize they own the issue and have some accountability in the end of the marriage too. At the risk of sounding trite, to be a part of the solution, you’ve got to see you are part of the problem. Your marriage didn’t get to where you are mystically.”

“The very dumbest thing people do is fight over principle, and they are willing to spend away their futures or their children’s futures to fight about something that 10 years from now nobody’s going to care about,” said Bradley.

“I think one of the dumbest things people do is decide one day they’ve had enough and take off without consulting with a financial planner, a lawyer and a psychologist about things that could be problematic down the road.

Bradley is a certified mediator. While her cases typically resolve before mediation, it’s the underpinning of her strategy, to tamp down the emotions, move toward resolution, and keep the matter out of court by using a process-oriented approach.

“The basic process involved is a lot of information gathering and checklists,” Bradley continued. “Then we put everything into a spreadsheet that calculates and auto tabulates things like assets, debts, alimony and child support so as we make adjustments, it gives us a frame of reference. We also give them homework to move them past the raw emotional state and give them something to focus on and move them forward.”

“This works well for my clients who work in tech or a craft sman who builds decks and understand you’ve got to think through worst cases and what might happen if I do that, that or that, to pick the best alternative.” Bradley and her team of four work alongside their clients in gathering and assimilating this information and introduce the concept of the Team early in the process. “I love the concept of a team. Every person has a set of particular skills and a scope of knowledge base. We need each others’ unique perspectives to solve difficult problems and see beyond our blind spots.”

BIKING AND THE DALAI LAMA

The firm’s very first newsletter started with this quote from the Dalai Lama. “When you talk you are only repeating what you already know. But if you listen, you may learn something new.”

Bradley explained, “I came across that quote and it spoke to me. I thought, that’s it in divorce law, that’s it in marriage, that’s it when I serve as a mediator. Shut up and listen.”

“I love the collegiality and the competition,” said Bradley.

Bradley is an avid bike rider. She is former captain of the Selma Cyclepaths, a Bike MS team that was inducted into the Circle of Distinction by the National MS Society for raising over $1 million. She also sponsored the Tammy Lynn Foundation Rock N Ride which helps children and adults with developmental disabilities.
When not injured, Bradley rides her trail bike in Umstead Park and on the American Tobacco Trail. She rides her road bike in Johnston County, “where I encounter more dogs than I encounter vehicles.”

“Being on my bike keeps me from punching people in the nose, so it’s a good stress relief. I sleep better. It gives me more clarity … when I’m on my bike it gives me a couple of hours when my head is not in my computer or in my phone. Like the Dalai Lama quote, ‘When things are shutting up and I can just listen.’”