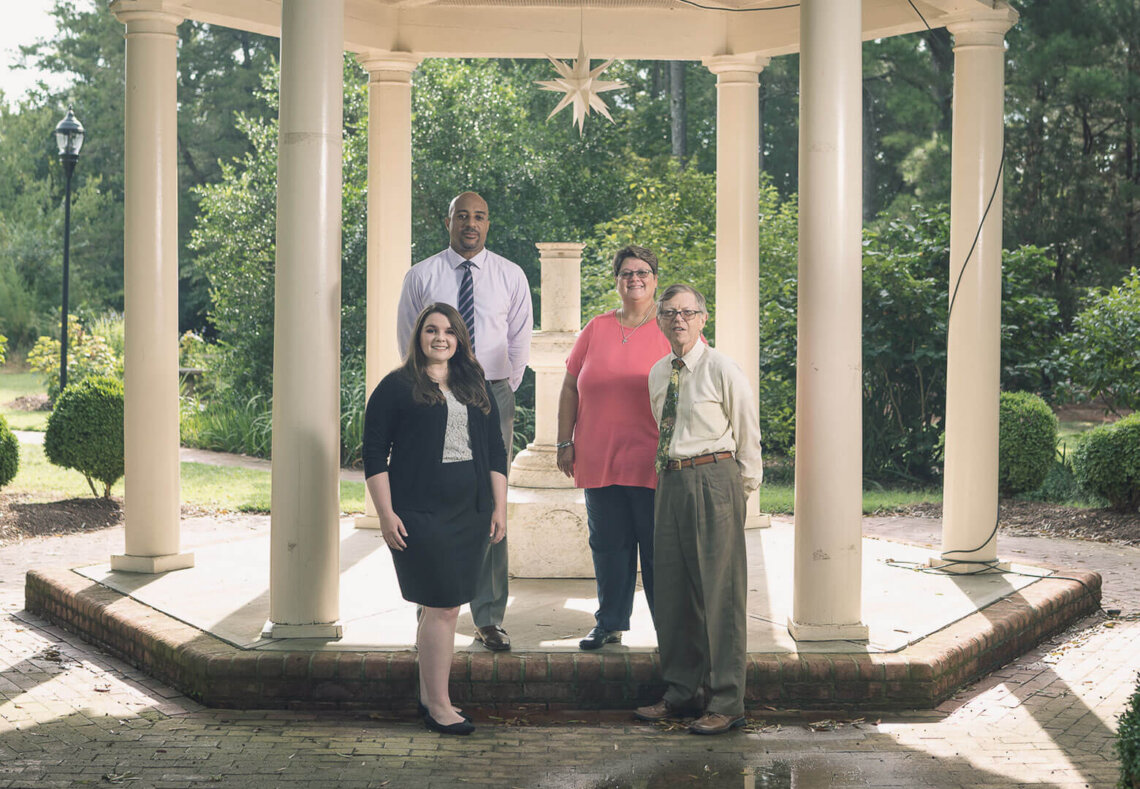 James Warren’s frog print tie dangled below his belt as he leaned forward from his chair to chit chat with a woman and her daughter in the lobby of his Wake Forest law office.

With its traditional furniture and art by local artists, the 45-year-old law firm’s lobby has a casual, professional and homey atmosphere.

“It is very common to walk into our office and hear clients talking to James or other staff members and saying, ‘remember when this or that happened in Wake Forest?’” said partner Keith Shackleford. “I think that whole sense of community and history helps us maintain a closeness with our clients that, in a digital age, is very easy to lose.”

James Warren is soft-spoken, unassuming and frugal with his words, but he has a mammoth shadow. Our photo shoot took place outside the Wake Forest Historical Museum. Warren was instrumental in raising $2,000,000 for it. He assisted the Boys & Girls Club in securing a location in Wake Forest and was among the local businessmen who funded the athletic field at W.E.B. DuBois Middle School.

Warren has chaired the Trentini Foundation, served on many committees at Wake Forest Baptist Church and four times has been a Director for the Wake Forest Chamber of Commerce. He was named Citizen of the Year by the Town of Wake Forest in 2006.

Warren was born and raised in Wake Forest. He earned his Bachelor of Arts and Juris Doctorate degrees from Wake Forest University.

Warren, Shackleford & Thomas is a full-service law firm with a heavy emphasis on residential real estate, estate planning and probate administration. Additional practice areas include business and corporate law, civil litigation, personal injury and family law. The firm was formed in January 1973 when John Rich opened an office in Wake Forest. Warren graduated from law school in June 1974 and began working with Rich in September of that year.

Wake Forest is something of an anomaly. While it is a bedroom community for Raleigh, the locals are fiercely dedicated to the preservation of a community unto itself.

The firm has built its practice base through the years by being heavily involved with the local community, not as a marketing strategy but as a life’s mission. “We’ve been very fortunate to have active people here who wanted to do a lot of good things, and maybe that’s because we had a college here once upon a time and so many well-educated people that were leaders,” said Warren.

“I think it’s important that this town have its own focus, on our own government and especially on our downtown,” said Warren. “Raleigh would love to annex Wake Forest and the name Wake Forest go away, but people here like being part of a smaller, closely-knit community.”

The firm’s three partners are bound by similar ties. All are from the area and earned their J.D.s at the School of Law at Wake Forest.

“We’ve got roots here,” said Shackleford, “We’re working with clients who are second and third generations in some family businesses. We see these clients on Saturday night in restaurants and sit in worship service with some on Sunday. Residents who are new to Wake Forest and come in for our services almost without exception, come from a local referral.”

Wake Forest has turned into a boom town. Over the last 30 years, its population has grown from 5,000 to over 45,000 people. The biggest impact has been on the residential real estate market.

The demand for housing is spawning subdivisions. “We are assisting developers in creating the basic subdivision documents, whether that is drafting the covenants, reviewing or creating easements or simply searching title to confirm what land is actually available,” said partner Kim Thomas.

“Sometimes that means families are selling the farm that has been in a family for decades but which now sits dormant because the grandchildren, who inherited it all, work in different industries and have no idea how to take care of a farm,” said Thomas.

“When we work with individuals buying homes, we often assist with drafting their contract if they choose to be unrepresented by an agent,” said Thomas. “We advise them on the process from start to finish so they are confident in their decisions.”

The firm is a resource for developers of retail, commercial and residential projects. “We generally know what new restaurant or retailer is opening or can tell you about the new multi-use property being built at Elm Avenue and S. White Street,” said Shackleford. “Obviously, most clients are focused on their own business when they come in, but if they ask, ‘hey, what’s going on there,’ we can almost always give them the details. I think that allows clients to see us not just as their attorneys, but they know they are working with people who are invested in the community where they live.”

“As a general practice firm, we are able to assist clients in most of the areas where they will need legal assistance during their lives,” said Thomas.

Underscoring the firm’s civic commitment, photos of Tommy Byrne cover the walls in one of three conference rooms dedicated to hometown heroes.

“Tommy Byrne was a well-known baseball player who played on four World Series Championship teams with the New York Yankees,” said Warren. “However, it was his two terms as Mayor that really helped our community. He obtained grants to provide paved roads and utilities for the northern end of Wake Forest, greatly improving the standard of life for families that had lived there for generations.”

It is obvious that the members of this 45-year-old law firm also have helped to improve the standard of life for residents of the community.