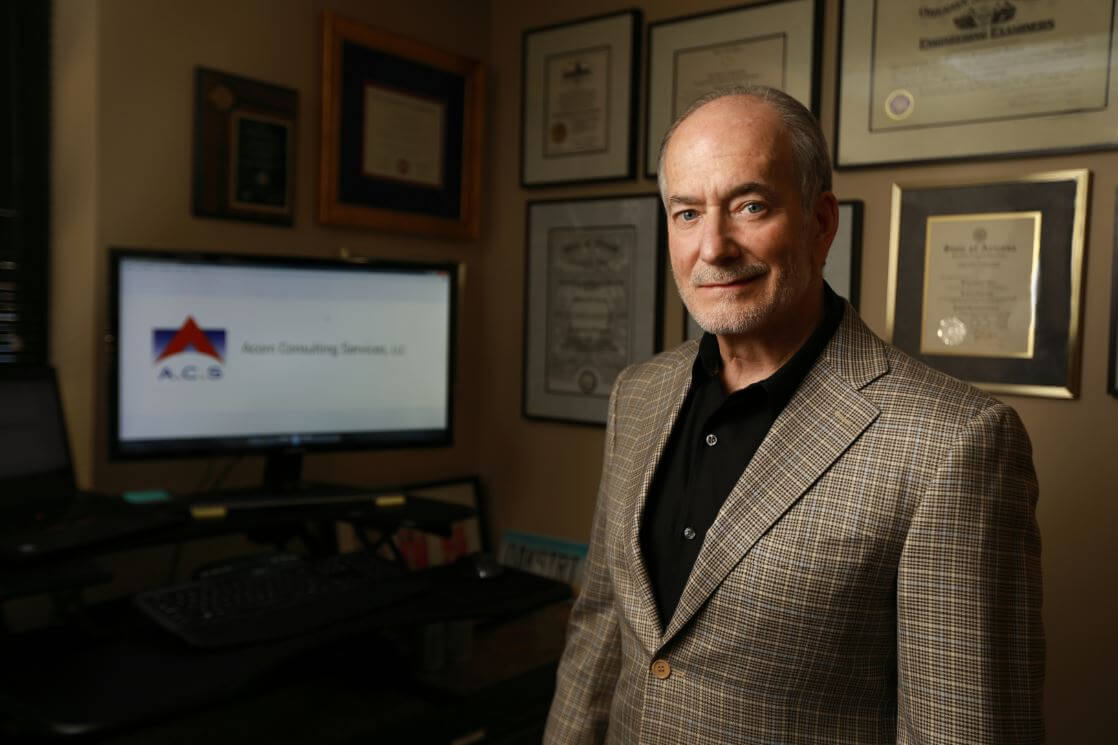 Founder and principal engineer of Acorn Consulting Services LLC, William “Bill” Acorn is something of a legend. Within the complex and multifaceted world of mechanical engineering, Acorn’s “star quality” was evident from a young age. Naturally, this attracted the attention of some of the largest and most influential minds in the industry. Of particular note, was his apparent fascination and talent for forensic engineering.

Wholly enthralled with his work – both the practical application and extensive research/discovery aspects – Acorn quietly eschews such accolades. For him, the “prize” is his work. And, even after 40 years, he remains as enthusiastically engaged and driven to discover what’s over the next “mountain.”

As is true of most individuals gifted in the sciences, Acorn is both pragmatic and disciplined. His work necessitates precision and a logical, even mathematical mind. And yet, the decisions he made (and at a very young age) that would eventually lead to his position today, securely and skillfully at the helm of this multidisciplinary design firm, required the courage and audacious daring commensurate of a high-stakes gambler.

“I started off as a student engineer running a program known as the Engineering Experiment Station at the University of Arizona,” he says. “It got me into this whole area of air distribution with numerous opportunities to conduct research. This led to my interest in the HVAC side.”

His impressive work coupled with an uncommon maturity, did not go unnoticed. Immediately upon graduation Texaco snapped him up. Given the title power engineer, Acorn was assigned to an oil refinery in California.

It was an incredible “first job” for a new graduate, and yet after a little more than a year Acorn was feeling boxed-in and made his first “risky” decision. “I leftthere because I didn’t want to get stuck in a corporate environment. I realized some of engineers were doing the same thing as me, but they had already been there 10 years.”

Fate (and a college professor) stepped in. “He said he knew of a small consulting firm that could use someone like me, would I be interested,” explains Acorn. Ever the conscientious employee, he drove to Tucson for the interview over a holiday weekend.

“I took a hit in pay,” he says with a wry smile, “plus my hours went from 40 a week to about 60. But it was a great opportunity, we worked on a variety of projects for a diversity of clients.”

Acorn was given a lot of responsibility early on. “It taught me to be careful and thoughtful,” he says. “Really, it was the foundation of the practice I’ve had since then. It was also the source of the first forensic project I ever did.”

That complex project happened to be for the United States Air Force. Already a recognized wunderkind-turned-phenomenon, still in his early 20s Acorn was already solving problems that baffled the Corps of Engineers. His future was seemingly crystalizing right before his eyes.

“I found it fascinating to go back and try to figure out what ‘went wrong,’ and was successful at that,” he says modestly. Actually, his success was so profound that he was soon handpicked by another engineering firm, where at the ripe old age of 28, he was asked to create, manage and run a mechanical/ electrical engineering department.

“Here I was suddenly responsible for hiring and firing other engineers and building a department from just the initial two of us to 25 in just two years,” says Acorn. “That’s when I started working on high-tech projects, including those for the semiconductor industry.”

At an age when most young men are just breaking in to their chosen vocation, Acorn already possessed the knowledge, experience and confidence of someone twice his age. Of course, as he sardonically puts it: “I started out small naturally, my first client was a little-known company called IBM.”

Never one to waste time or opportunities, Acorn then the father of three small children, “balanced” these already monumental responsibilities, by teaching part-time at his alma mater.

“My hair was on fire,” he says with a good-natured laugh. “It was definitely trial by fire, but I was building a career and enthralled with my work.”

So enthralled, that Acorn found himself at another crossroad, although it had to feel more like a 100-foot plunge from a rocky cliff. “I decided that if I could build this department for somebody else, I could do it for myself. So, crazy as it sounds, at 31 I started my own consulting practice.”

It did indeed have the exposure, risk and even danger similar to taking the first step off that metaphoric ledge. “I was by myself, no backing,” he says, “just contacts that I’d made along the way. My goal was to serve clients with laboratories, hospitals, semiconductor facilities, clean rooms and so on. I did a lot of work for the Department of Defense, Army Corps of Engineers, Universities and similar clients, usually on the more complicated projects.”

Over the ensuing 19 years that Acorn had that business, he built it from just himself to over 50 employees recognized as one of the leading national companies geared with a focus on semiconductor and high-tech projects.

But then, Acorn is impressively unique in many ways, not the least being his advanced and extensive knowledge.

A professional engineer licensed in Arizona, California, Colorado, Illinois, Iowa, New Hampshire, New Mexico, Nevada, Oregon, Texas, Utah and Washington, he serves clients across the United States and internationally. In addition to his degree in mechanical engineering from the University of Arizona where he graduated with distinction, Acorn remains versant in his ever-changing field, continuously honing his skills by attending a wide range of technical and managerial seminars and workshops to update his technical expertise.

In addition to his advanced education, perhaps what’s most distinctive about this mechanical engineer, is his comprehensive expertise in the highly specialized area of forensic engineering. In fact, he is a board certified diplomate in forensic engineering, granted by NAFE, and an ASHRAE fellow.

Over his 40-plus year career, Acorn has become the acknowledged expert in assessing, evaluating, remediating and providing testimony on complex project design, construction and operational matters. Furthermore, his consulting expertise has significantly influenced the shaping approaches to code compliance and life safety in semiconductor and similar advanced technology facilities.

Today, Acorn is considered the go-to expert witness for the country’s most successful attorneys. Considered “the ideal witness” Acorn embodies not only the knowledge, experience and expertise, but has the enviable ability to relay this information in a concise, clear and simplified manner that judges, juries and the general public can relate to.

Additionally, Acorn has generously shared his vast knowledge in various ways including authoring a book on “Code Compliance for Advanced Technology Facilities,” several technical papers and teaches and conducts seminars at several of the nation’s finest higher educational facilities.

A man of innumerable talents, Acorn continues to thrive on his passion for the work he seems to have been born to do.