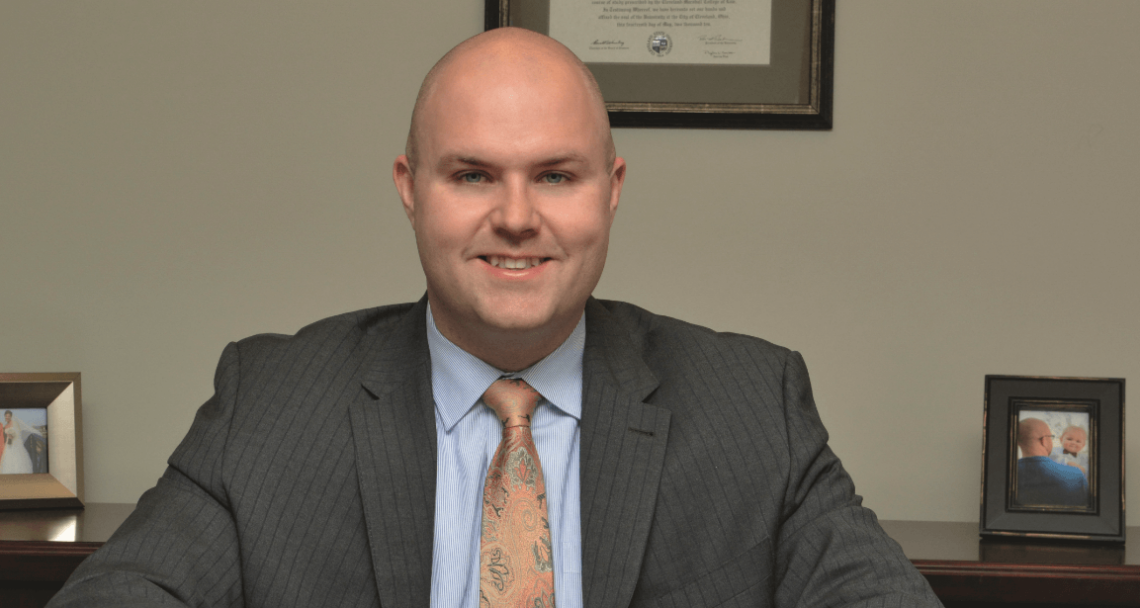 “It characterizes where I came from as well as how, as a plaintiti’s attorney I face the Goliath’s of industry,” he explains. “I’m always going up against large corporations and billion-dollar insurance companies with very deep pockets.”

Tittle’s passion for the law comes from a profound belief in justice, while his compassion and determination to fight for justice is rooted in his earliest life experiences.

“There were personal problems with my biological parents,” he says, “so I was basically dropped on the doorstep of my great-aunt and uncle when I was two weeks old. I was so very lucky to have them and will always be grateful they were willing to step-in and assume that role. They were good, honest, working-class people; my uncle a union worker. They taught me old-fashioned values and to respect others.”

“Naturally, I was the trial attorney,” he recalls with a chuckle. “That was it. I was bitten by the bug and couldn’t think of becoming anything else from that point on.”

Two of his close friends had fathers who were attorneys and Tittle was enthralled, observing their day-to-day activities. “One of my friend’s dad was actually judge of our small town of Huron,” he says, “and there would be times when he would let me sit on the bench.”

During his undergraduate years he again participated in mock trials; although, on a much higher and more competitive level.

“I was so focused on being an attorney that I joined the Bowling Green Mock Trial Team,” says Tittle. “We traveled as far east as Harvard and Yale and as far west as Arizona State. It was a great experience.”

When it came to choosing a law school, Tittle already had a game plan. He had decided that he wanted to practice in Cleveland, so it made sense to attend Cleveland-Marshall. There he stood out so much scholastically, that after only his first year he was invited to interview with all of the major law firms.

“It didn’t take long for me to realize that I really didn’t like the whole big firm persona,” he says. “So, I marched into the career planning offices on campus and said, ‘I want to work for lawyers that help people.’ They directed me to some preeminent personal injury and medical malpractice firms, and I ended up clerking for one of them.”

That’s how Tittle discovered the niche that was right for him. “I felt that was the practice area where I could make the biggest impact on people’s lives,” he says. “The cases that I handle are those where they’ve lost a loved one; they come to me in their greatest time of need. I derive tremendous satisfaction in being able to help them through a very challenging time and hopefully, help them get back to where they can live a meaningful life.”

Hanging Out The Shingle

Hired immediately upon earning his Juris Doctor, Tittle worked for the next five years for two top notch Cleveland personal injury law firms where, luckily, he was able to gain experience immediately, “I took my first deposition the week I got sworn in by the Supreme Court. Not many other lawyers were fortunate enough to get that immediate experience out of school,” Tittle recalls. Tittle, however, always knew it was a matter of time before he went out on his own. “My dream was always to start my own law firm and did so as soon as I felt I was able.” He was joined by partner Scott Perlmuter shortly thereafter, and the two began building their firm.

“My vision was to become a premier plaintitis firm, not just in Cleveland but throughout northeast Ohio,” says Tittle. “A few months after opening my initial office, I opened a satellite office and the goal has been to keep expanding. We don’t want to be just your everyday law firm, but something special. I believe in the saying, ‘if you’re not growing you’re dying,’ so I’ve really taken that to heart through the hires of employees as well as opening additional offices.”

“We concentrate our practice on lifechanging, catastrophic personal injuries,” says Tittle. “The types of injuries we focus on include, but are not limited to, wrongful deaths, severe brain injuries, paralysis and other spinal cord injuries. We represent individuals who have suffered injuries in various circumstances such as car, bus, truck and bike accidents as well as medical malpractice incidents.”

According to Tittle, one of the things that sets his firm apart from many other personal injury and medical malpractice firms is the fact that they actually try cases.

“I became a lawyer for two reasons – to help people and to try cases, not settle,” he says. “Unfortunately, many attorneys out there just try to ‘turn and burn’ and make a buck. We enjoy trying cases. Naturally, we’ll settle when that’s in the best interest of our client, but we’re ready to go to bat for them.”

Just as he shined in college and law school, Tittle’s hard work and dedication has earned him countless awards and recognition. His tenacious advocacy has resulted in compensation for his clients totaling millions of dollars. His name has been repeatedly listed among theft Super Lawyers Rising Star in the areas of personal injury and medical malpractice, an honor bestowed upon only the top 2.5 percent of lawyers 40 years old and younger. Tittle has also been selected to The National Trial Lawyers Top 40 under 40 list, and Top 10 under 40 list by the National Academy of Personal Injury Attorneys. Between these accolades and their success rate, Tittle & Perlmuter has earned a stellar reputation within the legal community, resulting in 90 percent of their business coming from referrals from other lawyers.

“We are very proud and respectful of that,” says Tittle. “That’s something that I think is rather special because that’s other people in my profession trusting me to handle their clients. I’d like to continue to expand on that and keep earning their trust.

Though it might sound cliché, ultimately Tittle has remained true to his original reason for becoming an injury attorney, and that is to help people.

“Personal injury attorneys should do more than just handle the legal issues,” says Tittle. “For example, we frequently help our clients injured in a car accident make claims for medical payment coverage and deal with their auto insurers to get vehicles repaired or replaced as quickly as possible without charging an additional fee.

In addition to fighting for justice for his clients, Tittle is also invested in his community. Serving on the board of directors for Teen Leadership Corps since 2011, he actively supports this youth-led service organization designed to build character and discipline.He has served as a coach for his hometown Huron High School football team until recently when the birth of his own son curtailed his free time.

One of the most notable community services is a scholarship offered by the firm. The Distracted Driving Awareness Scholarship not only promotes driver safety, particularly among teens, but provides first and second place winners with financial assistance for college.

Tittle, who was a former athlete and weekend warrior, says he enjoys fishing, sports in general, politics, and lifting weights. However, since the arrival of his 18-month-old son, Broderick, he and his wife, Molly, find themselves spending more time closer to home enjoying their son and family dog Max.

“I love being a dad,” he says, “but I’m still figuring out how to balance family time with work. I think it’s an ongoing learning process, and something I battle with each day.”

As far as the future, Tittle says he plans to stay the course. “I’ll stick with my original vision and build on that one client at a time,” he says. “We’ll continue to expand and keep earning the trust of our colleagues.”