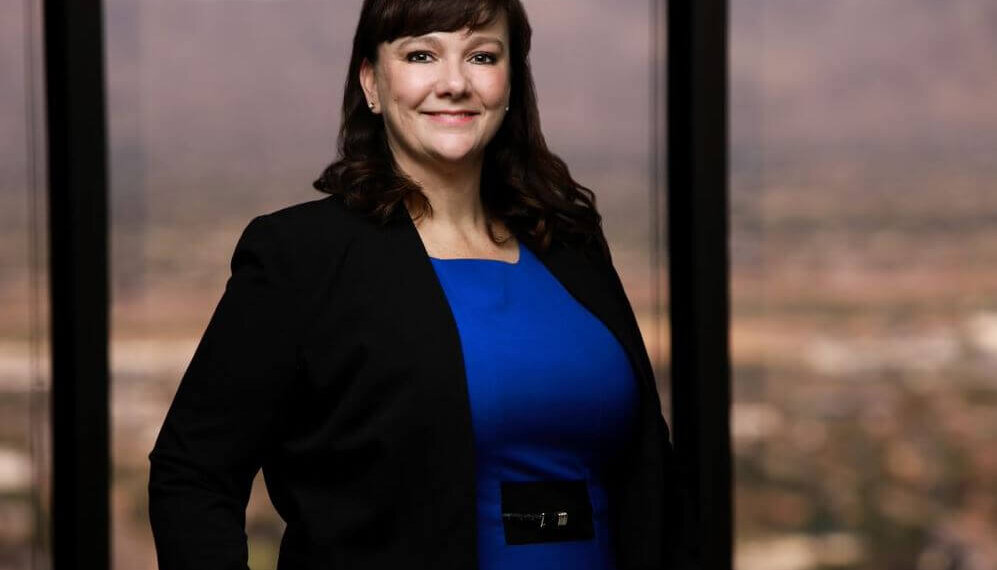 Brandi Blair: From Observer to Advocate

Adrenaline is adrenaline. Whether your aircraft’s electronics have just alerted you to a missile lock or you’re about to step into a courtroom, the moment is exhilarating. You have to face such moments with confidence in your ability to achieve a successful resolution to the challenge,” says Brandi Blair, attorney at Jones, Skelton & Hochuli.

A U.S. Army veteran, Blair would know. She flew as the Technical Observer on the 0V-1 Mohawk, a fixed-wing and unpressurized “little spy plane” while serving in Arizona, Georgia, and for 18 months flying surveillance over the Korean demilitarized zone.

Blair planned on a life-long military career – becoming an attorney was “not on her radar.” She joined the Army the day after her 17th birthday. But when her aircraft was retired and she was reassigned, she decided to go to college, then return to the military after earning her degree. The decision to pursue a career in the law came during those college years.

She had preliminary acceptance into JAG during law school, but an important change occurred between her second and third year of law school. Blair was awarded a summer clerkship at Jones, Skelton & Hochuli and found the work as challenging and exciting as the military. “Every day, there was a new legal puzzle. I was using different parts of my brain to solve complicated problems. It was difficult. And it was all happening in this incredibly collegial environment. I fell in love with the people and the firm. More importantly, I was fortunate to get to work with Ed Hochuli, who supported me and promoted my strengths. It was a challenging and exciting time. At the end of the summer, JSH offered me a job after graduation. It was difficult to consider leaving the military for the first time in my life. I had never considered a future out of uniform. In the end, I decided to change direction and embark on a new adventure,” she says.

Blair’s personal philosophy is based on something she learned in the military – internal fortitude. The first time she heard that phrase was from a drill sergeant during basic training. His lecture – shouted, she says – stressed that the most successful people are the people who can keep going when it hurts. It doesn’t matter how talented you are, how smart you are, or how experienced you are, if you quit you fail. That message stayed with her through basic training, her military career, and today it guides her legal career.

She says, “It’s very easy to celebrate all the highs, particularly in this career. That’s not what really makes you successful. You have to get up when you’re knocked down and stand up and be strong during those times. That’s what I really focus on. Success isn’t about shining while it is easy. It is about enduring when it is not easy.”

Another lesson learned during her military career was the value of combining leadership with teamwork. For Blair, the two concepts are not mutually exclusive. A true leader recognizes that the success of the mission or the case depends on knowing the strengths and weaknesses of the team members, and how to apply or compensate for them. Sometimes a person needs to take a subordinate role, and at other times step up and assume leadership. She says, “Those things change depending on the particular mission or the particular case. If you can recognize that, you’ll find yourself increasingly in a position of leadership. You progress.”

Blair says military training builds confidence within the individual, and that confidence is felt and appreciated by her clients. “You have to do a lot of things that are incredibly uncomfortable, but the end result is that you become confident in yourself. Today, that training serves me and my clients well. I know that I’m not going to die if the judge is disagrees with me, or is unhappy with my position. That training taught me how to keep my head up and not lose confidence, and if I do, I don’t show it,” she says.

She says her “edge” over the competition is an ability to assess people and situations quickly – skills directly related to her military experience. Those skills allow her to deftly change tactics when legal situations unexpectedly change, or new personalities are introduced. “Understanding what people need, and being flexible enough to address those needs, is key to providing excellent customer service.”

Blair represents clients in a variety of industries, including retail and hospitality, medical and healthcare, legal, accounting, and governmental and quasi-governmental entities. She focuses her practice on general liability defense, including corrections, dram shop, professional negligence and wrongful death.

In her spare time, she enjoys traveling, scuba diving, and being outdoors. Blair is a horse enthusiast and trains and rides in the discipline of dressage. She is also active in a non-profit group called Generation Justice, an organization focused on changing legislation to protect foster kids and ensure they are placed in stable and permanent homes.

Blair believes evolution is the key to being a successful leader and maintaining a successful career. “I credit my military career and legal experience for my personal and professional evolution. If you can’t adapt to any situation, if you can’t set aside your ego and be smart enough to learn from your teammates and from your successes and failures, you’re stagnant. You can’t lead a team in any situation if you’re stagnant. You’re not going to be promoted – anywhere.”