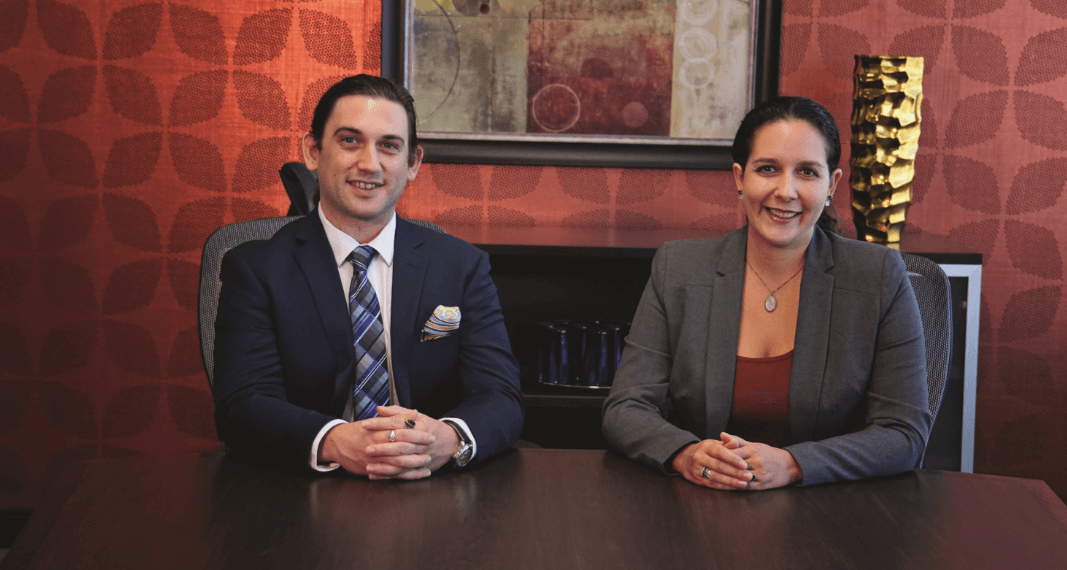 Business partners, especially those who have been together for a while, often liken their relationship to that of a family or marriage. For attorneys, who expend seemingly endless hours and intensive focus launching and building a thriving practice, weathering the inevitable ups and downs and conscientiously cosseting their clients, this connection can seem particularly profound. This is especially true for Leigh Chandler and Aaron Shechet, founders of Chandler & Shechet LLP. For them, forging a new firm together has come with special added benefits.

“I get to spend all day with my favorite person in the world,” says Chandler.

The two exchange a look and a smile that conveys an intimacy that goes beyond the typical partner relationship.

“We met in law school,” Shechet says, “and, realizing we both had the same vision, opened our practice as soon as we graduated. We have been together for about 11 years, and married for the last four.”

“Actually, we’re not exactly sure just how long we’ve been married,” Chandler chimes in. “We got married during Happy Hour at a bar so ….”

They laugh at this unlikely, whimsical depiction of their nuptials. It’s just one example of how perfectly suited they are for one another. They are all business when it comes to their practice and clients, but very laid-back and full of laughter in their private lives.

Like pieces from a jigsaw puzzle, this girl from Massachusetts and a California native, fit together perfectly both professionally and personally. Each has his or her own strengths that complement the other’s, and despite coming from very different backgrounds, share the same goals, work ethic and approach to life.

Chandler was raised on a Christmas tree farm in Berlin, Massachusetts. “It was a beautiful place to grow up,” she says. “I got to do all the artsy things, decorating Christmas trees and making wreaths.”

She admits there was no driving passion that led her to law school, but rather the combination of building on her English degree with the right grad program and the excitement of moving to California.

“Pepperdine has this clever trick of sending you their beautiful brochure featuring lots of ocean shots and long, lovely beaches,” she says with a smile. “But seriously, my father advised me that law school would be a solid basis for virtually anything I might want to do, and I was drawn to Pepperdine’s alternative dispute resolution program.”

Shechet earned a bachelor’s degree with honors in economics from UC Santa Barbara before earning his Juris Doctor from Pepperdine University School of Law with a certificate from the Geoffrey H. Palmer Center for Entrepreneurship and the Law, of which he served as an executive board member.

“I’d been considering law school since my first year of high school,” he says. “My plan was to get into business and everyone was saying that law school is a good foundation. I debated between law school and business school, but the majority of advice I received suggested that law school was the better choice. It definitely has turned out to be for me!”

Oddly enough, out of all the law students attending Pepperdine at that time, Chandler and Shechet managed to find one another. They were possibly two of only a small handful of students whose career plans did not include becoming a traditional, practicing attorney.

“Leigh wanted to be a mediator, and I wanted to get into business, so we formed a practice that would let us pursue our passions,” says Shechet. “Our plan was to open a firm that offered transactional work to small businesses along with business consulting services. As our firm evolved, Leigh launched her mediation practice and we transitioned from transactional work to representing businesses in court.”

While their wedding may have been a bit impromptu, launching Chandler & Shechet involved a great deal more strategizing and planning. They began by carefully analyzing their strengths and interests, ultimately opening their doors with the announcement that they offered standard representation and litigation services along with counseling for business upstarts.

Serendipitously, one of their first clients offered myriad opportunities for the young attorneys to explore and develop expertise in a wide variety of legal situations.

“This client had a tremendous amount of litigation,” says Chandler, “and we found ourselves working on complicated cases that normally a first or second year attorney would never have the chance to be involved with.”

“Actually, some of the work was at a level that many 10th year attorneys haven’t experienced,” adds Shechet. “We weren’t afraid to jump in with both feet. Whatever we didn’t know, we made sure to educate ourselves in and turned to people we respected and who had mentored us in the past for advice.”

“We learned by doing,” says Chandler, “and working on such high-level litigation showed us just how exciting and interesting it could be. It may not have been the path that we had originally envisioned for ourselves, but we both came to love it.”

Shechet adds, “And I guess we did a pretty good job because that client is still with us nearly 10 years later!”

This auspicious beginning was a portent of things to come. Quickly, primarily by word of mouth, clients began flocking to their door for every manner of litigation and general counsel work.

“We were very flexible,” says Shechet. “People would come to us with every kind of request. And, we would just say, ‘Sure, we can learn that and help you.’ These were larger businesses too, who had worked with other lawyers, from much bigger firms, but they preferred working with us. So, it just sort of evolved into a lot of litigation, which we find absolutely fascinating.”

It didn’t take long for the young firm to earn a reputation for getting things done and subsequently, the referrals from other attorneys and previous clients began pouring in.

As previously mentioned, Chandler and Shechet complement one another in virtually every way, much like connected pieces of a puzzle. Nowhere is this more apparent than in their professional lives. As evidenced by their distinctively different undergraduate degrees, each has their own interests, which translate into having their own unique approach to law.

The two first met while taking a course in trial practice. Shechet found the class stimulating and an excellent opportunity to flex his already strong presentation muscles, while Chandler was actually there in an effort to overcome her fear of public speaking.

A businessman at heart with exceptional negotiating skills, Shechet comes alive in a courtroom. Confident and charismatic, he argues each case with passion and finesse.

“My background and experience in business has really helped in litigation,” he says. “I like the challenge. I like formulating a strategy that ends up working. That’s the best — when you can predict the outcome ahead of time and everything goes as planned. That really is the best, because that means that you have thought it through and read the situation accurately.”

Chandler, on the other hand, thrives on finding resolution for all parties. Graduating Pepperdine School of Law in the top 15 percent of her class, Chandler also earned a certificate in dispute resolution from the prestigious Straus Institute. In fact, her interest in mediation was so great that once the firm got going, she returned to complete her master’s degree.

“I do a lot of mediating and Aaron has been an arbitrator in over a dozen cases,” she says, “and those unique perspectives allow us to use these skills in planning our cases. I tend to approach our cases asking, ‘What can we do to set this up for settlement?’ and Aaron’s approach is, ‘What can we do to prepare the case for a judge or jury?’ We end up being prepared regardless of which way a case goes, and our two perspectives lead to a better outcome in either scenario.”

Representing parties at the trial and appellate levels, Chandler & Shechet’s cases include complex real estate and intellectual property litigation, breach of contract and partnership disputes, and opposing and defending trademarks in the Trademark Trial and Appeal Board. In late 2010, Shechet was retained to provide an expert opinion in Phil Spector’s lawsuit against Robert Shapiro.

“Having our own firm allows us to get involved in matters that interest us, such as legal ethics, as well as taking on pro bono representation in certain instances” says Chander. For example, Chandler and Shechet decided to submit an Amicus Curiae brief before the California Supreme Court in In re Stephen Glass, on admission 58 Cal.4th 500 (2014), and more recently they represented a group of teachers in the Court of Appeals in Vergara v. State of California 246 Cal.App.4th 619 (2016). “Having the flexibility to do our own thing has also allowed me to become a lawyer in D.C. and Washington State,” says Shechet.

Looking to the future, the couple anticipates continued growth for their firm and a lifetime of happiness as a couple.

“Our private and personal lives blend effortlessly,” says Shechet. “We love what we do, and have so much fun working together.”

Always quick to add some humor, Chandler quips, “Running a business together is the best kind of marriage therapy.”