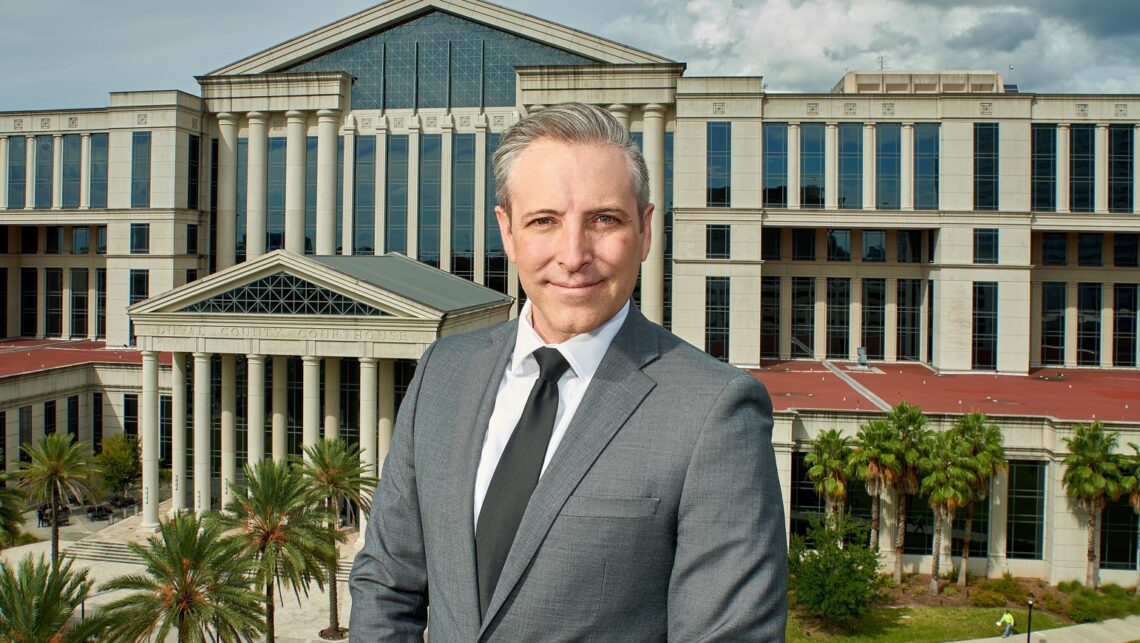 He may hail from the country’s gaming mecca, but real estate attorney Clayton Lake II never gambles when it comes to client care. “I was born and raised in Las Vegas where customer service is a priority no matter what industry you are in and it’s always been important to me,” he says. “I would be amazed when I’d see reviews of attorneys not returning calls or responding to emails. Now there is no excuse not to respond, email, text, autoreply. Technology is changing the industry in all aspects.”

Lake may have developed some of these strong customer service traits as a real estate broker but according to this Nevada native, he metaphorically cut his teeth even earlier than that. Growing up in a city whose primary focus is catering to tourists, Lake had the opportunity to experience this level of customer service firsthand when he held the proud distinction of being the youngest sales and marketing director for the renowned Plaza Hotel at the crest of downtown Las Vegas.

“It was an amazing experience,” he says. “I traveled the world wooing customers for the Plaza Hotel/Casino, and I think I learned a lot about customer service and the importance of how you treat people along the way.”

Ambitious and dedicated Lake next decided to tackle the real estate profession. Still quite young, he quickly scaled the ranks and consistently ranked among the top producers. So why would someone already immersed in a career where he’d found so much success one day decide to become a lawyer?

“For me it wasn’t something that I realized or wanted,” says Lake, “it was more of something I needed to reach the next level in my profession. I didn’t grow up watching courtroom TV shows and movies. I started real estate at an early age and quickly became a top producing real estate agent and then a broker. Soon after I started a successful brokerage called Keeping It Realty.

“I still felt like I was missing something in my life and needed to do more,” he adds. “I saw people that were being taken advantage of and needed help in their real estate needs. Most of these people didn’t have the money to go up against some of the bigger pockets. They were already at their limit in their investment. I am now able to help people on another level, it is more rewarding and fulfilling to me.”

Leaving behind a thriving real estate concern to return to school is not just brave but potentially laden with drawbacks not to mention the risk factor. He’d already built his own successful brokerage, why roll the dice on a law career? It might be a point when most would turn back, return to the safety and security of a well-established source of income, but Lake says it wasn’t that easy.

“I just felt it was something I had to do for me,” he says. “It certainly wasn’t for the money, the path I was on as a broker was already providing a comfortable life and it was only getting better. Law school was just something I felt deep inside was something I needed to do.”

Fortunately, he had the support of his family, especially two very understanding parents. “I honestly couldn’t have done it without their support,” he says. “I’m aware that is what helped me make the leap. It was the special kind of belief in me and the unqualified support they offered when logically they should’ve said, ‘What are you crazy?’ None of this would be possible without them.

“I recall vacillating over the pros and cons, all the while knowing this was something I really wanted,” he continues. “I remember playing devil’s advocate with my parents saying, ‘but I’m almost 35 years old!’ They responded very calmly, ‘You’re going to be 35 regardless. You may as well be doing what you truly desire.’”

Once he decided to take the leap, Lake says there was no looking back. He was fully committed and determined not to be like so many who lost their way.

“As far as the best lesson I learned, it was to always do your homework,” he adds with a wry grin. “If you don’t prepare you will look like an idiot and that’s not only embarrassing but it’s also bad for business. Even to this day I have seen some big-time lawyers go down because they didn’t do their homework.”

Lake feels he was in many ways at an advantage returning to school after living and succeeding in the real world. Law school was both fun and challenging, a combination he loves. However, he saw many struggling and offers this advice to would-be or current law students.

“I would say you have to have grit to get through law school. I saw some of the smartest students flunk out because they thought they knew it all. They would go party or to the beach instead of studying. It just showed me to never underestimate those who want something badly enough.”

Like most law students, Lake did his share of internships trying to learn and absorb as much as possible along the way. One of the side benefits was a renewed appreciation for nature and the Florida landscape in particular.

“I interned at the Public Trust Environmental Legal Institute of Florida,” he says. “It was an eye-opening experience to see how many companies will try to save a buck and not protect natural resources. Florida is such a beautiful state, and we need to keep it that way.”

Having reached a new level of success as a real estate attorney, Lake can take a moment to appreciate everything about his work that he enjoys and is motivated by.

“There is a lot of truth behind the expression there are two sides to every story,” he says. “I have seen the poor tenant being taking advantage by the rich landlord, which you hear a lot about in the news, but I also see the other side too. Sometimes these landlords are even our servicemen and women and just don’t have the means or time to evict a bad tenant. I can help in both cases. I also love when a first-time homebuyer comes in to close on their home or a family purchasing their dream home.”

So, what was a desert rat doing in the balmy Florida climate? Law school drew him, but Lake says he always had a strong affinity for this coastal state.

“I’ve always loved Florida,” he says. “I love the climate, the atmosphere and the people who all seem so friendly. I felt at home the minute I stepped off the plane.”

“Sometimes I think I must be one of the luckiest guys in the world,” he says grinning. “I had literally just landed in Florida where I attended law school, when I met a great guy, Jay Alberteli, who not only offered me his home to rent at a crazy affordable price, especially for beachfront property, but introduced me to his brother, James, one of the best attorneys in the country who really opened a lot of doors for me professionally and served as something of a mentor while I was in law school.”

Naturally it’s not always an idyllic world in which Lake or his clients reside. While on the whole Lake says he is so happy he made the move into law, he also admits there are challenges too.

“Right now, is a weird time for real property law, especially with eviction and foreclosure laws due to the pandemic,” he says. “It seems like almost every day the statutes are changing. Then there is modern day technology where a person doesn’t even need to get off the couch to buy a property. They can do everything virtually from their laptop or even their smart phone.”

That is not to say that Lake doesn’t utilize and in fact appreciate the tools and ease that new technology provides. He simply acknowledges that so many do-it-yourself real estate website can leave the buyer or seller vulnerable.

Somehow this driven attorney has found time for love as well. In fact, while passing out words of appreciation, Lake is quick to praise the support he’s received from his longtime girlfriend Ashley Tatum. “Ashley has been there for me from the start,” he says. “Best of all, and what’s most impressive, is that she even sold her home to follow me here to Florida. I think she loves it as much as I do, I just know having her with me makes everything better.”

In addition to running his own practice and tirelessly working on behalf of his clients, Lake makes time to serve in various capacities in his community.

“I have been introduced as the friendly neighborhood real estate attorney,” he says with just a hint of pride. “I appreciate the kind words and love when people want to work with me. Neighbors and especially Realtors who are having contract disputes and questions, etc. Which in return brings more business to me. It’s not about marketing now days, it’s about the value you bring to people, and they see it. The local community is great, and everyone helps each other for the most part.”