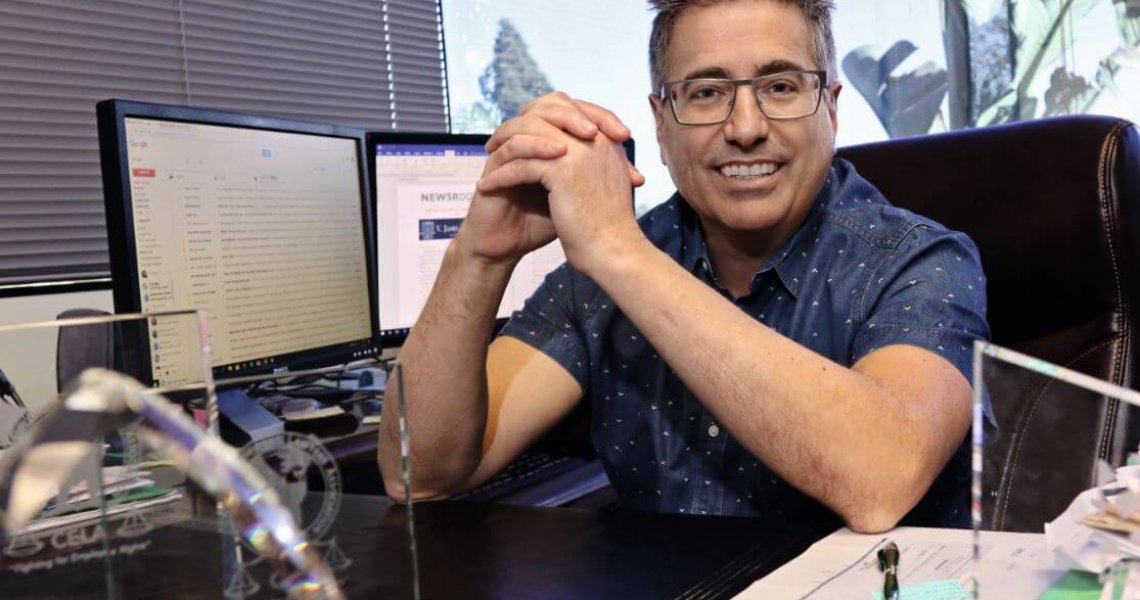 A crusader for victims of those who abuse position and power, Jim DeSimone has been fighting the good fight throughout his 30-plus year career. Already recognized with numerous awards and accolades, his most recent distinction was being named Trial Attorney of the Year by the Westside Bar Association. This honor, bestowed before dignitaries and colleagues at a lavish event, just happens to coincide with the two-year anniversary of opening his own firm.

“We’ve had a great deal of success in those two years,” DeSimone says with pride, “and we’re looking forward to achieving even more in the years to come.”

DeSimone’s early work from 1987 to 1990, as a staff attorney at Westside Legal Services in Santa Monica, California provided a solid foundation for his civil rights advocacy. There he honed his trial skills and developed a true passion for helping the “little guy.” As the lead trial lawyer, DeSimone represented lower income families and individuals who could barely afford life’s necessities let alone an attorney. Compassionately, he took on cases that others might avoid due to the complexities or the fact that there was little if any, money to be made.

“I think I first became truly aware of the multitude of injustices when I was in college and law school,” says DeSimone. “I was very involved in the anti-apartheid movement. We had very large demonstrations trying to get the regents to divest of companies that were doing business with South Africa.

“The year that I graduated law school, I represented all the students who were arrested at UCLA for committing civil disobedience. In order to do that, the first lawsuit I ever filed under my own name, was suing the University of California regents for violating the constitutional rights of those students.”

DeSimone not only had a ringside seat at these demonstrations, he was a participant who also found himself in handcuffs. That advocacy resulted in the university dropping its most serious charges against the arrested students and culminated in the University of California divesting all its holdings from South Africa. It was a natural progression for him to apply his education to helping the clients of the Westside Legal Services, where he became even more adept and committed.

Armed with this experience, in 1990, he founded the innovative civil rights firm of Schonbrun & DeSimone, which would later grow to become Schonbrun DeSimone Seplow Harris & Hoffman. Over the years, this cutting-edge firm earned a reputation as one of the most prestigious civil and employment rights law firms in the state of California, if not the country.

Virtually from the start, this firm was making a name for itself and its attorneys. Not yet past its infancy, the historical case of Mogilefsky v. Silver Pictures, established a precedent upholding the validity of male on male sexual harassment, that attorneys are still using today.

“As a civil rights lawyer, that’s what you become most proud of,” says DeSimone. “When you can help an individual client, that’s terrific; but when you can take a case to the court of appeal and establish a binding precedent, that can potentially help all working people, well that’s truly gratifying.”

Twenty-five years later, DeSimone is just as vigilant and impassioned about his role as defender of the trod upon. Carving out another new path, his latest venture was the creation of V. James DeSimone Law. Dedicated to serving and protecting individuals in civil rights cases, the practice has a special focus on employment discrimination and harassment, employment wage and hour class action cases, police misconduct and brutality cases and personal injury cases. DeSimone is of counsel to Bohm Law Group, which allows him to utilize its state-wide resources and substantial support staff and associates in prosecuting these cases.

Unless living under a rock, one cannot help but be aware of the dozens of women who have lately come forth naming the men, many in high-ranking government posts or other easily recognized positions, who they say are guilty of varying degrees of sexual harassment. For DeSimone this is nothing new, he’s been handling such cases his entire career. However, he does feel gratified that this recent notoriety seems to be bringing attention to a situation that has been long hidden in the shadows.

“I was happy to see that Time Magazine honored these women that have come forward, by featuring them on the cover,” he says. “This has been an issue that has driven me since the early ’90s, and I’ve been fortunate enough to have achieved important appellate victories that created good laws for individuals who have been sexually harassed.”

In fact, DeSimone’s first seven-figure jury verdict was on behalf of a woman whose indignities were exacerbated by being arrested and spending a night in jail.

“It’s a very poignant story,” says DeSimone. “My client was a customer at Walgreen’s and was detained by the security guard who was trying to engage in quid pro quo sex with her. The situation escalated to the point where my client was calling 911 and the guard knocked the phone out of her hand. When the police arrived, they accepted the felonious version of what had transpired offered by her attacker and she was arrested.”

“We took that case to trial against Walgreen’s,” he continues. “Not only did we have a cause of action for false arrest, but we also had a cause of action under California’s civil rights law which allows you to prosecute individuals who threaten violence against someone due to their gender.”

Ultimately, the jury awarded $2.1 million in what is believed to be the largest verdict in a false arrest case that involved a single night in jail. This remarkable achievement resulted in the Consumer Attorneys Association of Los Angeles nominating DeSimone for Trial Lawyer of the Year.

Television viewers are accustomed to a tidy and efficient conclusion of even the most complicated of legal disputes to be achieved within an hour, minus the commercials of course. Obviously, real life is nothing like this and cases can drag on for months and sometimes even years. However, not many extend across the length of 17 years as was the situation for DeSimone.

As lead trial counsel in the case of Xue Lu et al. v. United States of America, DeSimone achieved a $1.2 million verdict on behalf of the two plaintiffs where an asylum officer employed by the United States, demanded sex and money in return for approving their asylum applications. For his success and tenacity in handling this 15-year battle, the California Lawyer Magazine, sponsored by the State Bar of California, named DeSimone Civil Rights Lawyer of the Year in 2014.

“My vision when I first began my career is essentially unchanged,” says DeSimone, “and that is to continue helping those who have been wronged in sexual harassment cases, discrimination cases, excessive force cases and anywhere there is an abuse of power that serves to harm an individual.

“My vision has also always been to be part of a firm that will provide the resources to take these cases to trial,” he adds. “The first case we took to trial in my latest incarnation, was Yowan Yang who had been attacked at work and then was accused of provoking that attack and was fired.”

The firm took a unique approach with this case and DeSimone worked with his former associate and of counsel to his firm, Kaveh Navab, and Ryann Hall, a Bohm Law Associate. By combining their civil rights expertise with their extensive employment experience, they were able to use California’s civil rights laws to vindicate Yang. Presented as a combination workplace violence and wrongful termination case, DeSimone’s firm was successful in convincing a federal court jury that Yang had been twice victimized, and they awarded $2.4 million in compensation and $5 million in punitive damages.

“It was a groundbreaking victory,” says DeSimone, “and even more impressive when you consider that it was achieved within the first six months of establishing this practice. And it was very rare to utilize California civil rights statutes to vindicate an employee accused of misconduct.”

His commitment to justice and exemplary legal work resulted in the precedent setting case of Johnson v. United Cerebral Palsey et al. 173 CA4th 740 (2009), where the court of appeal not only ruled that “me too” declarations were admissible to defeat summary judgment but that the trial court was required to admit the testimony of other women who had been discriminated against. He emphasizes. “The Johnson case is a game changer where you have several victims of discrimination and harassment. Trial courts can no longer take the easy way out by excluding #MeToo testimony.

DeSimone loves biking along the paths that line the beach. It’s just one of the many ways he chooses to unwind after a long day in court. His love of music leads to attending many of the great concerts that can be found in various venues throughout the Los Angeles area.

“One of my favorite ways of spending my time off is is with my wonderful daughter,” he says. “She’s 21 now and she’s a very interesting person. We have some great family times together.”

DeSimone also enjoys spending time and practicing law with Carmen Sabater, who he describes as, “a passionate advocate for the rights of police misconduct victims and employees who have been wronged.” Sabater was formerly a police officer with the New York Police Department providing an insider perspective on prosecuting civil rights claims.

It’s hard for DeSimone to stray too far away from the office or courtroom however, that’s where his true passion lies. Even while biking or listening to his favorite CD, his mind will inevitably gravitate back to the current case and how he can approach it.

“You have to be creative in strategizing,” he says. “But, the most important thing, especially in the kind of representation that I han dle, is you have to sincerely care. For example, I hear many people criticizing the women who are coming forward in these sexual harassment cases. ‘Why are they just now coming forward?’ And, I know that there are a lot of people who doubt that these charges are legitimate.

“After as many cases as I’ve handled, it is clear to me that no woman in her right mind would put herself through all this if she really didn’t feel victimized. As a woman, you know going in that you’re going to be dragged through the mud, challenged and even shamed. These women are heroes in my book and deserve our respect and admiration.”

DeSimone is currently handling several sexual harassment and assault, employment discrimination and police excessive force and wrongful death cases and looks forward to trying even more cases in 2018. “We always try to achieve a beneficial settlement for our clients, but, ultimately, the court room is the great equalizer and a very effective forum to achieve justice and full and fair compensation for our clients.”