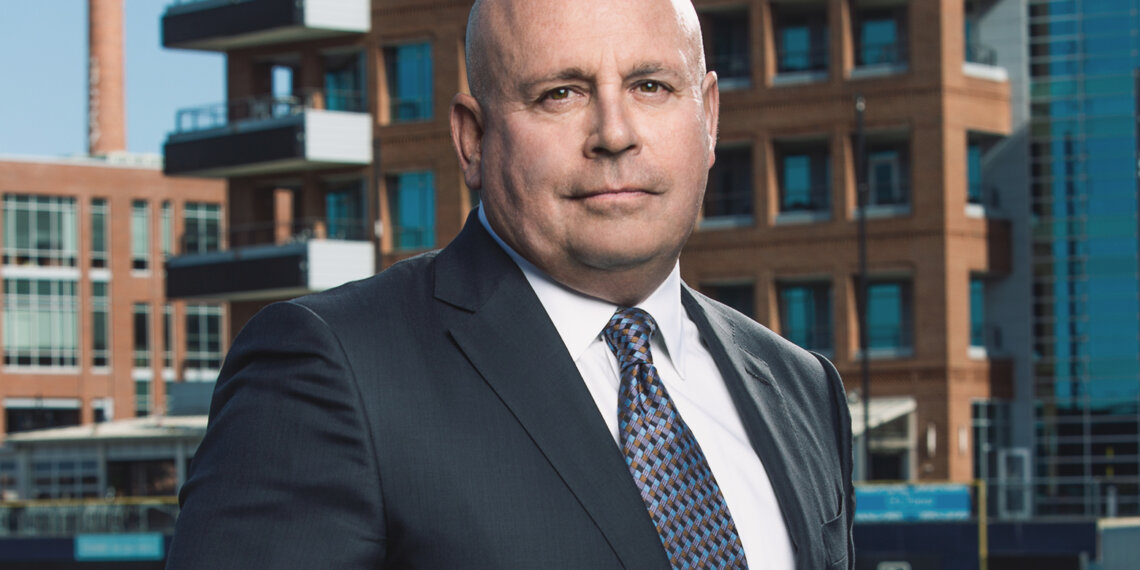 Hoyt Tessener was finished. It was 2016. After 25 years as the top litigator at a Raleigh personal injury law firm and an unsuccessful run for Superior Court judge, he had formally retired.

But the phone soon started to ring with firms asking for help with individual cases, or with job offers. Then came an intriguing call from James Scott Farrin, whose firm may then have been best known for its ubiquitous TV commercials, its workers’ compensation practice, and its high-volume car crash practice.

Tessener’s practice had been quite different. He had tried over 100 cases, primarily serious automobile and trucking accidents, nursing home neglect, medical malpractice, fraud, and product liability claims resulting in lots of multimillion-dollar awards.

Farrin told Tessener he was looking for a power hitter to remake and lead the firm’s litigation department. He wanted Tessener to build a department that could, and would, successfully litigate any type of case, including mass torts and class actions on the national stage.

“Our mission is to provide quality legal services and quality work in every department. Litigation was one area, where in my judgment, we did not always meet our standards,” said Farrin. “Hoyt had the track record. He was renowned. He had leadership and teaching skills so that he could build a department, mentor young attorneys, and create something much bigger than himself.”

Farrin bucks the image of a TV car wreck lawyer. He is quiet, reserved, and cerebral. He is slender with a shock of blonde hair across his forehead. Tessener, on the other hand, is bald and barrel-chested with an oversized personality and presence that fills the room.

So, over three years ago, when Farrin announced that Tessener had joined the firm, he got a call from another lawyer who said, “This is going to be interesting. I’m going to grab some popcorn. I want to see how it plays out,” recalled Farrin with a laugh. “The image many had was of two strong-willed, control freaks doing battle.”

“We have healthy egos, but we stay in separate lanes.” said Farrin.

“It’s a perfect marriage,” added Tessener. “The work I’m doing now is right in my wheelhouse. It matches my skill set.”

Farrin gave Tessener free rein to develop and run the litigation department. Since joining, Tessener has grown the practice area from five lawyers to 16, a number of whom were senior litigators from some of the top law firms in the region – such as Gary Jackson, former president of the NCAJ and Coleman Cowan, who previously worked with Hoyt before taking a 10 year hiatus from the law as an Emmy-winning 60 Minutes producer.

“We get a lot of resumes, and we are going to continue to grow,” Tessener said. “We have no cap on what we are going to do and how we are going to do it. We have a great set up, and we will keep growing as long as we have good cases to file. I also expect us to add talented litigators with expertise in new areas that fit our mission, such as civil rights litigation or employment discrimination.”

Tessener is aggressively looking for class action and individual major catastrophic cases for the firm.

“We don’t hesitate to co-counsel,” explained Tessener. “A rising tide lifts all ships. If we feel like somebody has more expertise in an area that’s going to help our client, we are happy to reach out to them. By the same token, we are available to work with anyone else. Referrals often come when smaller firms may be looking for more resources, when lawyers don’t practice this kind of law, they don’t want to handle a case this big anymore, or they don’t have the financial ability to build a complex case by themselves.”

“We want to run the gamut of litigation,” Farrin said. “In the past we handled class actions like the $1.25 billion black farmers case, but most of our mass torts were done through referral. We want to do more of these cases in house as our capabilities expand.”

Nursing homes are another fast-growing source of litigation for the firm due to the aging of the population. Most of the cases are the result of short staffing. The firm also has a burgeoning practice representing whistleblowers in qui tam actions.

“The energy of opportunity is contagious,” said Tessener. It could be this afternoon that we start a new project,” said Tessener. “It’s really driven by what is going on, what the case is, what our expertise is, and, most importantly, what’s going to be best for our clients.”

The Law Offices of James Scott Farrin is run like a business (it recently was named the Best Place to Work for large companies in the Triangle). The firm uses numerous systems and processes that allow it to handle a large volume of cases without sacrificing quality legal work.

Farrin built its own case management software and launched a subsidiary software company called GrowPath three years ago. The product is now being sold to law firms across the nation.

The GrowPath software grew out of a 2007 landmark civil rights case, which required the firm to review applications from tens of thousands of black farmers nationwide who were potential plaintiffs in a discrimination case against the U.S. Department of Agriculture. The USDA’s pattern of discrimination had earned it the moniker, “the last plantation,” and resulted in a $1.25 billion settlement.

Tessener has been an adjunct professor at Campbell Law School for over 20 years. One of the attractions for heading up the litigation department was the chance to work with young lawyers like his son, Nicholas, who joined the firm this year after graduating near the top of his class at Campbell Law.

“The first thing I teach young lawyers is to be genuine. Be yourself,” explained Tessener. “I don’t look at teaching any particular style or ask you to act this way, dress this way, or say this or say that. You’ve got to be genuine. After that it really comes down to putting in a sustained period of hard work. It’s really knowing your client, understanding how they have truly been affected, and then to be creative.

“I push young lawyers to have a theme for their case,” he continued. “How do you wrap this case up in something like an elevator pitch for the jury to look through as a prism to make their decision? I also want our lawyers to behave the right way. This is civil litigation, and you should act civilly and professionally. Play the long game.”

At this stage, “Hoyt and I are very cognizant of building success for the next generation of people at our firm, like Nicholas,” Farrin said. “That’s at the forefront of our minds, trying to leave something even better than what we built for ourselves.”

But Farrin and Tessener are quick to point out that Tessener is more than just the hitting coach for young lawyers.

“I still want to go up to the plate if the bases are loaded. It’s not that I would not handle a smaller value case, but as long as I know it’s going to be done right, I’d rather someone else get that experience,” said Tessener. “But if it’s going to be one of the biggest cases, then I expect to still go in and swing the bat.”