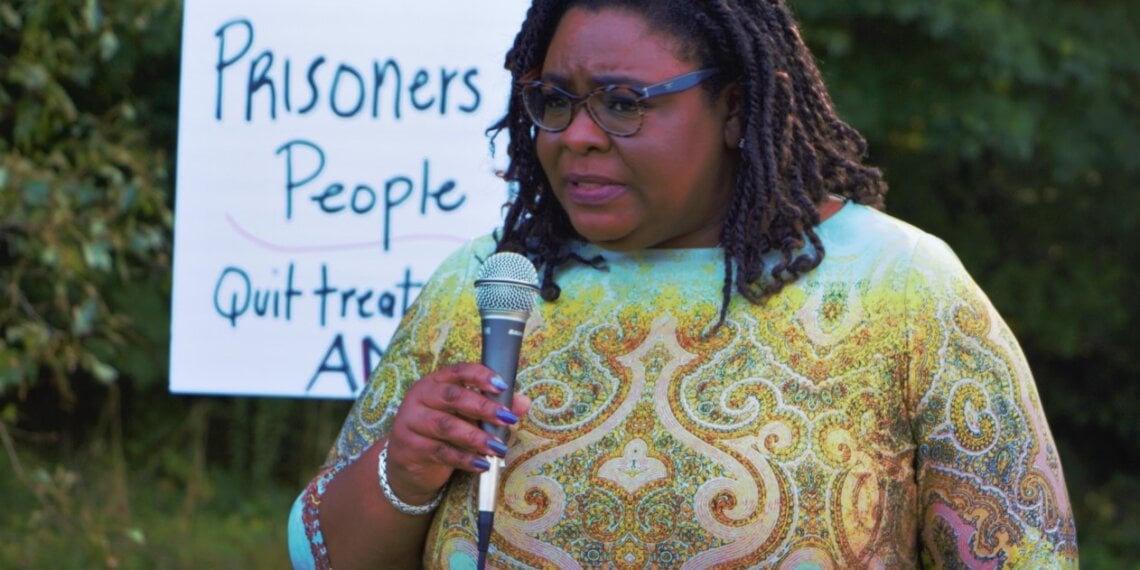 Amanda Marriner is calling for the release of her wife, Sandra Dowell, from Swannanoa Correctional Center for Women to avoid exposure to COVID-19. Dowell suffers from several serious medical conditions and is up for parole in 2021. “The prisons are already overcrowded, there’s no way they can stay six feet apart,” said Marriner. She spoke at a September 15 rally hosted by Emancipate NC outside the NC Correctional Institute For Women in Raleigh to boost support for NC NAACP v Cooper.

The organization’s associate director Elizabeth Simpson, one of the attorneys working on the litigation, told the 50 people attending the rally, “Our main demand is to reduce the density of the prison population by releasing people who are medically vulnerable or at the end of their sentences.”

Rallies like this one are emblematic of Emancipate NC’s evolution from being reactive when it was founded in 1976 as the Carolina Justice Policy Center to being proactive under Executive Director Dawn Blagrove. A graduate of NCCU School of Law, she worked for eight years as a post-conviction staff attorney with North Carolina Prisoner Legal Services.

Blagrove is a firebrand who can’t help but sweep you up with her passion. “Emancipate NC was founded on the knowledge that mass incarceration and structural racism harm all of us. Prison is state-sponsored violence,” explained Blagrove. “We are all complicit in its harms. As an organization, we are dedicated to shifting the narrative on racialized mass incarceration through community education and mobilization.”

The organization’s hot button issues are bail reform, ending youth confinement, subverting structural racism, and restorative justice. The bulk of Emancipate NC’s work is with people of color. “That particular population just happens to be the one most deeply impacted by the inequities in the system,” said Blagrove.

Emancipate NC has three full-time staff members. Much of the work at the grassroots level is done by the “Justice League.” It is a group of forty people across the state, who have been incarcerated, have had family members who were incarcerated, or people who work in the legal system.

“We give the members of the Justice League the tools they need like leadership education and, ‘education not incarceration’ training,” said community organizer Kerwin Pittman, who supervises the Justice League. “We connect them with other activists around the nation. We see what they can do to best utilize their skills and enhance their skill sets, whatever they’re good at, like public speaking, writing letters or doing paralegal work.”

Staff and members of the Justice League speak to high schools, community organizations, attorneys, churches, and NAACP chapters across the state. “The goal is to educate people in the community about how the system works, who the system actors are, and the power each of those actors have,” said Blagrove. “Then, we educate folks to identify the ideas or the issues that they think are most critical in their communities and help them craft policies based on what they want their criminal justice system to reflect.”

One policy that gets a lot of attention is bail reform. “When you can’t post bond, you lose your job, your apartment, your car, and your family suffer” said Raleigh plaintiff’s personal injury attorney Chris Nichols, a long-time Emancipate NC supporter. “The true societal costs of cash bonds ripple out well beyond the accused.”

“Last year, we were able to help Wilson (NC) police and sheriffs implement a cite and release policy, saving hundreds of people from being physically arrested and eliminating the need for cash bond to be paid,” said Blagrove. “For non-violent misdemeanors, these agencies are now issuing citations, like speeding tickets, instead of arresting people and taking them to jail.”

Blagrove lists “restorative justice” as another high priority. “It’s taking the paradigm of crime and punishment and flipping it on its head. At the base of any conflict or any crime or any harm committed by one person against another are broken people. Through restorative justice, instead of using a criminal justice system to traumatize the parties further, they would come together, talk about what happened, then reconcile in a way that is not punitive, but that is restorative.”

“Not only is Emancipate NC bringing these issues the attention they deserve, but they also have strong policy initiatives to change how we accomplish justice in America,” said Nichols. “Achieving true justice in North Carolina and America means that all of us need to know the scope of the problem. Emancipate plays an important role in educating policy-makers and the public. And once you know the facts, it’s hard to unknow them.”

Emancipate NC is a nonprofit NGO funded through individual donations and some grants. The confluence of COVID 19 and the Black Lives Matter movement has resulted in a spike in donations in the last six months.

IMMEDIATE NEEDS OF THE PEOPLE

Where seemingly watershed moments in the civil rights movement in the past have fallen short, the Black Lives Matter movement since George Floyd’s death seems to have a fair amount of inertia.

“I’m cautiously optimistic that this moment is different,” said Blagrove. “It’s the perfect storm of COVID-19 and folks being consigned to their homes and being very aware of what’s going on around them. I think because of COVID, people are actually able to slow down enough to see the systemic and institutional racism that we see in the systems all over the United States, particularly as it relates to the criminal justice system.”

“We have to be realistic about the challenges in place. It is always hard to disrupt a system that is so deeply entrenched like the criminal justice system is in America; to untether law enforcement and the need for force or the need for prisons,” said Blagrove. “That’s really what we are trying to do is to create a society where the people keep each other safe, where we do not need armed law enforcement roaming our streets, where we do not need 911, where there are alternatives to law enforcement that are more responsive to the immediate needs of the people.”