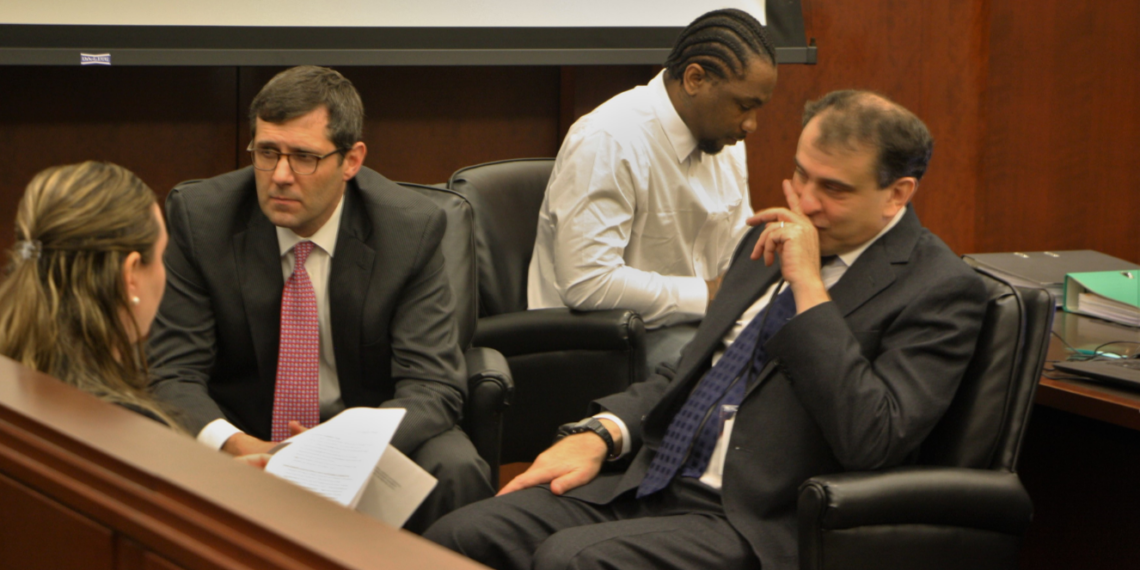 Seaga Gillard sat quietly at the defense table in a Wake County courtroom in January 2020 as his attorneys Edd K. Roberts and Jonathan Broun prepared for the first day of jury selection.

Gillard was charged with first-degree murder in the 2016 brutal deaths of April Lynn Holland, who was pregnant, and Dwayne Garvey. Both were gunned down in a room at the Crabtree Valley Best Value Inn. Gillard was found guilty, and a Wake County jury unanimously recommended of murder the death penalty.

Broun, who is senior attorney with the North Carolina Prisoner Legal Services (NCPLS), had been assigned as co-counsel by the Capital Defender after the district attorney offered aggravating factors and declared it a death penalty case.

“I’ve handled a dozen murder cases, but this was my first death penalty case,” said Roberts. “Jonathan has considerable experience with death penalty cases. He brings a wealth of knowledge and experience to these cases where the state is attempting to take an individual’s life.

“There are two phases in a death penalty case,” Roberts continued. “First, the jury must determine if the suspect was guilty or not guilty. In the second phase, or sentencing phase, we are trying to convince the jury that our client’s life has value, and they should not be put to death.

“What becomes really critical in a capital” case is mitigation; finding out the entire life story of the defendant to determine what humanizing characteristics may impact the jury to give a life sentence versus a death sentence.”

Broun and a mitigation specialist appointed by the N.C. Office of Indigent Defense Services went to St. Lucia, where Gillard grew up. They talked to his teachers, family and neighbors.

“This kid grew up in the streets, without a dad and his mom had to struggle to raise him and his brothers and sisters. It was a poverty situation where he was left to be raised by the streets,” said Roberts.

Jonathan Broun has been doing capital cases since 1994. Over the last four years, he has had four first-degree murder trials before Senior Resident Superior Court Judge Paul Ridgeway. Three of them were capital cases.

“In two cases which I tried in front of Judge Ridgeway, we were able to secure a life sentence: Nate Holden in 2017 and Travioin Smith in 2016,” said Broun. “Also, along with Beth McNeill of NCPLS, we represented James Blackmon last year who was found innocent by a three-judge panel and released after serving over 35 years for a murder he did not commit.”

“What every judge wants, and every citizen should expect is that justice and truth prevail in our courtrooms,” said Judge Ridgeway. “The best way to ensure that is to have people like the North Carolina Prisoner Legal Services involved in some of our tougher cases. They have the ability to focus on cutting edge or emerging issues in the justice system. There may be new or nuances in constitutional rights that are created by the U.S. Supreme Court or the North Carolina Supreme Court.”

HUNDREDS OF LETTERS EVERY WEEK

“NCPLS is a private, non-profit law firm that exists to provide people incarcerated by the State of North Carolina with their constitutionally required meaningful access to the courts,” said Mary Pollard, the recently appointed executive director of the North Carolina Office of Indigent Defense Services (NCIDS).

NCPLS contracts with the NCIDS to provide inmates incarcerated in the North Carolina Division of Adult Correction and Juvenile Justice with their constitutional right of meaningful access to the courts. The NCPLS has an annual budget of around $3 million, about 90 percent of which comes from the NCDIS contract. It has 16 attorneys and a total staff of around 30 people.

About 75% of NCPLS’s work is on post-conviction cases.

“We get hundreds of letters every week,” said Pollard. “Each and every letter from an incarcerated person concerned about the legality of their conviction or sentence results in a case evaluation by an attorney, and if the person has a viable claim for relief, our attorneys will offer to represent the person in a Motion for Appropriate Relief.”

Every letter is answered whether their case is accepted or not.

“Incarcerated people who write with concerns about conditions of confinement are offered advice and resources advising them about how to advocate on their own behalf, and our attorneys may offer representation in matters that involve serious violations of a constitutional right,” said Pollard.

“Because of the complications of sentence calculations under Structured Sentencing and because of the convoluted processes involved in calculating and applying jail credit, NCPLS more than pays for itself every year by correcting improperly calculated sentences and ensuring that the Division of Adult Correction is not spending tax dollars to incarcerate people beyond their lawful release date,” said Pollard.

“By assisting one client at a time, I fight the systematic problems of the death penalty like in the Gillard case and the criminal justice system in general,” said Broun.