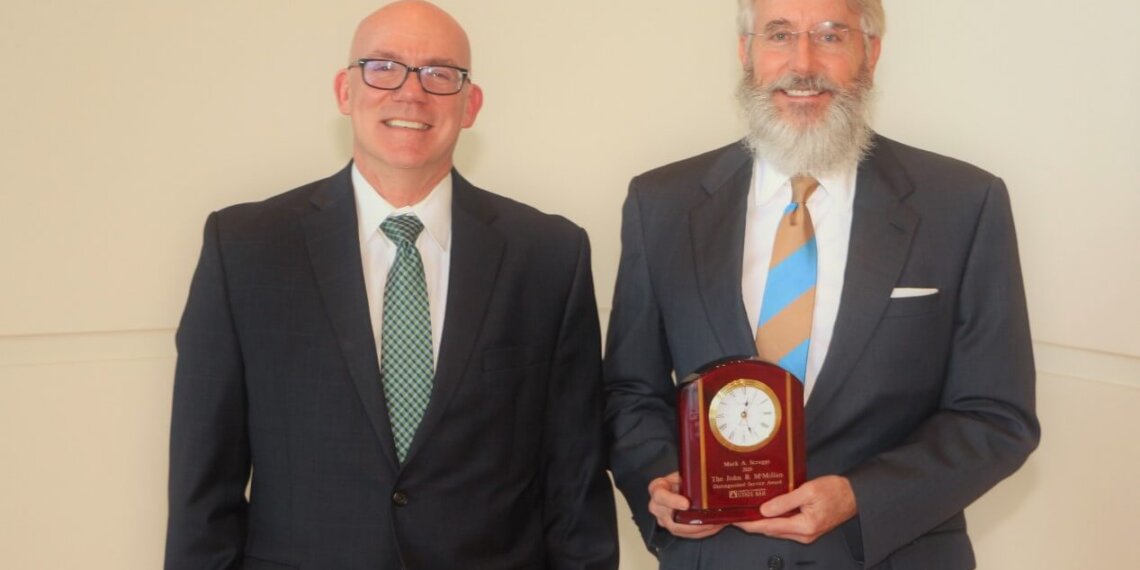 It would not be a stretch to see a lawyer on a psychiatrist’s couch in the office of Lawyers Mutual’s Mark Scruggs (pictured right). “I’m a counselor as much as anything else,” said Scruggs.

In his role as a Senior Claims Counsel at Lawyers Mutual, Scruggs spends a lot of time educating lawyers about the North Carolina State Bar’s Rules of Professional Conduct, as well as talking with lawyers who may have run afoul of the rules.

For his 18 years as something of a legal therapist, Scruggs received The John B. McMillan Distinguished Service Award from the State Bar on December 3, 2019.

BEING A GOOD ADVOCATE

A native of Richmond, Scruggs graduated from Bluefield College with a Bachelor of Arts in history. He spent six years as a claims adjuster for Aetna Life & Casualty Insurance Company before earning his Juris Doctor from Campbell Law School in 1986. For 14 years, he was a partner with Spears, Barnes, Baker, Wainio & Scruggs, LLP, in Durham, handling insurance defense litigation. Scruggs joined Lawyers Mutual in 2001.

He is a member of a seven-person team at Lawyers Mutual that fans out across the state teaching law students, lawyers who recently passed the bar and more experienced lawyers about the State Bar’s ethics rules and how to practice law malpractice-free.

“I think young lawyers, particularly need to be schooled on how to be a good advocate without being a difficult person, how to be a passionate advocate and still be civil to your opponent. They need to learn to be respectful of their clients and to let the client make the decisions the client has the right to make in the case. In every case, the lawyer gets to make certain decisions and the client gets to make others, such as decisions about the goals and objectives of the case (with the lawyer’s counsel, of course). Lawyers need to understand the difference.”

Scruggs served for several years as a member of the NCBA’s Transitioning Lawyers Commission. Helping baby boomers who want to retire, sell or transition their firms is a high priority for Lawyers Mutual and the NCBA.

“We’re looking at how does a lawyer safely transition out of a law practice?” said Scruggs. “How does a lawyer prepare a succession plan, so their exit goes smoothly for them and their firm? How do they transition to a new life where all they’ve ever known before was being a lawyer?”

Not long after he joined Lawyers Mutual, Mark Scruggs attended a State Bar Ethics Committee meeting. “I was absolutely amazed by that big group of lawyers who were very thoughtfully addressing proposed ethics opinions that were going to govern the profession for years to come.”

“My job led me into a lot of areas and opportunities to teach lawyers and to counsel lawyers,” said Scruggs.

“Lawyers call when they’ve made a mistake and sometimes you can tell they are absolutely climbing the walls and beating themselves up,” said Scruggs.

“Sometimes I do think its nice to say, okay, wait a minute, I’ve seen a lot of stuff this week and yours ain’t nearly as bad as some of the other stuff I’ve seen, so let’s put this in perspective,” he said with a laugh. “And oh, by the way, I think we can fix this. So, let’s talk about how we do that and if we can’t fix it, I just say, ‘look, we’re behind you, we’ve got your back on this.

“I’ve had so many lawyers say, ‘After we hung up, I knew it wasn’t the end of the road, but I sure felt better than when I called 10 minutes ago.’”