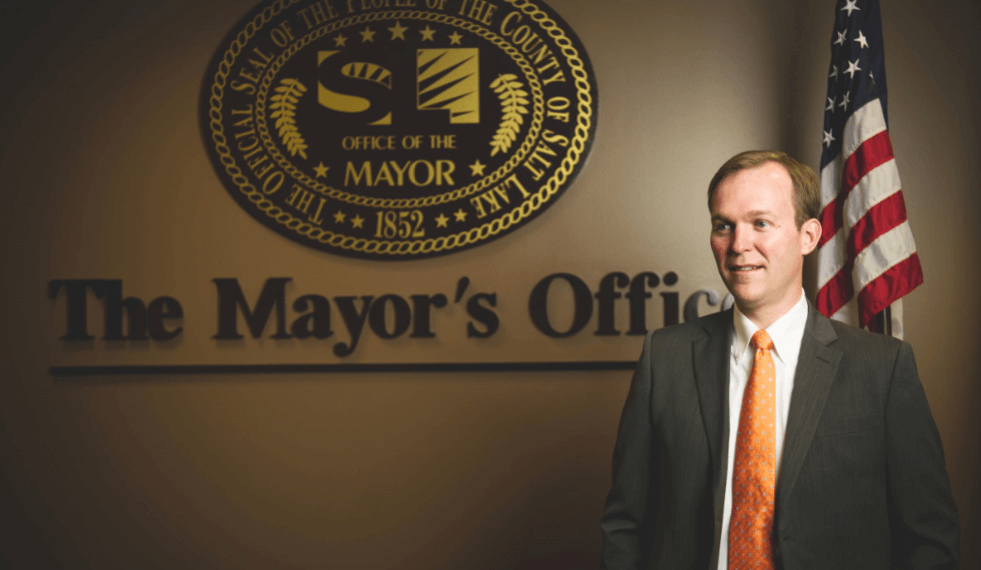 Salt Lake County Mayor Ben McAdams’ passion for his home state is evident in both his words and actions. Born and raised in Utah, he is the eighth generation of his family to call the state home. He attended high school and college in Utah before heading to Columbia Law School in New York with his wife, Julie, who also attended the school and is currently an attorney for the University of Utah.

After McAdams finished law school, he joined Davis Polk & Wardwell in the Big Apple as a corporate finance attorney practicing in securities, debt offerings, and mergers and acquisitions. But when the couple’s children were born, McAdams’ priority was moving back to Utah.

“Utah is a great place to raise a family,” he says. “I wanted my kids, and my eventual grandkids, to enjoy many of the things I enjoyed growing up here.”

Back at home, McAdams worked at Dorsey & Whitney before deciding to run for the Utah State Senate, where he was elected in a special election in 2009. During his second term in the senate, he ran for and was elected mayor of Salt Lake County. In January 2013 he was sworn into the position.

What made him seek the mayor’s office?

“I believe in the ability of local government to make a positive impact on the quality of life in our community and I wanted to be a part of that,” the 41-yearold mayor says. “Utah is an incredibly fine place to live, but we are growing so rapidly. I am concerned about holding onto what we love in the Salt Lake Valley. I am concerned about crime rates going up, traffic congestion, air pollution, homelessness and our ability to be safe in our communities. I worry about where we are heading if we don’t have strong leadership to help us hold onto what we love about our community.”

He not only brought that strong leadership ability to the job, but he also brought the strong financial and business background he gained during his years as an attorney. That background has been beneficial in managing the county to make sure it maintained its AAA-bond rating and used taxpayer money in a conservative way while gleaning maximum benefit, McAdams believes. The skills he learned while practicing law also helped him accomplish one of his goals of bringing quality early childhood education to lower income families in the community.

“One thing we have accomplished that I think directly goes back to my experience as an attorney and the skills I drew on in law practice, is the pay-for-success program we implemented with the United Way of Salt Lake [McAdams is on the board of that organization] to provide preschool to low income kids in Utah.”

The program, which invited third-party investors to pay for preschool and gain a return on their investment when specific benchmarks were met, has been highly successful. So far it has benefitted approximately 700 children. One of McAdams’ goals for the future is to see the program expanded to help even more low-income kids get a solid start in life, he says.

McAdams explains how his work in the legal profession naturally complemented implementing the pay-for-performance program.

“The United Way led the thinking,” he says. “Originally they had gone to the legislature to support their approach and the bill had failed in the legislature. When I came into office, I saw it as the same work I had done in the private sector. For example, when I was an attorney, I worked with companies looking to expand access to technology in Latin America. Telecom companies knew if they could put cell towers around Brazil they would have subscribers who would pay to have cell phones, including low-income individuals who didn’t have great cell access or a telephone in the home. We did stock issuances to raise money to expand cell networks in Brazil and the repayment was through individual and family mobile plans. I looked at the preschool proposal as the exact same thing I was doing in the private sector, raising investors willing to put forward some funding to help us with an initiative we believed was important. And if it worked, which it has, the repayment would come from taxpayer savings.”

McAdams is a democrat who believes that there is no time for partisan bickering when it comes to getting the work of government done. He strives to build relationships across party lines.

“I try to find people who are interested in working with me to make a difference,” he says. “I try to build partnerships that are effective in making the Salt Lake community a better place to live and work.”

When it comes to who inspired his work ethic and his passion for making a difference for people and community, McAdams says, first and foremost, it was his late mother, Susan McAdams.

“She was a schoolteacher and she raised six kids as a single mom,” he says. “She inspired us to learn and set high goals and work toward achieving our goals. She is a big part of who I am today. She worked hard but she also took the time to instill in me a passion for learning, reading, service and hard work.”

Indeed it is hard work that McAdams thrives on.

“I like to work hard,” he says. “Make no mistake, public service is a sacrifice in time and taking away from family, but I see it as an opportunity to give back and I just have a short window to give and I want to get a lot done.”

In addition to his work as mayor, McAdams gets a lot done outside of chambers. He spends considerable time working with the United Way and also volunteers with his church.

Family time is most oft en spent on the field watching his children play soccer, baseball or other sports. The couple has four children including 10-year-old twins, James and Kate, 8-year-old Robert and 5-year-old Isaac. Together the family enjoys skiing and snowboarding, bicycling, hiking and eating out. The kids especially like Vietnamese food, McAdams notes. They also enjoy watching Real Salt Lake professional soccer games.

The importance of family time is never far from McAdams mind – not only his family, but the families in the community. He hopes to be remembered as a mayor who worked in a bipartisan fashion to find cost-effective solutions to a variety of issues, just one of which is preserving outdoor spaces.

“I hope that my kids and grandkids can continue to enjoy clean water and our natural backcountry and our parks,” he says. “I hope as our population continues to grow there is enough space for kids and families to get outdoors and have fun in our beautiful Salt Lake Valley.”