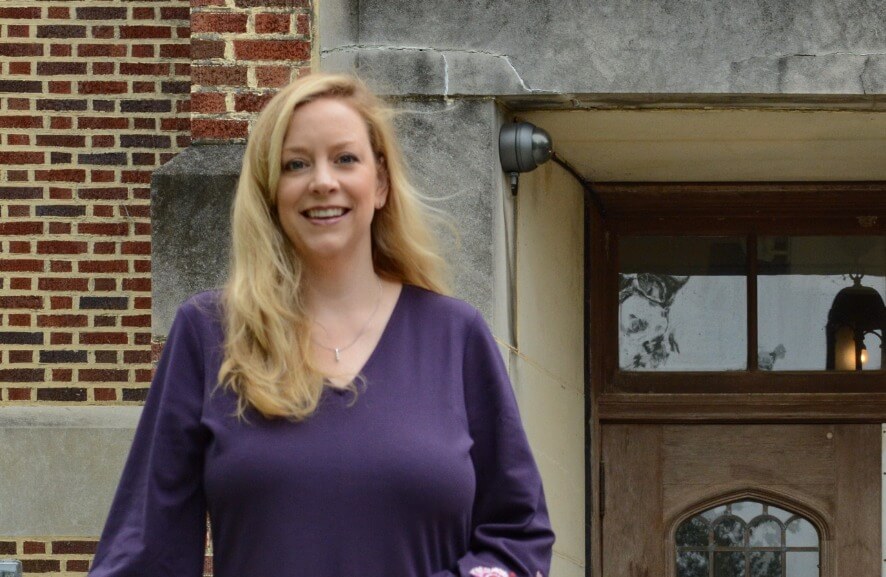 Despite inroads society has made closing to gender gap, young women entering college in the early 1990s walked the fine line between allowing their ambition and intellectual prowess shine and carefully avoiding appearing “too aggressive” or “unladylike.” In many high school, males were still noticeably favored, encouraged to pursue lofty career goals and to zealously compete for what they wanted. Females … not so much.

Fortunately, for lawyer-in-the-making Rebecca Bennett, there were a few scholastic institutions that did not buy into this hypocrisy, but rather encouraged young women to explore all their options, openly pursue their dreams and embrace their intellectual ambitions without fear of reprisal. For Bennett, this haven of support was Saint Joseph Academy.

Today, as a shareholder in the esteemed law firm of Olgetree Deakins, Bennett is an acknowledged leader in the areas of labor and employment law. But, she has not forgotten the support and encouragement she received not just from her parents, but from the sisters and fellow students of Saint Joseph Academy.

“I completely credit the education and environment of Saint Joseph Academy with many opportunities I’ve had,” says Bennett. “It was such a foundation for me particularly in compassionate leadership and living a life of service. It was a transformative experience for me, being first-generation college students (my sister and I) it seemed as soon as we entered those doors, just because we were part of this community meant we were going to be able to pursue bigger goals.”

Bennett points out that Saint Joseph Academy is an allgirls school run by the Congregation of Saint Joseph. “It’s a religious women’s organization with sisters who were inclusive before anyone was using that term; it’s just in their DNA,” Bennett explains. “They teach you to challenge authority, to seek justice and to be an agent of systemic change for whatever it is that you see in the world that isn’t right. It’s something that I wish everyone had.”

These were lessons Bennett learned well and has utilized throughout her life. Not surprisingly, while Bennett gives generously of her time and abilities, Saint Joseph Academy is at the top of the list. As a member of the school’s board of directors, she has strived to give back to the institution and people who so impacted her life.

“It’s essentially delivering on the mission of the school,” she says. “And that is, to provide this transformative education to young women in Cleveland and Northeast Ohio. Right now, I’m involved in the Capital Campaign, raising funds to renovate a part of the campus that was the former Mother House for the sisters of Saint Joseph. It’s a very meaningful project for me because, instead of tearing down the historic building, we are going to repurpose it and continue on the mission of these truly great women.”

Given this strong background, emphasizing service and compassion, it’s easy to understand how Bennett has built such a stellar reputation in her law practice as well as weaving her talents through myriad charitable organizations.

As she notes, the Sisters of Saint Joseph are not only progressive in teaching and guiding their young wards, they are, and always have been at the forefront in supporting issues plaguing our society.

“The school is just one of their many ministries,” says Bennett. “These sisters are strong, amazing women who are active in causes like healthcare, poverty and human trafficking. It’s really impressive; these women have dedicated their lives to serving their neighbors.”

Bennett shares this sense of commitment and dedication, not only with her work on the Saint Joseph board of directors, but in a variety of ways. For instance, in October, she will assume her role as president of the Federal Bar Association Northern District of Ohio Chapter, where she plans to support and advance its mission which is in perfect alignment with her own.

“Its mission is to serve the needs of the federal practitioner and the federal judiciary,” she says. “One of the goals of the federal judiciary is to make sure that all types of persons have the same access and opportunity in the courtroom. As you get to the upper level of federal litigation, there is a noticeable scarcity of women representing clients in bet-the-company matters. I would like to see our organization get involved in advocacy programming to continue to break down barriers.”

This pervasive sense of equality and justice is powerfully evidenced in Bennett’s practice representing management in disputes as well as advising clients through workplace crisis events requiring swift and thorough action. She also handles data privacy and unfair competition matters.

“It’s primarily employment litigation and traditional labor but also includes counseling and advice to employers for complying with the laws so that they can reduce risk.”

Her proactive approach and ability to educate clients as to the numerous potential pitfalls has resulted in Bennett being in high demand as a lecturer and guest speaker in the areas of labor and employment law. She’s also created and presented comprehensive compliance training seminars for employers.

Four years ago, this dynamic attorney was asked to join the preeminent firm of Olgetree Deakins.

“It meant moving to a firm with an international platform,” she says. “Olgetree Deakins is a labor and employment firm. That’s all we do. As a result, we’re able to serve clients that have employment needs throughout the United States and the world.”

Labor and employment law has been Bennett’s focus since accepting her first position right out of law school. It’s an area of the law that resonates with her and can be traced back to her childhood.

“My dad had two different but similar careers,” she says. “The first was as a printer for American Color. As a union member, he served in leadership roles. We would go to union picnics and it seemed there were always conversations surrounding the union, their struggles and successes.

“When the plant moved to Kentucky, my parents had to make a decision – uproot the family and follow the company or try a new venture on the management side. Ironically, that put my father on the other side of the table negotiating on behalf of management. I definitely had a front row seat to both sides of labor and employment.”

Passionate about causes that empower women and promote diversity and inclusion in the workplace, Bennett chaired the women in the law section for the Cleveland Metropolitan Bar Association in addition to her many other commitments. While her calendar is always full, Bennett says she feels very comfortable with the harmony of the life she and her husband pursue.

“My husband, Mark, is a federal prosecutor, so he certainly understands the demands of the practice of law,” she says.

She credits Mark for making her a better lawyer, mother and friend.

“Of course, it helps that the Olgetree Deakins culture is such that while we take our work and our clients very seriously, the atmosphere is very down-to-earth, inclusive and friendly. It makes a tremendous difference, for which I’m grateful.”