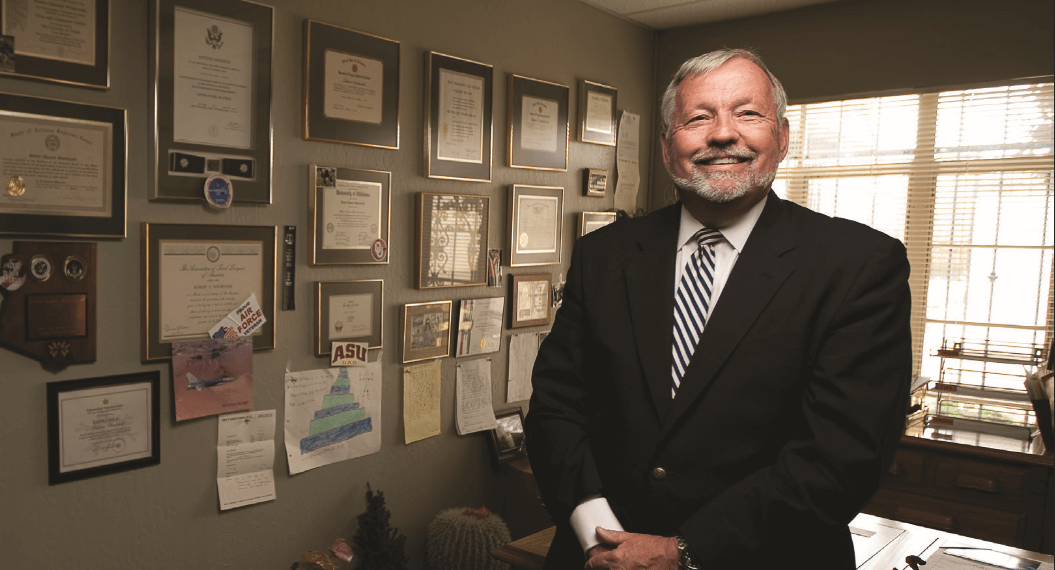 Since appearing in this magazine five years ago, a few things have changed, yet many things have remained the same. For one, as a new development, Robert “Bob” Wisniewski has graduated to the cover of this magazine yet he still provides the same personal client service. All workers’ compensation clients pay the same statutory fee for services. There are many Certified Workers’ Compensation Specialists in Arizona. What makes representation by Bob Wisniewski different? As a Certified Workers’ Compensation Specialist, Wisniewski has said reputation plus experience equals results.

“Litigation is the only way people can get benefits,” he says. “If you’re not willing to go to hearings, insurance companies will not take you seriously.”

According to Wisniewski, many workers’ compensation attorneys are afraid to litigate.

Over his 40 years of experience, Wisniewski has successfully handled thousands of workers’ compensation cases, litigating over 10,000 Industrial Commission administrative hearings throughout Arizona. During this time, he has litigated in every county of Arizona. Undoubtedly, he has handled more workers’ compensation cases than any other Arizona claimant’s lawyer. He maintains offices in Maricopa, Yuma, Gila and Mohave counties.

Hurt on the Job, Call Bob!

On the job injuries severely impact the worker and his family. Wisniewski’s duty to his client is paramount.

“I try to give the best service, to speak for the injured worker who cannot speak for himself,” Wisniewski says. “I set high standards for my clients, myself and my staff. We apply those principles of honesty and integrity when dealing with opposing counsel. I let my clients know we focus on what is important, gathering all required evidence. Understandably, injured workers oft en personalize their case assuming the insurance company is doing harm only to them. That does not help their case, as they oft en do not understand what needs to be proven.

“The process is difficult and can be frustrating for clients because they are the less educated blue-collar workers oft en with language and communication difficulties,” he continues. “I work with my clients to accurately present the facts to the judge in a well-prepared, forthright manner.”

Despite practicing for 40 years, Wisniewski remains as dedicated as ever.

“I know every detail of my clients’ case,” he says. “I’m with them from the initial interview through all the hearings. The firm has become the lifeline for hundreds of injured people across Arizona.”

Indeed, Bob Wisniewski has been recognized by his peers, selected in 2015 as a Fellow of The College of Workers’ Compensation Lawyers. Wisniewski is the only claimant’s counsel in Arizona to be so recognized with this peer-vetted designation.

Most of the firm’s business referrals are from other attorneys. “Lawyers confidently refer cases to me, recognizing my skill, my many years of experience and that I do the best for the client communicating with them and presenting the most effective case possible. A good portion of my referrals come from satisfied clients as well,” he says. “A referral from a former client means more to me than any award recognition. It reflects the former client’s trust and endorsement!”

With such an extensive reputation, Wisniewski is frequently invited to lecture to lawyers statewide, sharing his expertise in workers’ compensation and liens. He has testified as an expert witness in state and federal courts. Occasionally, lawyers hire him to compromise insurance company liens. At times, he represents uninsured employers.

Developing a special expertise in handling post-traumatic stress disorder (PTSD) cases has proven effective on behalf of his clients and has influenced existing law. Wisniewski successfully litigated the first case acknowledging PTSD for a law enforcement officer. Presently, many police and fire unions refer their members to him for injuries including PTSD claims because of this recognized expertise.

Wisniewski notes, “I treat all my clients the same whether professional athlete or an everyday laborer. Not only have I been the lawyer for my clients, many have become longtime friends. I’m approachable; I tell my clients, don’t call me Mr. Wisniewski, I’m Bob. In fact, if you are ‘Hurt on the job, call Bob!’”

A Tradition of Service

The son of a refinery mechanic, Wisniewski understands the value of hard work. Working his way through college at several labor jobs, he appreciates the struggles of the working man. Aft er earning his Bachelor of Arts in political science and a master’s degree in public administration, Wisniewski served four years as an active duty Air Force Officer, concluding his 22- year military service as a Reserve JAG officer. He credits this experience with giving him the tools to run a successful, independent practice.

“The military gives you lots of responsibilities,” he says. “You have to be a self-starter without a lot of direction. You are held responsible for what you accomplish. A successful mission is the goal. It is no different in a client’s workers’ compensation case.”

Following active military service, Wisniewski graduated from the University of Toledo College of Law on the GI Bill and relocated to Arizona in 1976.

“I came for the weather like everyone else, and I recognized opportunity.”

Change of Heart – Justice for the Injured Worker

Though he claims never to have heard the term workers’ compensation in law school, it seemed to be a natural path for one with Wisniewski’s background, values and strong desire to help.

Interestingly enough as his career advanced Wisniewski found himself working both sides of the aisle – representing insurance companies and injured workers. However, he found it increasingly difficult to straddle these opposing areas and recognized he had to make a choice.

“It became very hard to continue to represent insurance companies,” he says. “I decided I want to represent real people.” These diverse experiences have given him the advantage of insight into the thinking of the opposition. Since his days as a newly minted lawyer in 1976, Wisniewski’s career has been split between working in small, medium firms, a national firm and finally his own practice. Through it all, he has always been involved in workers’ compensation. As he converted his practice exclusively to injured workers’ representation, he made the decision to go into business by himself. By operating independently, he was able to produce positive results for his clients.

“I did not want to be responsible for others not doing their job,” he says. “When people come to me I can guarantee they will get my personal service and representation. One thing that has changed dramatically since my last appearance in this magazine is that our practice is more diverse representing Hispanic clients and other minorities. I am assisted by my knowledgeable and capable bilingual staff; they have almost 100 years of experience and ensure the best client service. Most of all my staff has been with me for decades. We work hard for our clients.”

Wisniewski has never looked back. He has truly found his niche in a practice that works best for him and the injured workers of Arizona.