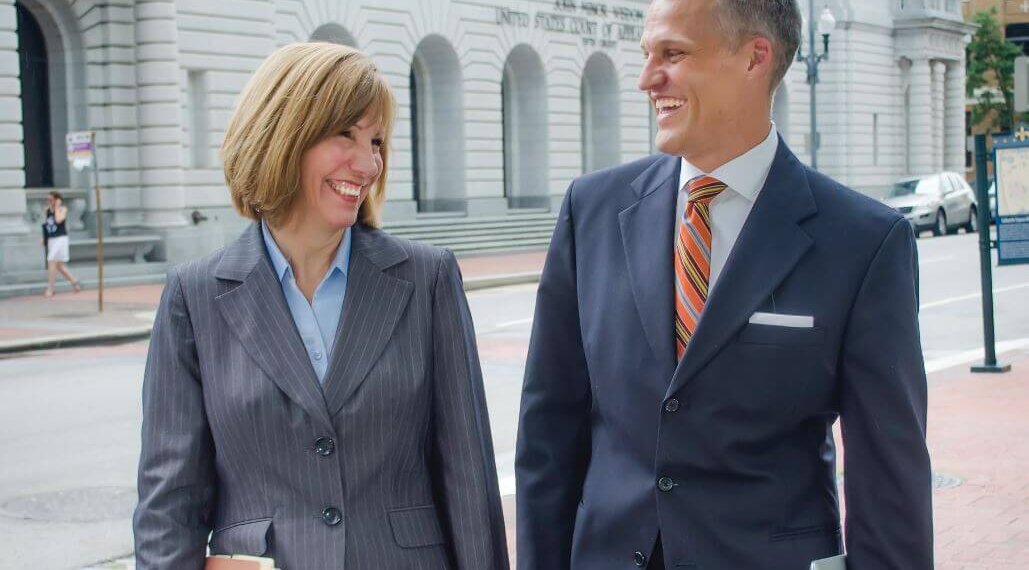 Shirin Harrell and Eric Nowak share a unique blend of values, experience and vision that make their small firm a powerhouse contender in the arena of plaintiff ’s litigation.

Harrell began her career as a licensed registered nurse. “I came to New Orleans in the early ‘80s to work at a rehabilitation hospital as an RN. I wanted to be a nurse from the time I was little. I stayed in nursing for a long time and worked in many different areas of the medical field. Then I decided to move into the business, rather than the clinical aspect of health care,” Harrell said.

During her outstanding medical career, Harrell served as a vice president of Mercy Baptist Medical Center and then of Pan American Life Insurance Company. She made the decision to attend law school at Louisiana State University in 1999. “LSU had the best bar passage rate and a good platform for law in Louisiana. As a nurse, one of my objectives has always been to help people. I felt that by going to law school, I could use my new legal education along with my medical experience to assist people through the legal system.”

Nowak began his career as a health care underwriter. “It was all about the bottom line. I wanted to find a job where I could make a real difference for people, not just treat them like a number. To me, being a lawyer meant being involved in making meaningful decisions for people, and I always knew I wanted to be a trial lawyer,” Nowak said.

Nowak earned a scholarship to the University of Texas School of Law and then was recruited to work for the prestigious litigation firm of Hunton & Williams in Virginia. In keeping with his affinity for technical and scientific subject matter, he handled a number of products and premises liability cases for the firm. After three years there, Nowak and his wife decided to relocate back to her home city of New Orleans.

Harrell and Nowak joined the firm of Sessions, Fishman & Nathan in New Orleans at around the same time and were eventually assigned to work on the same litigation team. “I instantly knew we worked well together,” Nowak remembered. “We shared a similar work ethic and a dynamic approach to law wherein we both immersed ourselves in the cases and the science behind them.”

“Sessions hired me as an associate right out of law school. The partner I worked with was also a former RN, so I naturally started working on cases involving medical issues. Then Eric and I were assigned to work on the Novartis Pharmaceuticals Phenylpropanolamine cases, where we worked closely together for nearly two years,” Harrell said.

Harrell and Nowak both gained extensive, practical experience defending Novartis in a case which involved over 900 plaintiffs statewide. “I learned very fast by taking depositions of experts and plaintiffs in a very condensed time frame. I gained a lot of handson experience and learned a great deal about how these large cases work,” Harrell said.

“I was very fortunate that in both law firms I worked for, I was involved in some very large cases that threw me into the fire of depositions, hearings and trials at an earlier stage of my career than many of my peers,” Nowak said.

From their early practice experience, both Harrell and Nowak gained insight into the thinking and strategies of big defense firms, knowledge that makes them effective plaintiff ’s litigators today. According to Harrell, she recognized early on that she preferred to work on the side of individual plaintiffs rather than defending the interests of large entities, and as a result, she made the decision to leave Sessions and start a plaintiff practice. “Eric and I joined forces in February 2004. We wanted to focus on making a difference here locally and being a part of the fabric of New Orleans and Louisiana. We wanted to be in control of the kinds of cases we took and the ones into which we would put our sweat equity.”

“We both knew that we liked cases where we represented everyday people in Louisiana, where we felt appreciated for the value we were bringing to people’s lives,” Nowak said. “By starting our own firm, we could also take more risks. Shirin and I have the freedom to take a case that might be complex or involve novel legal issues because we think it is a case that needs an advocate.”

They’ve put their formula to work for over 10 years. One of their most notable cases started in 2005, when the firm was approached by Michelle Marshall, a woman of modest means who claimed that she, her family, and neighbors had been exposed to caustic particles during a site reclamation and cleanup undertaken at an Air Liquide site in her neighborhood.

Nowak explained, “We were ultimately appointed by the court to represent the neighborhood in a class action that encompassed a one-mile radius where 10,000 people lived and 4,000 people worked. The company had developed a plan to safely remove the dangerous materials, but chose to deviate from that plan. Our investigation showed that over a period of at least six months, dust exposure occurred that caused a range of health problems including skin irritation, breathing problems and eye issues. The case embodied extremely scientific, complex issues and required the testimony of numerous experts.”

In addition, Air Liquide was insured and defended by one of the largest insurance companies in the world, who in turn hired some of the largest and most respected firms in the city to litigate the case. In a modern day David vs. Goliath scenario, Nowak recalled that at one hearing he and his partner faced 30 lawyers representing the defendants.

Adding further drama to the circumstances, Katrina hit only a few months after the lawsuit was filed. The client possessed photographs that were pivotal to the case, which she left behind in her New Orleans East apartment when she evacuated – an apartment that had taken over 5 feet of water. “Without the photos we were not sure that we could prevail,” Harrell recalled. “Eric went over to her apartment and crawled through a hole in the wall. He called Michelle to ask where she thought she had left the photos, and miraculously, he found them in a bright green plastic photo album sitting on top of the debris.”

The case was concluded this year with a significant settlement for the neighborhood.

“From one lady looking for help, we were able to identify the extent of the problem and demonstrate for the court that the chemical exposure had a significant impact on the community,” Nowak said. “When we called one of the plaintiffs to tell her about her specific award, she was in tears. She thanked me and Shirin for not only fighting on her behalf, but for the vindication of her neighborhood. This occurred in a bluecollar, working-class neighborhood, and when they complained, nobody would take them seriously. What matters most is that we made a difference here. It is not just about the money – what is important is that somebody listened and showed that these people were right and an injustice had been done.”

According to Harrell, she and Nowak understand the inner workings of large defense firms, and are not intimidated. That confidence is further enhanced by the compassion they feel for the people they represent. “One of the reasons we started this firm is because we want to know our clients personally. We consider them partners on our cases, and we take a very personal approach to our representation.”

“We have been in those big firms and big conference rooms,” Nowak said. “Even if there are hundreds of lawyers in the opposing firm, we are confident in the legal team we have built at Harrell & Nowak.”