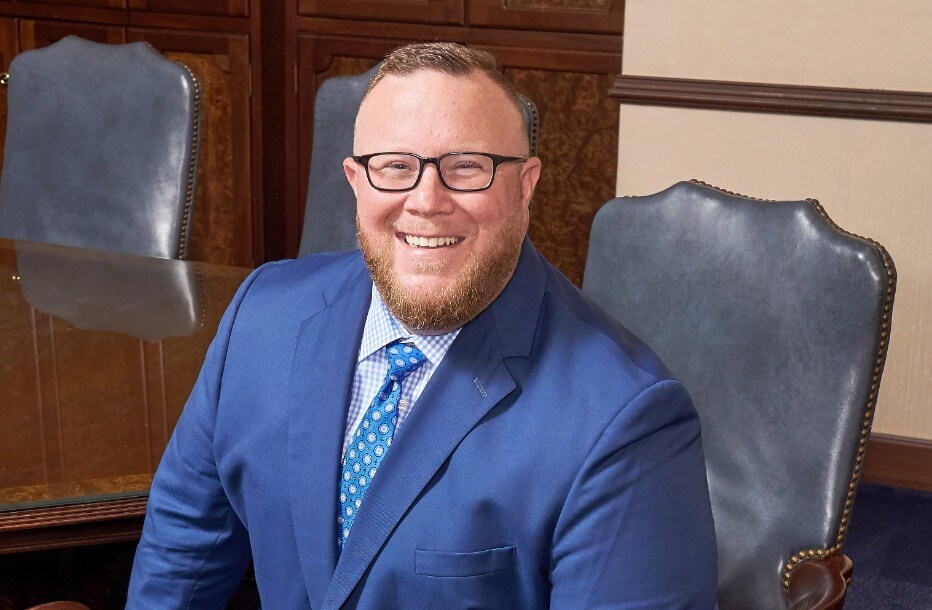 Always at the ready, Dan Iracki is a results-driven, dynamic and principled attorney who champions not just his plaintiffs’ causes, but the very laws designed to protect them. Regardless of the circumstances or complexity of the case, Iracki ultimately believes in our justice system and that the courtroom offers a level playing field where truth can still be heard over the din of power and money.

The youngest named partner in Coker Law’s 40-year history, he is one of the youngest board certified civil trial lawyers in the state, and Florida’s youngest member of ABOTA, an elite, invitationonly organization recognizing the best trial attorneys and judges.

Fearlessly tackling any opposition regardless of size or depth of their pockets, Iracki has more than 50 civil jury trials, resulting in combined total judgements and verdicts in excess of $52 million (nearly half of these multimillion-dollar verdicts).

“I didn’t become a lawyer to sit behind a desk and settle cases,” he says. “A trial lawyer takes the battle to a jury and empowers them to turn an injustice into a justice. I am a trial lawyer.”

This is just one of the many reasons he and Coker Law are such a perfect pairing. Most importantly, their philosophy and proactive approach to seeking justice corresponds precisely to Iracki’s.

“Our firm really focuses on and takes pride in our trial work,” he says. “In our current litigation environment, it is rare to see a firm that is consistently trying cases and obtaining substantial results.”

Like many successful athletes, Iracki credits some of his strengths and strategies to team sports. While attending Duquesne University for his undergraduate degree, Iracki played middle linebacker on their NCAA Division I-AA football team – a team that won the NCAA Division I-AA Mid-Major National Football Championship in 2003.

Athletics do provide excellent training in discipline, dedication and exploring one’s own strengths and weaknesses. In Iracki’s case, his position as middle linebacker is remarkably similar to his work today. A middle linebacker is described as the central anchor point in any good defense and frequently referenced as the “quarterback of defense.”

A cohesively strong team attitude and carefully prepared strategies are also integral to success on the field or in the courtroom. Iracki definitely recognizes a direct correlation between his many years playing sports and the numerous dynamic and effective tools he uses every day in his practice.

A notably successful litigator, Iracki admits that being in the courtroom, representing his clients, is his favorite part of practicing law. He also draws a very clear and convincing parallel between this and sports.

“I played football and other sports throughout my life and I see so many similarities between the two,” he says. “For instance, nobody goes to practice just to practice; you go to practice to prepare for the game. Preparing a case for trial and being in the courtroom is so much like preparing for the big game. The manner and level of ‘practicing’ that you do can be directly measurable to whether you will succeed at trial. As my mentor and senior partner, Howard Coker, has always told me, ‘Failing to prepare, is preparing to fail.’

“Just like in sports, being in the courtroom, being in the ‘game’ and being competitive … when you win there is no greater high,” he says. “Especially when it’s a particularly hard, uphill battle and you know you’re on the right side. Of course, at the same time, there’s no greater low when you lose.”

Naturally, there’s not an attorney in the world who enjoys losing, but even here, Iracki has an unusual and positive attitude. “If you never lose a case, then you aren’t trying enough cases.”

PUT ME IN COACH!

Just like his glory days, Iracki is always ready to get in the game. His “workouts” ensure that he’s always in prime condition and at the top of his game. The biggest difference these days is that the prize is so much greater. Rather than taking home a trophy or sporting a new championship ring, Iracki’s victories these days can literally be a matter of life or death. Someone whose injuries are so extensive that they are condemned to a life of permanent and progressive pain, lifelong care or worse might consider the option of checking out altogether rather than just existing. These injuries also have a ripple effect on the clients’ families and loved ones.

“I represent people who have been injured, or even killed, due to the negligence of others. So, we’re usually suing insurance companies, and not just for lost wages or medical bills, but also to let our client’s voice be heard as to how this trauma has impacted them personally and emotionally,” Iracki explains. “It’s a great thing to be part of. We have the chance to really change someone’s life.”

Success and helping others is something it seems Iracki came by naturally. With parents who are both preeminent doctors – his mother a breast cancer surgeon and his father a pulmonary disease specialist – it’s not surprising that he would have high standards in his own career.

Ironically, as the son of two prominent and in high demand physicians, Iracki’s choice of career was guided in part by their example. Although he admires both very much and appreciates their skills, as a child observing their seemingly endless work schedules, Iracki determined that medicine was not the career for him.

“My childhood was often spent waiting in hospital doctor’s lounges or their offices and they both worked seven days a week,” he says. “I’m very proud of both of them, but I decided at a very young age that was not for me!

“I eventually decided I wanted to be a lawyer, but now realize I work just as hard and as much as they did and do,” he adds with a chuckle.

His decision to enter the legal profession was gradual, but he can pinpoint an event in middle school that initially sparked his interest.

“We held a mock trial,” Iracki recalls, “and I was assigned the role as one of the attorneys. I discovered I really enjoyed that. I loved presenting the facts to a jury and it seemed more exciting because you’re performing, and at the same time you’re representing someone or some entity. Everything about it appealed to me. I knew for certain that sitting behind a desk all day was not what I wanted.”

Actually, given his history and personality, it seems a fair assumption that it wouldn’t matter what career path Iracki chose, he was destined to be hardworking and zealous. It just happens that fighting for a cause he believes in fits perfectly with his personality and talent.

In fact, Iracki has had, in a relatively short time, a fascinating and diverse life. Prior to joining Coker Law, Iracki clerked for the U.S. Army Judge Advocate General Corps at Fort McPherson and the U.S. Attorney’s Office for the Middle District of Florida. He also created and participated in an externship with the legal adviser for the Jacksonville Sheriff’s Office, is a graduate of the police academy in Pittsburgh, and spent five years as a volunteer firefighter in Pittsburgh, Pennsylvania.

Iracki also had an exciting opportunity with the infamous JAG arm of the military. “While in law school, I received a commission to the U.S. Air Force JAG,” he says. “I had interned with the U.S. Army JAG between my second and third year, and when JAG offered me the commission at the beginning of my third year, I thought that was what I was going to do.”

That’s when another mock trial once again changed the course of his life. “One of my coaches from the trial team – a wellknown civil trial lawyer here in Jacksonville – said, ‘Instead of going to JAG, come work for me. You’ll have to learn civil law anyway.’ So, I did, and it turned out to be one of the best decisions I’ve ever made. He was known for trying a lot of cases, at least 10 to 12 cases a year, and it offered me an amazing training experience and prepared me for the work I do today. That experience led me to Coker Law and the rest is history.”

These days, Iracki’s life is even fuller with his beautiful wife, Amy, who he met one week before starting law school, and their two (soon to be three) sons.

“We have two great boys: Hudson, 5, and Barrett “Bear,” 2, with another one due any day,” he says, beaming with pride. In fact, by the time this goes to press the Iracki household will undoubtedly include their newest arrival.

“I feel very blessed,” says Iracki. “I have an amazing family, great friends, wonderful colleagues and a career that keeps me excited and engaged every day.”