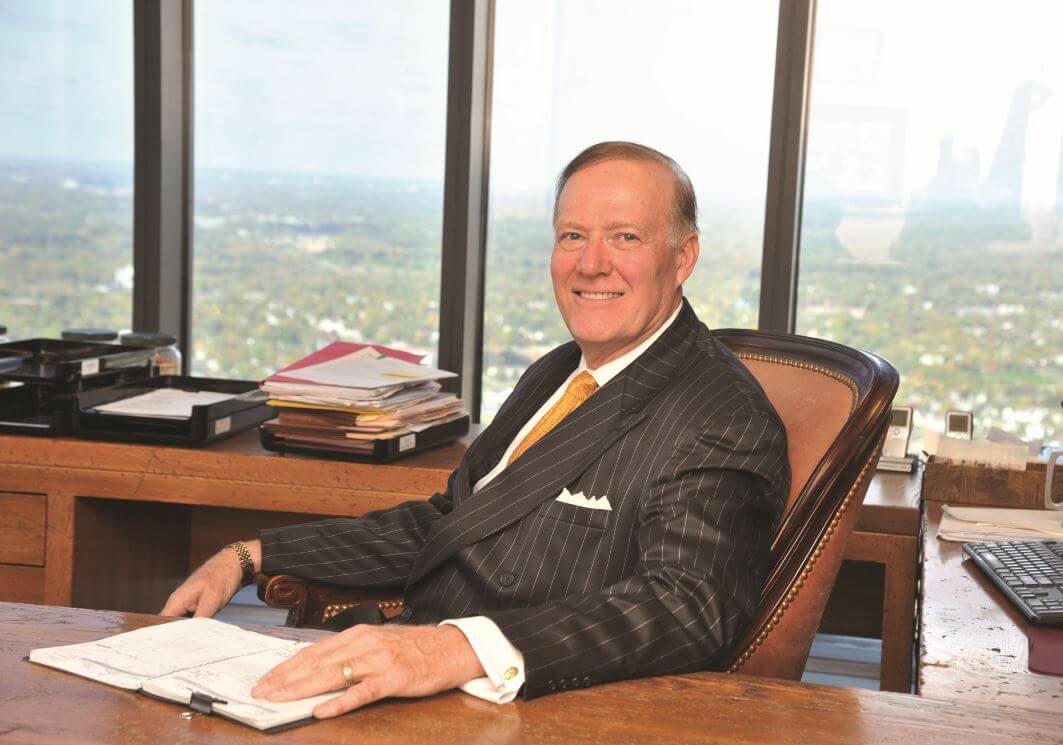 J. Michael Dady is a celebrated trial attorney who his prairie wisdom and good old-fashioned commonsense to business and to the courtroom. He is one of the nation’s leading franchisee lawyers and a founding partner at Dady & Gardner P.A., an award-winning firm, dedicated to helping franchisees and dealers nationwide prosper in an ever changing business landscape.

Dady’s colorful history is integral to the evolution of his practice. He was born and raised on the Sisseton-Wahpeton Reservation in northeastern South Dakota.That reservation opened to white settlement in 1892, and his family has been there since 1897, when one set of his great-grandparents opened a general store, and the other opened a tavern. When prohibition ended, his Irish, tavern-owning grandfather acquired a Hamm’s Beer distributorship, later run by Dady’s father after his return from World War II.

Then an event occurred that would forever change the destiny of Dady’s family, along with his future legal career. In 1975, just as he was about to obtain his law degree at the University of Minnesota Law School, Dady received an ominous call from his father. Olympia Brewing Company had just purchased Hamm’s and proceeded to send notices of termination to 251 Hamm’s distributors around the country, including Dady’s father. “He got a notice saying, ‘You’re done in 30 days,’ so he called me. He asked if there was anything we could do about it.”

Dady went to see a law school professor, who told him there was nothing he could do. “When you see your family’s business about to be wiped out,” Dady said, “you’re going to get a second opinion.” And he did – his own. Dady hit the law books, reading every dealer termination case on record. “I had the sense that this wasn’t right. My family had been doing the job; they had always performed. Can you just yank the rug out from somebody who has been performing? I thought, ‘If it’s unfair, it should be unlawful.’”

Dady had not yet taken the bar exam, but with the assistance of his colleagues at his first law firm, Lindquist & Vennum LLC, a restraining order was obtained, preventing the announced termination of his father.The Dady family business was saved, and the case received national press. Soon other Hamm’s distributors came calling. “We represented 34 Hamm’s distributors in seven states. We settled a few years later for millions of dollars, with those who wanted to keep their Hamm’s distributorships, including my father, being allowed to do so,” Dady said.

During the subsequent eight years he spent practicing under the tutelage of his two early mentors, Ed Glennon and former Minnesota Supreme Court Chief Justice Robert Sheran, Dady successfully represented parties on both sides of dealer termination disputes. However, after doing so, he decided that he wanted to devote the rest of his professional life to helping people like his dad. He was most inspired by the plight of franchisees, dealers and distributors who were up against all-powerful franchisors and suppliers. Dady became a national voice for those people who wanted to either preserve their business relationships or terminate bad relationships and receive fair compensation for their losses.

In 1994, after advancing to senior partner at Lindquist & Vennum, Dady decided to follow his family’s entrepreneurial path and start his own boutique law firm dedicated to serving the interests of franchisees, dealers and distributors. Thus, a new chapter in the Dady legacy began, one that has manifested in a thriving firm of 10 franchisee lawyers who have helped clients in over 350 different systems to either preserve and enhance the value of their businesses, or to exit those systems on favorable terms.The firm and its attorneys are frequently recognized for their outstanding representation in franchisee matters. Among their many accolades, the firm has been repeatedly ranked among the Best Law Firms by U.S. News and as the Top Ranked Franchisee Firm in America by Chambers USA.

Dady and his colleagues have expanded the laws that protect their clients, both by helping to draft-statutes in multiple states and by achieving favorable judicial rulings. In terms of trends in the law applicable to franchisees, dealers and distributors, Dady is particularly proud of the hand he and his colleagues have had in developing the contract-in-law principle of good faith and fair dealing.This applies to the ongoing relationships which their clients have, imposing on both parties a duty to deal with each other in a good faith, commercially reasonable, and non-discriminatory manner. “Who could be against that?” Dady asks.

Dady is a cowboy renaissance man at heart, whose prairie inspiration is ever- present in his life and practice. His many passions include horseback riding, buffalo roundups, ranching, western dance and western art.These influences are evident in his firm’s website, which conveys a prairie flavor from its rustic aesthetics to its plain-spoken message. His law office, at the top of the IDS Center, is beautifully decked out in western décor and has been featured in magazines and on television, and is referred to as “the Ranch in the Sky.” It is designed to resemble his ranch on the Coteau des Prairies in northeastern South Dakota, a haven where he and his family spend many precious hours together. Dady’s wife, Kim, is a talented artist whose paintings not only grace his office and home, but have also been accepted into the annual auctions at the prestigious C.M. Russell Museum, where Dady serves on the board of directors. Dady is an avid philanthropist, who supports both the arts and humanitarian causes. He is a founding board member of the American Creativity Association, an organization that is a resource for learning and applying creativity and innovation across professional disciplines.

“One of the benefits of growing up on an Indian reservation is being around people who were raised in different ways with different value systems,” Dady commented. “People there have a different set of mores and folkways. I have the benefit of understanding people who come from other perspectives. I’m able to communicate with them and be with them in ways that resonate. My grandfather served Native Americans in his tavern when no one else would, my dad hired Native Americans to help us unload his trucks, and I was honored to have a Native American holy man offer to smudge my Two Star ranch. I’m grateful I have had the experience of living in a multicultural environment.”

“One of the benefits of growing up on an Indian reservation is being around people who were raised in different ways with different value systems.”

Dady’s many paths in life, from his early days on the reservation, to his aspirations of joining the priesthood, to serving in the military, to his distinguished career in the law, all converge on a common path. He is a man dedicated to furthering the interests and welfare of others. According to Dady, he has always embraced the words of the poet Robert Frost and “taken the road less traveled.”

He concluded with this bit of prairie wisdom, “One of my favorite professors in law school, Don Marshall, would annually tell his law students how fortunate we are to have chosen our profession as lawyers, since, by doing so, we will have the opportunity to take every single gift we have been given, develop those gifts to the fullest, and be of service to folks who desperately want and need our help, and to make a real difference in their lives. I can now say that, in choosing to devote my professional life to helping people like my dad, who desperately need and deserve our help in resolving their significant disputes with their franchisors and suppliers, I have found the type of fulfillment and satisfaction that Professor Marshall described. I look forward to continuing to experience that for many years to come and, in the process, to do my best to be the type of mentor to the young lawyers in my firm that I had as a young lawyer, to whom I will always be so very grateful.”

J. Michael Dady is a celebrated trial attorney who brings his prairie wisdom and good old-fashioned commonsense to business and to the courtroom. He is one of the nation’s leading franchisee lawyers and a founding partner at Dady & Gardner P.A., an award-winning firm dedicated to helping franchisees and dealers nationwide prosper in an ever-changing business landscape.