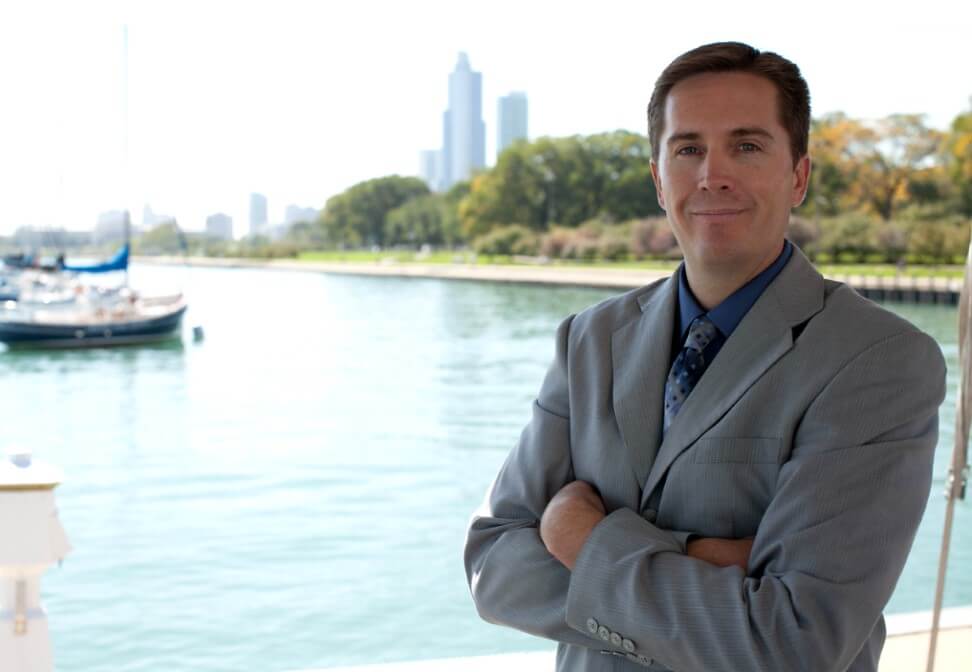 Chicago lawyer Jared Staver has seen all too often how an accident can change someone’s life in the blink of an eye.

Take the example of a 52-year-old man who was a passenger in a head-on crash in North Barrington, Illinois. An elderly woman who was driving in the opposite direction lost control, and her vehicle swerved across the center line. The resulting impact left the man with multiple broken bones and deep, disfiguring lacerations. After the crash, he faced months of painful recovery and a mountain of medical bills.

Staver took the man’s case and negotiated a settlement that gave the man nearly $900,000, and the comfort of knowing his medical bills would be paid and his family would be secure in the wake of his accident.

Compassion is at the heart of the philosophy underlying Staver’s law practice. He made a conscious choice to run a firm that focuses individualized attention on personal injury clients – people whose lives have been altered by car accidents, dog bites, slip-and-fall injuries, nursing home abuse or botched medical procedures.

He’s handled a wide array of cases, but he brings the same vigorous representation to every client regardless of the size of the case. “The firm is committed to achieving the best possible outcome for each client, under the unique circumstances of the case,” he said.

For Staver, representing personal injury clients isn’t just about the money – it’s about the peace of mind that successful resolution of a claim can bring to someone who has been seriously injured or who has lost a loved one to an accident.

Staver said the work he does helps families heal after an event that can seem small from an outside point of view, but can be catastrophic for the people who experience it.

Service to others is a cornerstone not only of Staver’s personal injury law practice, but his personal life. His firm’s motto is “Community. Commitment. Integrity.” He works to put those principles into practice in every aspect of his life, from his own family to his community involvement.

Staver hails from Aurelia, Iowa, a sleepy farming community of just over 1,000 people in the northwest corner of the state. It’s the kind of place where everyone knows everyone else, where people work hard – and work together for the good of their community.

Staver described the past and present residents of Aurelia as “salt-of-the-earth” people who understand the nature and necessity of community, and the deep commitment that goes along with building a strong community.

Staver was born the youngest of four siblings into a two-income, middle-class family, like many others in Aurelia. His father was a truck driver, and his mother chose a career in social work that allowed her to help others in their community. Each of their children performed work from a young age, instilling in them a lifelong work ethic that Staver said he has retained to this day.

Staver toiled from dawn to dusk in the rippling fields of his uncle’s nearby farm. As a boy, he pulled weeds so that crops could thrive and grow. When he was old enough, he was taught to drive a large tractor and to perform other types of labor around the farm. It was hot, hard, important work.

But just as important was Staver’s pursuit of education. He said his parents taught their children that education was the path to a good life, and they urged Staver and each of his siblings to seek knowledge. His mother herself attended college when Staver was a young boy – setting an example for her children, who would all go on to earn their degrees while paying their own way.

As a teenager, Staver also worked at Lake Okoboji, nicknamed part of the “Iowa Great Lakes.” It was during those summers that he acquired a love of hunting and fishing, and that he met attorney Bill Thomas, a family friend who would inspire him to pursue a career in law – a career that Staver said is more than just a profession, but a calling.

After high school, Staver worked his way through Iowa State University, where he studied political science and communications. He paid for school by working in a call center, where he provided information to potential students. He also taught conversational English to students from other countries, and delighted in learning about their far-away communities.

“It was my study-abroad program,” he said.

After finishing his bachelor’s degree, Staver went on to The John Marshall Law School in Chicago. He dove head-first into his new community and made Chicago his home.

While he was a law student, Staver got a job as a full-time law clerk at a personal injury firm. He worked in the firm during the day and took classes at night. He completely immersed himself in learning the law for three and a half years until he earned his Juris Doctorate. Then he struck out on his own and opened a law practice.

He knew as a young attorney that he’d need a mentor. He found Joseph Curcio, who had been practicing personal injury law in Chicago for many years. Staver said Curcio guided him through his early years in practice, offering him tips on everything from organizing an office to developing clientele.

He also helped Staver to understand the legal landscape in Chicago, including the judges and other lawyers he’d deal with in negotiations or in court. Curcio taught him to manage work flow, budgets and caseloads, and to understand the nuances of practicing law. Curcio also referred him cases that helped him gain valuable experience handling collections, contracts and personal injury claims.

Staver consciously wanted to take a handson approach to his practice, so that each person who comes to him for help can feel comfortable knowing that their case is being given the time and attention it deserves.

His background as a farm boy in Aurelia gives him a sense of solidarity with his clients, many of whom are the same kind of “salt-of-the-earth” working-class people he knew growing up.

“They’re hardworking people who have run into some bad breaks, and now they need our help to get back to where they were,” Staver said.

His typical client is someone who has been injured through no fault of his or her own, and who is finding that insurance companies are reluctant to provide compensation for those injuries.

“My clients are exercising their rights under the law. Sometimes they need a little help going up against these insurance companies,” he said. “If insurance companies always did the right thing, there would be less need for personal injury lawyers to get involved.”

Another cornerstone of his practice is the idea of giving back to the Chicago community where Staver has made his home. He is involved with a number of community and civic groups, including GiGi’s Playhouse, a nonprofit that provides programming for children and adults with Down syndrome; HighSight, an organization that provides scholarships, development, and college readiness preparation for underprivileged students in Chicago; and the BTB Foundation, which provides emotional and financial assistance to families suffering hardship because of cancer or related medical complications.

He also works to protect the rights of disadvantaged people through the Chicago Lawyers’ Committee for Civil Rights Under Law, and to promote values of democracy and equity through Public Citizen, a nonprofit funded exclusively by small businesses and individuals who believe in improving health and safety throughout the nation.

In 2014, Staver combined the philosophies of his practice and his commitment to community involvement by creating a scholarship designed to help a student who had been injured in an accident or was directly affected by someone else’s accident. The first $2,000 scholarship was awarded to student Tiffane King, who was injured by a stray bullet that left her paralyzed and facing years of daily, rigorous physical therapy. The scholarship is helping King pursue law studies at the University of California, Irvine.

“Law school is a monumental financial feat, and when you add the financial burden of living with a disabling condition, it can make obtaining a law degree seem impossible. Insurance covers just a mere drop in the bucket compared to what medical expenses amount to for a long-term condition,” King said.

According to Staver, they selected King out of hundreds of applicants to receive their first scholarship not simply because of her paralysis or her outstanding academic record.

“I just understand how difficult it is for any student to be able to pay for law school,” he said.