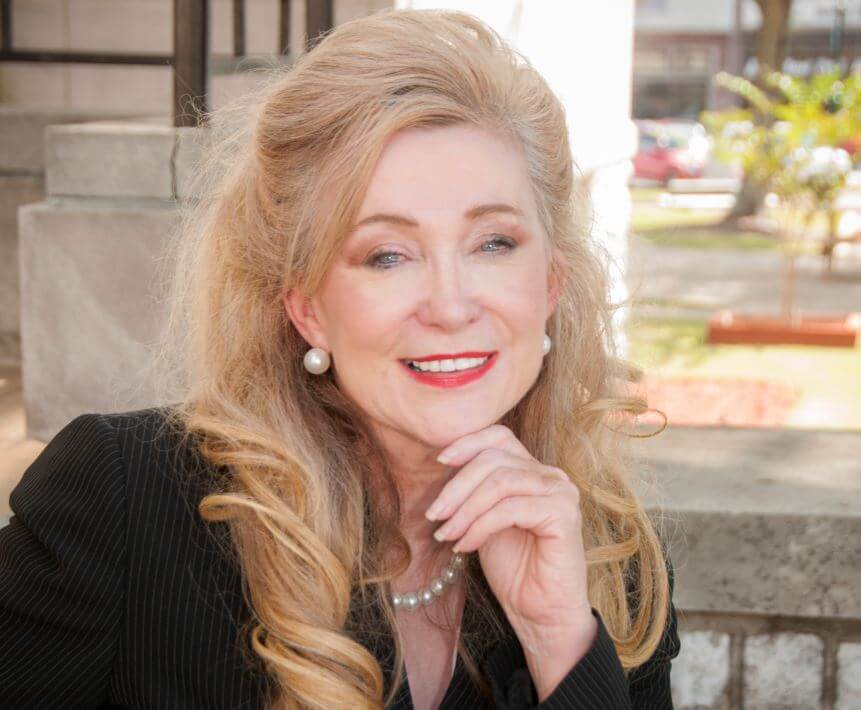 “Make it about helping people” might be considered Johnna Baker’s motto of life, the first page in her playbook. Johnna “The Problem Solver” Baker operates a busy sole practice. She’s a certified mediator, guardian ad litem and family lawyer whose offices are just steps away from the Walker County courthouse.

“I’m so close to it I can get over there on a rainy day without getting wet,” she jokes.

Baker has found fulfillment in several callings, each with the common theme of helping her fellow man. In her earlier years she found fulfillment as an educator, author, grant writer, and poet. Law as a second career is a thread that runs throughout her family of six siblings. Three immediate family members have chosen law as their second profession. Her only sister Patti Rush and her nephews will be enrolling in law school in 2019, rounding the tally to six lawyers in the family.

“Six lawyers around the thanksgiving table will no doubt make for interesting conversation,” said Baker.

Vivacious, charismatic and energetic, Baker exudes enthusiasm and a zest for life. She meets you with the warmth and charm of a southern lady – one gathers she could have played a role in “Gone With the Wind.” Baker belies the staid image oft en associated with the legal field. Aft er a few moments of exchange, you immediately detect that she is very proper, but at same time personable, with an air about her that lets you know she will not easily back down from solving a problem.

An admitted newcomer to the practice of law, only in her third year of practice, she is certainly not ill prepared. “Everything I did in life before my law career prepared me for this profession,” she says, leaning across her small, antique desk. Part of that is her academic credentials – she comes to the legal profession armed with a host of educational degrees and an arsenal of skills to the area of law called, “Domestic Relations.”

More than 30 years as a teacher and administrator in the Walker County school system laid a solid foundation for her later legal career, which she launched with Bachelor of Science and master’s degree in secondary education, adding an master’s degree in administration along the way. She peppered her educational experiences with minors in English, psychology and child nutrition, capping it all with a doctorate in educational leadership.

While working as a school administrator, Baker developed a reputation for meeting problems head on and working to bring quick resolution. As director of human resources, Baker oft en had to discipline employees and issue reprimands. She implemented a textbook documentation system that saved hundreds of thousands of dollars, and helped rescue the Child Nutrition Program that by 2011 had become virtually insolvent.

Baker applied her writing skills to the practice of grant writing where she wrote grants that brought hundreds of thousands of dollars for many programs including Community Education and an Aft er School Program. She also wrote manuals and pamphlets on 504 and special education.

She extended those skills to authoring several books, including two books of religious poetry. One, “Trusting God with the Journey,” she describes as a spiritual book designed to give guidance to those whose personal journey has been touched by heartaches and disappointments in relationships and job opportunities. Commenting on the book, she says, “I think the subject matter of the book is captivating, inspiring and emotionally charging. People have crises in their lives and this book will help pick them up.”

A LATE LIFE ATTORNEY AND SPEAKER

Baker’s dream as a child was to be an attorney. Asked at age 12 by her church pastor what she wanted to be when she grew up, she immediately answered “a lawyer.” But it would take most of her life to bring that dream to fruition. It would not be fulfilled until years later, attending law school at night while working a full-time job during the day. Baker graduated from Birmingham School of Law in 2005 with honors, but her need to complete her retirement in education prevented her from starting her practice until 2015.

Her experience and prominence has led to speaking engagements at school systems all across Alabama on topics including Bullying, Documentation, Conflict Resolution and Team Building.

Today she manages a full-time family law practice, with a specialty in domestic relations. Still holding to her “Problem Solver” motto, her favorite area of domestic relations is solving problems with custody cases. Baker feels, in some ways, that her practice is merely a continuation of helping children, a theme of her life. “In custody cases I have become a voice for children demanding justice.”

Still the consummate writer, Baker has just finished a book on the growing problem of bullying titled, “Please Don’t Bully Me – I’m Just Like You, Don’t You See.” A manual for teachers and parents, it includes and explains Alabama’s recently-passed statute on bullying. Using her love of poetry, Baker wrote and included in the book emotionally-charged poems that might be told by children with emotional and learning disabilities, or who live in broken homes.

Always available for speaking engagements, Baker explains that “The book changes the dynamic on how administrators handle bullying incidents. School systems need training on the topic of bullying and this new law.”