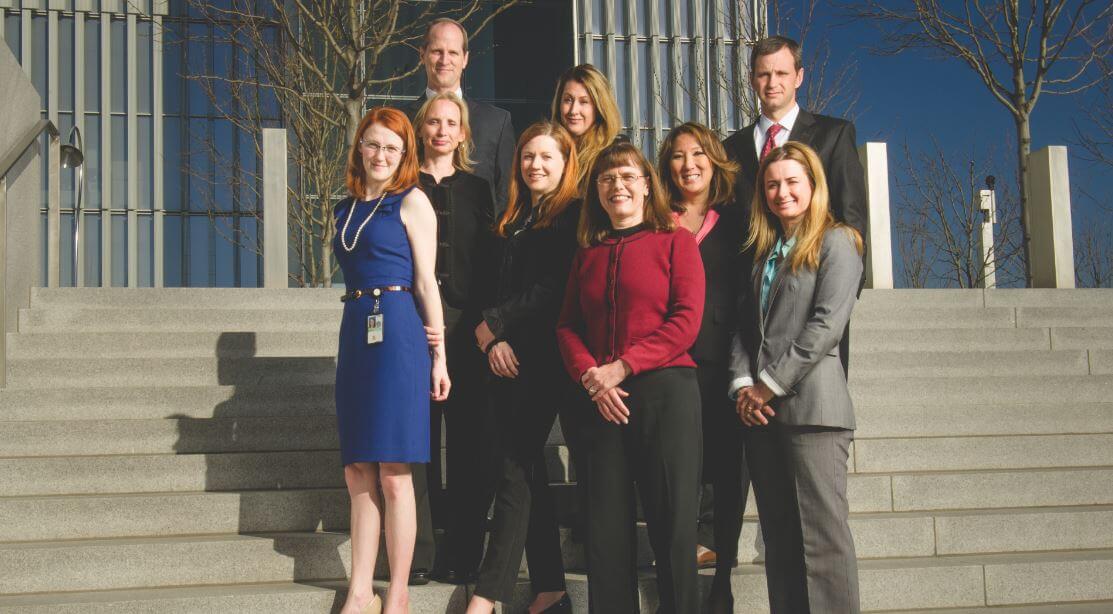 Karen Martinez and Cheryl Mori are both part of the 23-person legal team that works tirelessly at the U.S. Securities and Exchange Commission in Salt Lake City to bring justice and help recover funds for those duped by unscrupulous individuals and companies. The dynamic legal duo has the privilege of working together and furthering their professional relationship that has been a work in progress for many years.

The Road to the SEC Martinez was in private practice prior to working at the SEC. “Right after I graduated from law school I clerked for Christine Durham on the Utah Supreme Court. When my clerkship was coming to an end, a good friend from law school reached out to me and asked me to send my resume to her firm, Giaque, Crockett, Bendinger and Peterson. It was the only firm I applied to and I got the job,” says Martinez. The firm primarily handled securities, antitrust and complex commercial litigation cases. Her practice focused on representing accounting firms in large securities class actions. Her legal course was set for the future.

During her time at the firm, one of her clients, a Salt Lake City broker-dealer, had one of its representatives named in an SEC enforcement action filed in the Southern District of New York. “My client was not named in the enforcement action. There was a plaintiff ’s class action lawsuit that was filed at the same time, which included my client,” says Martinez. “So the SEC enforcement action and the plaintiff ’s class action moved forward on parallel tracks in front of the same judge. During the hearings it always looked like the SEC trial lawyer was having a lot more fun than we were and getting beat up a lot less by the judge!”

Martinez was convinced the SEC was the place to be. When a trial attorney position opened in the Salt Lake City SEC in 2002, Martinez landed the position and served as trial counsel from 2002 to 2010.

In the decade since, she has worked her way up to regional director at the Salt Lake City SEC. She has focused on litigating cases in federal court and in front of administrative law judges on behalf of the agency. She developed her litigation skills and knowledge of federal securities laws and the internal workings of the SEC. In 2010, she became assistant director and began supervising staff and worked heavily in strategizing investigative plans. When the former regional director retired in 2013, Martinez was promoted into the position. “In that position, I supervise the investigative staff, the team of litigators, the support staff and a team of examiners,” Martinez explains.

SEC Rulings Over the past several years the Salt Lake City SEC has brought many large fraud cases. “I think the American Pension Services case we filed in the district of Utah is particularly important,” Martinez notes. “It highlights for investors some of the risks that come along with engaging in self-directed IRAs.” That matter is currently pending before Judge Robert Shelby.

There have been a number of large offering frauds and Ponzi schemes. Some cases range upward of $150 million. “There is a lot of money raised in those kinds of cases and it has a devastating impact on individuals and families. One of the hardest things about the job is talking to investors that may have lost significant portions of their retirement,” Martinez states. The human toll on the backside of securities fraud is devastating to witness and is one of the reasons Martinez and Mori do the work that they do.

A Mentor and Respected Colleague Mori has been with the SEC since 2003. “I deal with violations of federal securities law,” says Mori. “We get a lot of fraud. My primary role has been to investigate matters and prepare cases for litigation.” Her journey to the SEC mirrors that of Martinez’s in some ways. After working as a flight attendant for several years, Mori was looking to do something more meaningful and thought that law school would present some unique opportunities for her and she decided to go for it. She never thought she would practice law in a courtroom but says that she owes a lot to Martinez for guiding her into a new career path.

“When I was in my second year of law school I did an internship with Christine Durham at the Utah Supreme Court which was where Karen clerked,” Mori says. Martinez worked with Mori directly while Mori was a student. “She taught me so much about being a good lawyer. I knew nothing about law school or the practice of law prior to going to law school. She was a great help and example to me. Karen also helped recruit me to the law firm where she worked so we worked together in private practice before the SEC,” Mori states.

“Karen was an amazing mentor and I was very lucky to have her there guiding me,” Mori explains. “I was able to get securities law experience and when Karen went to the SEC, I went to another law firm for a short time. A few months later, Karen called and said, ‘We need your expertise here.’”

Mori jumped at the chance to join the SEC team and was hired as a staff attorney doing investigation. Mori has since been promoted to senior advisor to the regional director. “I’m essentially Karen’s deputy. Beyond investigations, I now do a lot of administrative work and assist Karen with her regional director responsibilities,” Mori states.

“I’m very happy with what I’ve done and where I am and very glad I went to law school,” Mori explains and the fact that she’s been able to have Martinez as a mentor is a bonus. “It’s something that is particularly important for women in legal practice,” Martinez adds. “At the firm where Cheryl and I worked, there were no women partners. That can be very daunting especially as a young lawyer working in a law firm environment for the first time. It is important to have people that are going to encourage and help you. I was glad to fill that role. Cheryl is incredibly talented and obviously I convinced her to follow me everywhere.”

Scope of Work The SEC does see a wide variety of cases, but those involving fraud are most frequent. Martinez says, “Cases include anytime someone is attempting to sell securities to members of the public and making any kind of a misrepresentation or omission in the course of that sale. Typically speaking, the misrepresentations have to do with how they’re going to use the money, what it’s going to be invested in and the risk associated with particular investments. Most people understand risk and reward go hand-in-hand. If you are anticipating an extremely high return, then it probably has an extremely high level of risk attached to it.”

More often than not, the office sees individuals promoting securities by saying how safe they are, that there is little to no risk involved and promising a very high rate of return. “In some cases we’ve heard promises of 100 to 600 percent return,” adds Mori.

Martinez and Mori also see a lot of affinity fraud. “It’s people taking advantage of common social bonds, including church groups, ethnic groups or other social groups. In these close knit communities, individuals take advantage of the nature of the relationship and people suspend their natural hesitancy to believe things that sound too good to be true,” Martinez says.

In June 2014, the SEC relocated its offices to the new federal courthouse which recently was awarded the highest annual award from the American Institute of Architects, for excellence in architecture, interior architecture and urban design. The courtrooms have been outfitted with state-of-the-art technology to facilitate lawyer presentations to the court and to juries. “Being located in the courthouse has given our office a new visibility and allows us to have much easier access to court proceedings,” says Mori. “It has also been nice to see judges and other courthouse colleagues around the building, which allows us to get to know them on a more personal level. Courthouse personnel are always accommodating and happy to provide assistance with policies and procedures, training on courtroom technology, and insight into the workings and history of the court.”

Rewarding Work Working for the SEC is incredibly rewarding work according to Mori. “It’s definitely the work we do. As Karen mentioned, some of the cases we see can be devastating to people and we’re able to try and remedy those wrongs and prevent further harm from happening. We always feel like we’re the ones out there protecting people. I feel like we’re doing good and making a difference when we bring these cases,” says Mori.

Particularly rewarding is when a receivership is able to recover losses and get that money back to those who lost so much. “Sometimes it’s not recoverable and that is difficult. But the rewarding part is being able to bring those people responsible to justice,” Mori says.

After more than a decade of service, Martinez will be retiring this summer. Mori will remain as the senior advisor to the new regional director. “I feel extremely lucky to have had a legal career that I enjoyed,” says Martinez. “I did important work for the agency and participated in cases which returned millions to defrauded investors. I look forward to spending the next few years traveling with my husband. I know I leave the Salt Lake Regional Office in very capable hands.”