MavEryck Langford Stevenson: I Do It All And I Do It Well 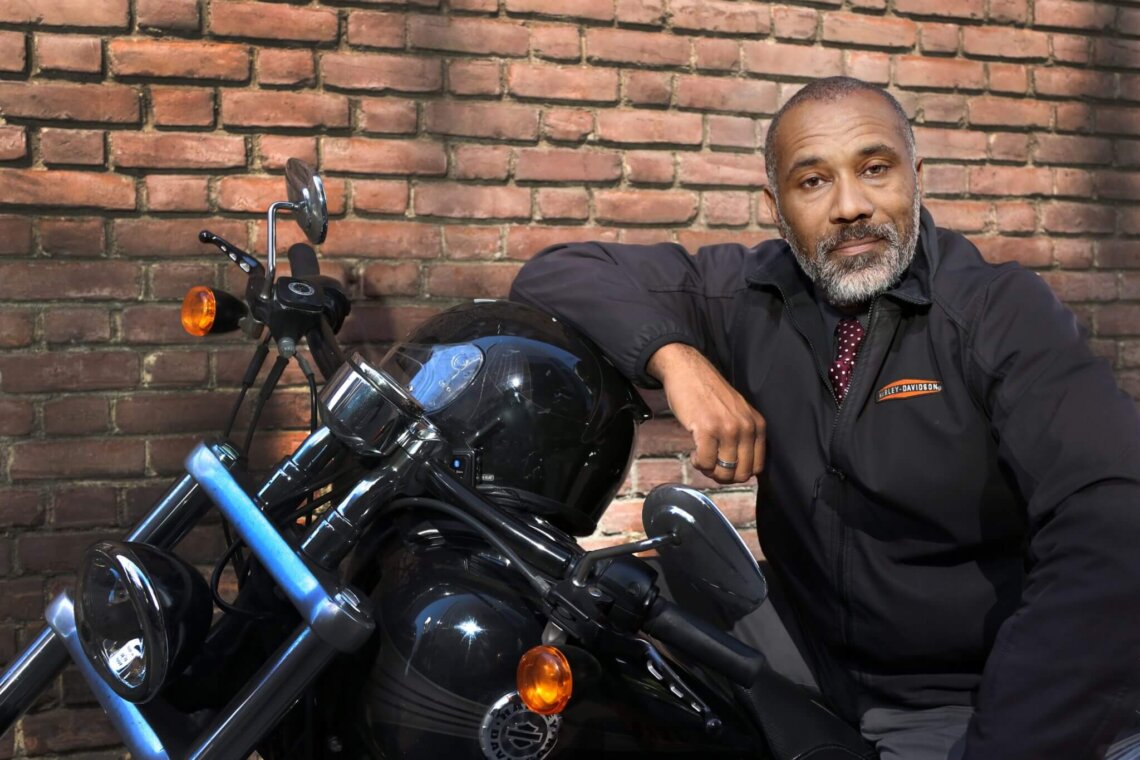 “I strongly believe laws were put in place to help us, not harm us.”

It’s emblazoned across the back of his leather biker jacket as well as his business card, yet people are forever asking MavEryck Langford Stevenson, “What’s your real name?” Truth is, MavEryck is his real name, but as he says, “It’s a long story.” Whether this was prophetic or simply serendipity, we’ll never know, but this rebellious adventurer has lived up to the moniker.

“It’s my legal name,” Stevenson assures, “and I guess it fits. In fact, it’s my whole persona. Maverick, in the traditional spelling means ‘one who will not follow the rules of a group, a total rebel.’ I’m fairly certain I’m the only MavEryck in the world.”

Certainly, he is one of a kind. Even his reasons for entering the legal profession are somewhat unique. It was the late ’90s and Stevenson had already served his country in the armed forces.

“When I was 17, I took an oath to defend this nation and I took that oath seriously,” he says. “I am a disabled veteran and received two honorable discharges from the United States Army.”

In fact, he’d been recommended and accepted to the highly selective and very prestigious 2/75th Ranger Battalion. There’s no doubt he would have excelled in the Army Ranger Battalion, but he was honorably discharged before he could reach his true potential.

That was 1989, fast forward to 1998 and Stevenson is playing in a popular rock band in Seattle, Washington, a city known for producing such legends as Pearl Jam, Soundgarden, the Foo Fighters and more.

“Our band had been signed to a recording contract with a record label,” Stevenson says, “and we really got the shaft. I remember thinking at that time, I wanted to make sure that other artists, performers or singer/songwriters didn’t end up with our plight. The best way to do that was study law.”

An avid biker, Stevenson says the perpetual rain of Seattle was not conducive to his daily rides so he gravitated to the sunny state of California where after earning an associate’s degree in liberal arts from Saddleback College, he completed his undergraduate work at California State University, Fullerton, earning a Bachelor of Arts in criminal justice.

“I completed two minors in political science and law, politics and society,” says Stevenson. “After undergraduate, I attended law school in Munich, Germany, where I studied comparative intellectual property law and then, completed my studies, earning my Juris Doctor from Loyola Law School here in Los Angeles, with a concentration in criminal justice.”

Already a proven military hero, musician and fluent enough in German to get along well with the locals in Bavaria, Stevenson now focused his intellect and talents on serving his newly adopted community. He’s worked for the Newport Beach City Attorney’s Office, where he was heavily involved in municipal law and assisted the city attorney in properly advising the city council and mayor. Stevenson also served in the California Employment Development Department.

“My job was to file claims for unemployment benefits,” he says, “in accordance with all applicable laws. However, I went above and beyond the call of duty and made sure that claimants not only received proper service but also ensured they did not get the short end of the stick, or just fall through the cracks. I made it my mission to make sure everyone got every dime they were entitled to.

“I strongly believe laws were put in place to help us, not harm us,” he continues.

Working for the EDD led to a job with the U.S. Department of Labor as a federal agent where Stevenson assisted disabled veterans in receiving benefits they were legally entitled to.

“In that position, I helped every disabled veteran I came in contact with, not just the ones who would make government progress reports look good at the end of the month,” he says. “I made sure those who were injured serving their country were treated like human beings and not just another number in someone’s report.”

Stevenson also worked for the Superior Court of California, County of Los Angeles as a judicial assistant trainee, where he says he learned about courtroom procedures, gained in-depth training and experience in both criminal and civil law, as well as becoming familiar with courtroom policies and procedures.

“I also gained a great deal of experience while working for Silver & Wright LLP, a private law firm,” he says. “I drafted numerous complaints and corporate summons in both the criminal and civil sides of municipal law, including extensive work with receiverships.”

While his original motivation for studying the law was to protect those in the entertainment field, given Stevenson’s vast and varied experience, it’s not surprising that when he decided to open his solo practice it would be as a general practitioner. Although, he is currently working with one very well-known performer.

“You know, in law school you memorize about one million laws to pass the Bar, but afterward most attorneys find one or two areas of practice in which to focus,” he says. “To me, that’s ridiculous. If I know the law, and can get myself up to speed to be competent in a matter of hours, why wouldn’t I take a case, regardless what area of law?”

In fact, Stevenson’s knowledge combined with extensive experience qualifies him to serve in a somewhat unique capacity as an appearance attorney. Obviously, there are times when an attorney, for whatever reason, simply cannot make a court date. Similar to a substitute teacher or doctor on call, Stevenson is one of handful of highly qualified attorneys who step in.

“I’m typically contacted the night before,” he says. “I never know what kind of a case I might be representing. I’ve been on everything from traffic violations to murder. As an appearance attorney, you have to stay sharp, up to date, and on top of things because you seriously do not know what you’ll be assigned until the very last minute. I take these responsibilities very seriously, it’s important that the attorneys I appear on behalf of know that I always have their back.”

Dan Chambers of Chambers Law Firm PC has availed himself of Stevenson’s services on several occasions. “I handle a lot of serious felony cases, and the trial portion can go on for an extensive period of time,” says Chambers. “When I’m tied up in one of these trials I feel confident that Mav-Eryck will step in on my other cases and represent both me and my clients expertly. He’s always done a great job for me.”

One of the most significant lessons Stevenson says he learned in law school was that the law isn’t always fair. Part of the assigned reading was a book called, “Whose Monet?: An Introduction To The American Legal System.”

“Essentially, there was a story about a woman whose Monet was stolen during World War II,” Stevenson says. “She had basically given up on ever recovering this valuable painting, but then when she was quite elderly, the painting was discovered and she was able to prove that it was indeed hers. It didn’t matter, the person who had purchased the artwork was a bona fide purchaser, so she had no recourse. That really bothered me, but it was also a valuable lesson.”

He might be a rule breaker and rebel, but for Stevenson justice is something that should always prevail. Every time he represents someone it becomes personal in the sense that he’s willing to do whatever possible within the legal parameters to see that they get the resolution they so desperately seek.

“It might sound cliché, but what I enjoy most about my job is making a difference, improving the quality of people’s lives,” says Stevenson. “Let’s face it, no one calls a lawyer to say, ‘Hey, just wanted you to know, I’m having a great day!’ When they call, they have a problem and for me; it’s a great day when I’m able to resolve those issues.”

Apparently, it’s a reputation for seeking justice that proceeds Stevenson. Not long ago, he met for the first time with a new client, a defendant in a serious felony case. The reaction of this client illustrates just how powerful Stevenson’s solid reputation is.

“When he saw me,” Stevenson recalls, “he said, ‘I was praying and praying, I didn’t know what was going to happen, but then I got this good feeling, like something positive was about to happen. Then you showed up to defend me.’”

If this were a movie, our protagonist would undoubtedly be riding off into the sunset either on his prized Harley Breakout or his even faster Turbo Hayabusa (which he stores in Zurich, Switzerland, to ride on the German autobahn). In reality, when he’s not immersed in the law or spending time with his daughter and grandson, Stevenson can be found in typical maverick style, either rock climbing, scuba diving or racing cars. Riding the Harley is a given, and his primary mode of transportation.

And despite the imperfections of our legal system, he’s still a fervent proponent.

“I really believe that attorneys are here to make things better,” he says. “I’m a very literal person who believes in all those clichés, like ‘the early bird gets the worm.’ That’s why I’m up every day around 5:30 a.m. I can’t wait to see what’s next.”