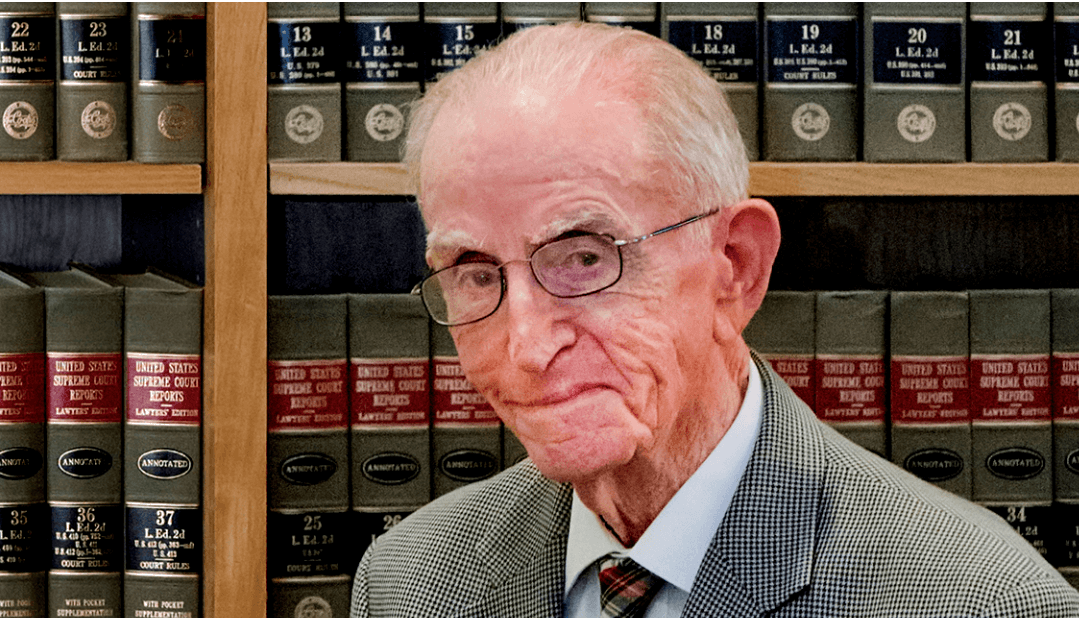 Raleigh criminal defense attorney Robert McMillan, Jr. stood at the back of the Wake County courtroom, talking with Ada Lee McLamb, a “rough-looking” 50-year-old and a “fine-looking” 30-year-old fellow. “Lawyer,” said the woman, “I want you to meet my honey; we’re gonna get married.”

McMillan, who had successfully represented McLamb in her murder trial several years earlier, looked the man in the eye and said, “Don’t you marry this woman; she’ll kill you. And inside of six months she killed him,” recalled McMillan.

He tells his stories with a precise narrative devoid of judgment. Having represented roughly 50 alleged murderers during his 65-year career, he is often asked, how he can represent a man or woman he knows is guilty. He answers, “The person who asks that is violating the mandate, judge not, lest ye be judged, and we must never forget the presumption of innocence.”

A deeply religious man, McMillan is a lifetime member of the Pullen Memorial Baptist Church. “He goes to a very openminded Baptist church and he has always been a very open-minded person himself and has tried to teach all of us to be open minded and to treat people the same way,” said North Carolina Special Deputy Attorney General Michael L. Dodd, a protégé of McMillan.

The Rule of Law

Robert L. McMillan, Jr. is generally referred to as the dean of the local bar and recognized as having bootstrapped the criminal bar in North Carolina from the backwaters to boasting some of the top criminal lawyers in America.

He was born and raised in Raleigh. His father, McMillian, Sr., was a highly-respected partner at Douglass & McMillan and prominent in local political circles.

Duncan McMillan, 62, McMillan’s son and legal partner said when his father was a child his mother had periodic episodes of depression. When she was ill, he was looked after by his three aunts. “They had a very profound impact on him,” Duncan said. “They were very religious, very conscientious, they instilled in him a belief that you should do everything you can to better the world around you.”

McMillan was an officer in the Marines during World War II and the Korean War. He graduated from Wake Forest University then earned his law degree from UNC in 1949. He joined his father’s firm where he learned the obligations of a lawyer. “They are to serve the rule of law, the opposite of chaos which ends up in tyranny,” he said. “The rule of law preserves liberty.”

McMillan speaks of the rule of law with a religious zeal. “I know that we are doing God’s will when we demand due process under the law,” he said. “I feel a high sense of calling when asked to defend the accused. It is my belief that Christ speaks to us when we stand with the one who is alone and afraid.”

The Mecca, a venerable, downtown Raleigh restaurant, has been the meeting place for generations of lawyers. Nestled into a well-worn booth with Roger and Wade Smith, McMillan said, “My life would be nothing without Roger-dodger and Wade.” He takes great pride in the attorneys he has mentored and helped including the Smiths, Fred Morlock, Michael Dodd, David Kirby, Robert Howard, William Plyler, Duncan McMillan, Steve Smith, Ray Briggs and scores of others. He is fiercely loyal to them.

Those attorneys will tell you McMillan neither preaches nor lectures. He said he is “teaching by osmosis.” Roger Smith concurred. “Robert taught by being. He just was. You just observed him going about his day-to-day tasks and you get a clue about how to conduct yourself.”

McMillan set a standard for how attorneys should treat prosecutors and judges. “It came from his military background and it came from a deep abiding respect and love of the legal profession,” said David Kirby.

In the early 1950s, when McMillan began handling criminal cases, many of the criminal defense lawyers in Raleigh were what he described as, “jacklegs and hangers-on. Not first-class lawyers.”

McMillan believes strongly in the sanctity of the United States’ legal system. “The defense lawyer, the judge, the prosecutor and everybody in the court system serves the system,” he said.

“I wanted the practice of criminal defense to be a more dignified, a more effective and more respected arm of the justice system in Wake County,” McMillan said. “I wanted to develop the criminal bar and establish it on a more professional basis that serves the rule of law as well as the client.

“I set out to treat every case, number-writer, bootlegger with dignity and respect and making sure that the rule of law applied to the number-writer or the prostitute or the bootlegger just like it applied to the most serious crime,” McMillan continued. “Every case becomes a part of the body of the law, like common law and each of those persons is entitled to a fair trial and if they don’t get a fair trial, the system is collapsing.”

Robert McMillan is neither bashful nor boastful when describing the impact he has on the Wake County criminal bar. “I consider myself a law abiding, church going, conscientious citizen but I don’t have any qualm at all about the importance of giving the ugliest criminal a fair trial in court,” he said. “I believe every human being is precious and I believe every human being has something divine in him.”