Ramón Abadin: Do the Right Thing and Be Nice About It 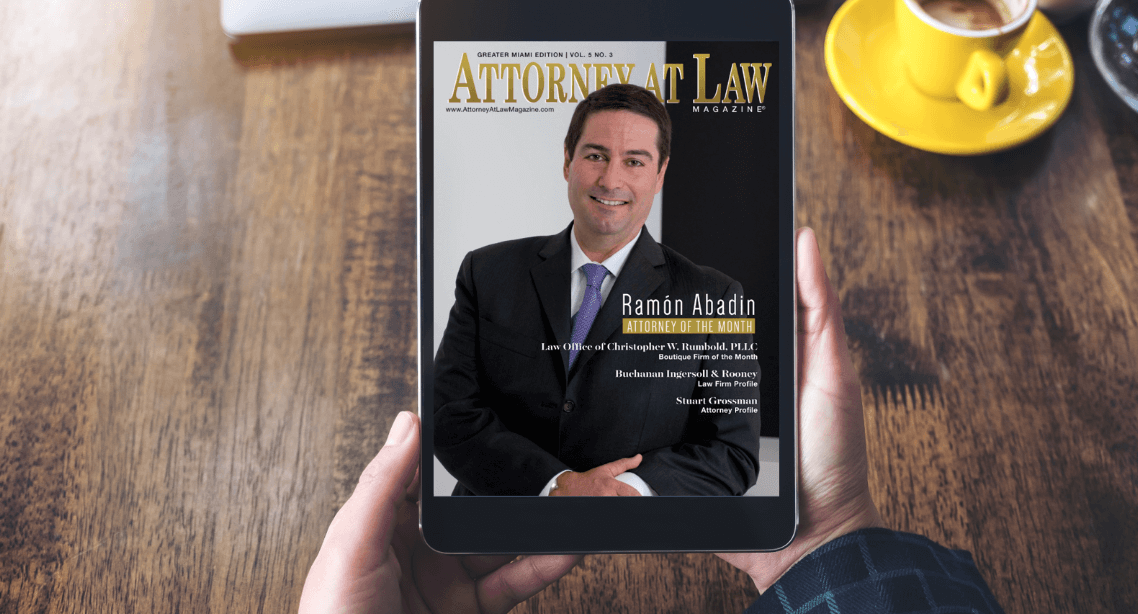 “Doing the right thing while being nice about it is challenging in a difficult world,” says Ramón Abadin, attorney at Sedgwick, LLP and president-elect of The Florida Bar.

“Human beings and their reactions are often the greatest challenge. It’s the way we’re wired. Human beings remember what they want to remember, sometimes intentionally and sometimes unconsciously – seeing things through their own perspective and life experiences. Sometimes those things are accurate and sometimes they are not. We have emotions that sometimes drive our memories, so the trial by jury is a place where all the complexities of the human being are put into play and are exposed to examination by judges, lawyers and juries to try to get the right decision where two people, two corporations or two entities have not been able to figure it out on their own or can’t or don’t want to. True, it’s an aspirational goal, but always one worth seeking,” he says.

These challenges can at times be daunting, but Abadin enjoys the process. “I love all of it. Developing themes, setting discovery strategy, learning about the case, presenting evidence, cross examining witnesses, finding the truth and making a good presentation to a jury. It sounds corny, but finding the truth is the ultimate goal – working through human perceptions, human understanding and the limitations of memory and reconstructing memories to try to get to what really happened so that whoever is right can get justice. It’s thrilling.”

Abadin, a member of the American College of Trial Lawyers, is an active trial lawyer for Sedgwick. He has tried more than 40 cases to verdict before state and federal courts. His focus is on complex commercial and tort matters. He has represented some of the world’s largest multinational corporations and insurance companies.

“Trials are dynamic. They’re never what you think they’re going to be. You have to be on your toes; you have to able to adapt and pivot on a pinhead during trial to things that come up,” he says.

In addition to his incoming position with The Florida Bar, Abadin is also a past president of the Cuban American Bar Association. He was born in Cuba and is fluent in Spanish and conversational in Portuguese.

LEADERSHIP IN A TIME OF CHANGE

“I am about to become president of the third largest mandatory bar in the country which represents 100,200 lawyers. Today, technology has allowed the entrance of many new players into the legal system, such as non-legal service providers, alternative business structures, more of a national and international footprint of firms. There is a lot of change, but I feel lucky to be leading a bar association through a time of dramatic change. It’s very exciting and also very challenging.”

Abadin’s father, who brought his family to the United States in 1961, stressed the importance of working with people toward common goals. “My father told me that at some point I would have to network and get to know people as part of my career.

About the time I was a 10-year lawyer and I was comfortable in the law, I had an understanding of what the law was like, I became involved with the Cuban American Bar Association in Miami.”

He took to being involved in important issues with dedicated people and soon found himself also active in the state bar association. “I like people. I like being around people, so I became active in the state bar. I like dealing with interesting and tough issues. I find those challenges and that’s probably why I like being a trial lawyer,” he says.

Success in networking, in associations and in the law is a matter of application, he says. “There’s no magic to it; it’s just a lot of hard work trying to do the right thing, trying to help people and being excited about it.”

Abadin began his career in Boston handling in-house legal matters for a marketing firm. Needing a change after two years, he moved to Florida where he worked at a series of law firms honing his law skills before he and his wife, Kim Cook, formed the Abadin Cook law firm. Sedgwick management wanted to open an office in Miami and approached Kim Cook and the couple soon joined Sedgwick as that office.

“With a bit of age and experience you ultimately gravitate to what you like and what you’re good at. It would be counter-intuitive to spend your life doing something you’re not good at and that you don’t enjoy,” he says.

“I sometimes miss the autonomy of running my own firm, but here we have much more opportunity and a much larger platform. I try bigger, more complicated cases and get a lot more support from a lot of very smart lawyers. And I’m free to concentrate completely on practicing law,” he says.

Abadin and Kim Cook met in law school in 1982 and have been married for 27 years. They have three kids and three dogs. The demands of his work leave little time for hobbies or outside interests, so Abadin focuses his out of the office time on his family, much of it on family trips.

“I’ve been lucky and have enjoyed a successful career. I’ve met a lot of people and have been helped by a lot of people along the way. I’ve been fortunate to have great mentors, great colleagues and great friends every step of the way. I am wealthy beyond imagination because of my relationship with my family and my many good friends,” he says.